Durian Fraud: 10 Tricks That May Deceive You 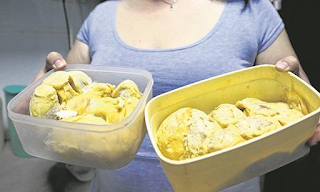 38-year-old customer service officer, Ms Ho, had never bought durians before in her life. But when a door-to-door durian seller dropped by her flat in Marine Parade one evening, she thought “just buy lah” since it was her birthday and her brother was coming over for dinner and she knew that he and her parents loved eating durians. The durian seller opened one of the durians and let Ms Ho sample the goods, and she found that it tasted pretty food, so she took her pick from the durians on sale. The 3 durians Ms Ho chose were weighed in front of her and showed “19” on the scale, leading Ms Ho to believe that the durians weighed 19 kilograms. She was charged S$285, but managed to bargain the price down to S$188.

Ms Ho was happy with her purchase, until she talked about it to her brother later that evening and he told her that durians weigh at most about 2kg each, and so 3 durians shouldn’t weigh more than 10kg in total. “I never bought durians before, so I wasn’t sure about the weight. When I heard ‘19kg’ I got a shock, but the man didn’t look suspicious and I even managed to bargain with him.”

Ms Ho says that the ‘19’ number on the scale could mean “pounds” instead of “kg” as there wasn’t any indication on the scale. She believes she has been cheated and wants to warn other durian lovers to beware of such “scammers”.

Resident pressured at her doorstep to buy six durians for $385

In his post, Mr Lau wrote that durian sellers went to his place and offered his wife some durians, which costs $15 per durian, claiming that it was of Mao Shan Wang (MSW) quality.

In an interview with TOC, Mr Lau said that the incident happened at around 7pm on 4 May at his place in Boon Keng.

He said that the two durian sellers, both male, told his domestic worker and Mrs Lau that they're visiting his estate again to revisit existing customers. Mr Lau said that the men told his wife that they were from Malaysia. "Recently there are these durian scams going around which i had experienced personally just yesterday night (Thursday) at the doorstep of my HDB flat. The seller was a Malaysian Chinese will keep insisting that you try first and no obligations to buy.

Then he will proceed to open the durians. After trying he will quote a price like $150 for 3 durians. When you refuse, he will not leave and insists that you buy at least the opened durian which costs $50 dollars. the seller was really insistent and refused to leave until i made call to police."

When the reader then called the police to inform them of the person peddling at his door and demanding to be paid an extravagant sum of money for the durians. When police call operator took up the phone, he told the operator that they will not get the guy if they come now as he had already ran off. She then took down his name and number and hung up immediately, which he assume to be dispatching the police to go after the man.

"There are three people you should never trust: Used car salesmen, lawyers, and durian vendors," joked Leslie Tay of Singapore's most popular foodie blog, ieatishootipost. We were sitting at one of his preferred durian stalls while I told him about our disappointing evening at Singapore's most famous durian hotspot: Sims Avenue in the Geylang District, also known as "Durian Street."

We had been warned about the Geylang durian crooks, but I was still incredulous as I described to Mr. Tay and his friend how a vendor earnestly tried to sell us a large Thai fruit under the name and price of "Musang King," the most expensive and prized durian on the market which sells for as much as 5 times the price of a Thai durian. This is an example of Durian Fraud, when durians are sold to customers illicitly, ripping the customer off through deceit or even causing sickness due to harmful chemicals (no joke!)

I've actually taken the definition for durian fraud almost word-for-word from Wikipedia's explanation of wine fraud. I just switched the word "wine" for "durian" because it's exactly the same concept. I guess durian culture is even more similar to the wine scene than I had imagined! During our travels, Rob and I came across many different techniques used by vendors hoping to pass off their hard-to-sell durian 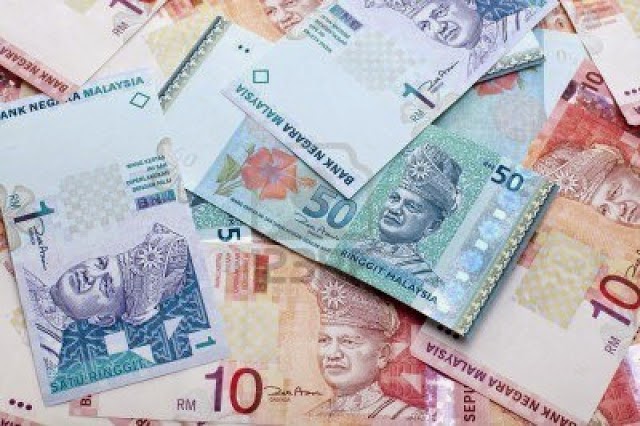 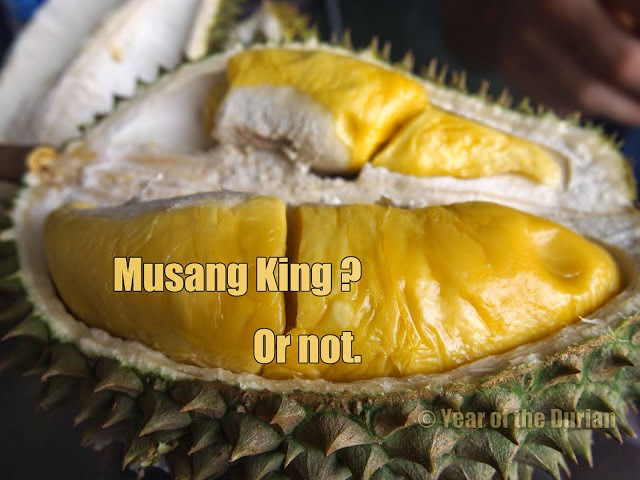 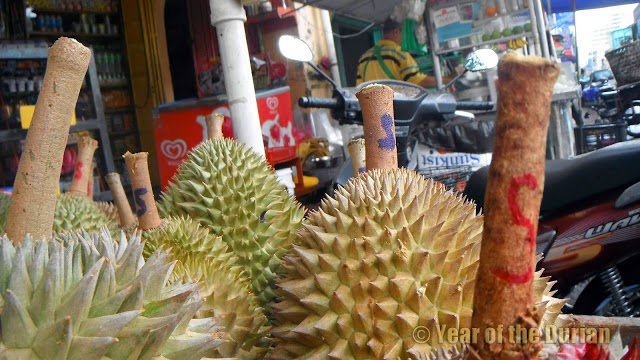 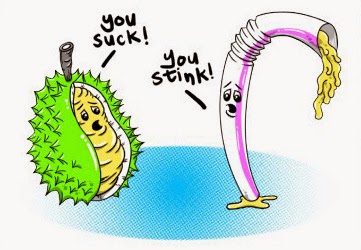 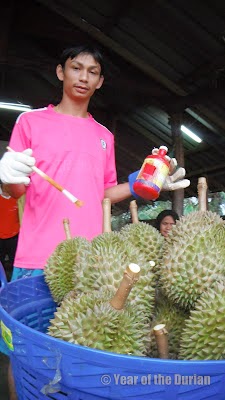 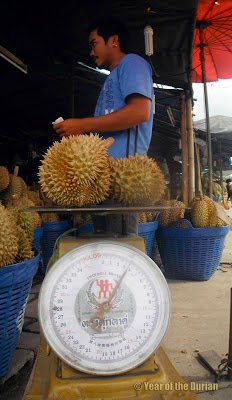 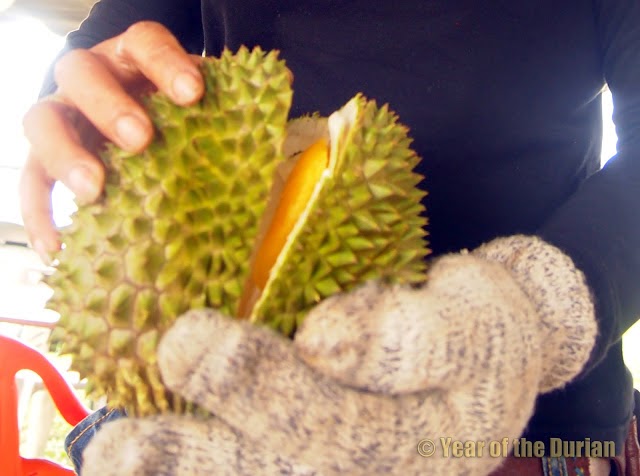 Trick #7: Hiding The Open Side 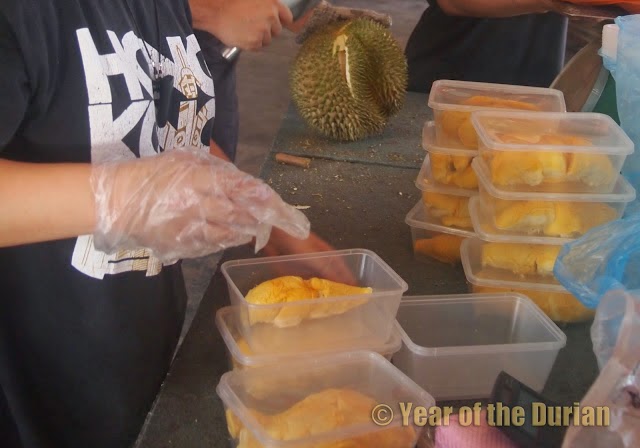 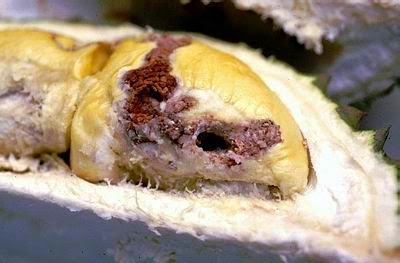 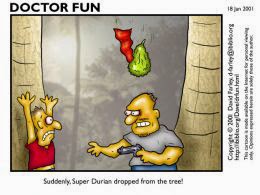 related: How to Identify Musang King and D24 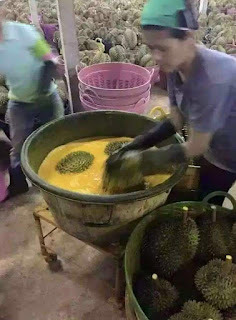 All durian lovers should know this.

Soaking durians in a chemical dye which will seep through to make the flesh very inviting.

Look like this dubious and very toxic chemicals to preserve the freshness and appearance of the fruits.

Satirical S’pore website wrote an article about durians being haram, people believed it 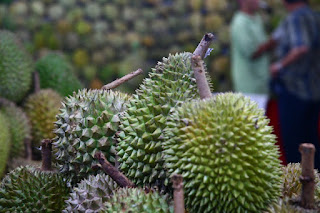 A good rule of thumb when browsing news on the Internet is, if you think the news is too good/ wacky/ incredible/ (insert adjective here) to be true, it probably is.

Local satirical website Mufti News recently published an article, “Grand Mufti declares durians haram“, on how durians had been declared haram by the Grand Mufti (a Muslim legal expert who is empowered to give rulings on religious matters) of the “International Islamic School of the Leap of Faith”

The piece was inspired by complaints made over a durian eating competition held during the month of Ramadan. 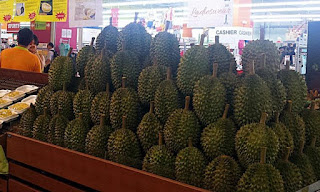 Peace was shattered over the weekend at Jurong Mall in the small country of Singapore when Singaporean Muslims found out of the injustice being served as local fruit store Fig Fox held an all you can eat Durian Event during the holy month of Ramadan.

Disgruntled Muslims from Singapore took to facebook taking umbrage to the event feeling like the company had purposely organised this event to test their faith and tempting them away from the sunnah.

While Fig Fox already stated that there was an evening all you can buffet from 6pm to 8pm, they were still relentlessly hounded by hordes of unmuslim like demands to have the buffet from 7pm to 9pm.

Marketing lessons from Durian trade
The hybrids of Durians
Wild durians of Borneo
Fakes and frauds
Fake Meat: The Meat Glue Secret
Beware of fake eggs 假鸡蛋如何分别
Watch What You Eat: Gutter Oil?
What Are Chicken Nuggets Made Of?
Fake and Man-Made Jellyfish
Artificial And Fake Rice
Fake Cabbage And Lettuce
Fake And Synthetic Noodles
Wine Fraud: A Vintage Crime
Artificial Chin Chow 仙草 (Grass Jelly)
Posted by Under The Angsana Tree at 09:36