The seventh day of the Chinese New Year is Yan Yat, Everybody’s Birthday. The Goddess Nüwa created human beings by molding them from clay. Farmers make a drink from seven types of vegetables. Noodles are eaten to promote longevity and raw fish for success.
read more

Renri (Chinese:人日, literally Human Day) refers specially to the 7th day of zhengyue (正月, the first month in the Chinese calendar). According to Chinese customs, renri was the day human beings were created. It is celebrated not only in China, but also other regions influenced by Chinese culture.

According to legend, the custom dates back to the Han Dynasty, and gained importance after The Three Kingdoms period and Jin Dynasty. Traditional Chinese wear Rensheng (人勝) on their heads, or put sliced gold on pingfeng and hair. Poems are also composed on this day. Emperors after Tang Dynasty may grant beautiful clothing to his followers on this day.

If the weather on renri is fine, it can be forecast that God will grant good luck to all people on earth. Fireworks andHua Pao (花炮) are lit, so renri celebrates the "birthday" of fire as well.

Since the first days of zhengyue are considered "birthdays" of different animals, Chinese people avoid killing the animals on the respective birthday and punishing prisoners on renri.

The seventh day, traditionally known as Rénrì (人日, the common person's birthday), is the day when everyone grows one year older.

In some overseas Chinese communities in Southeast Asia, such as Malaysia and Singapore, it is also the day when tossed raw fish salad, yusheng, is eaten for continued wealth and prosperity.

For many Chinese Buddhists, this is another day to avoid meat, the seventh day commemorating the birth of Sakra, lord of the devas in Buddhist cosmology who is analogous to the Jade Emperor.

Kindness for All-Season: Well wishes beyond the New Year 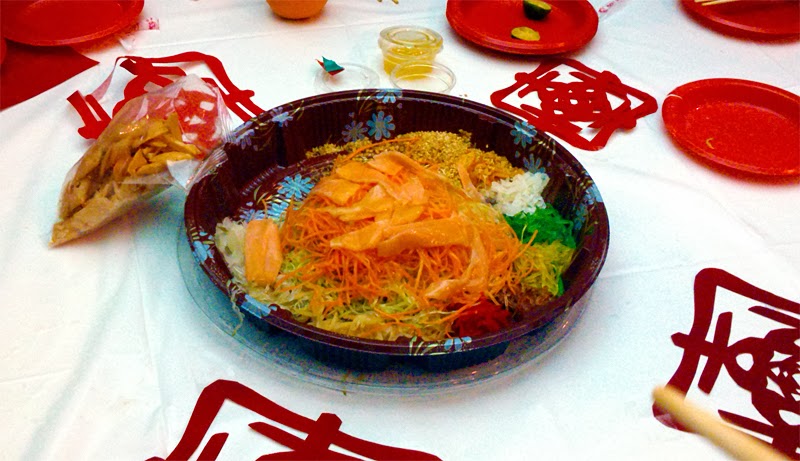 Lo Hei is a wonderful local tradition that stems from the Cantonese dialect, meaning  ‘tossing up good fortune’. It is the tossing of a salad with Yu Sheng or raw fish as the key ingredient. The pronunciation Yu Sheng sounds like 'overflowing abundance' and therefore symbolises ‘an abundance of wealth and long life’. The word hei in Lo Hei means ‘rise’. It refers to a thriving business, hence it is understandably a very popular ritual with  businessmen during the New Year.

From the kindness perspective, the ritual of Lo Hei is a very gracious act – an act where everyone wishes each other the best in every aspect of life.  There are many Chinese four-character phrases to express their kind greetings.

The ritual begins by wishing everyone  prosperity (gong xi fa cai) and moves on to identify some ten ingredients, each sounds like and therefore represents a kind wish. For example, fish sounds like “abundance”, so you say “wish you an overflowing abundance every year” (nian nian you yu). Green radish represents youthfulness, so you wish everyone eternal youthfulness (qing chun chang zhu). The plum source is usually added in last and since it is sweet, it therefore symbolises a sweet and pleasant relationship.  So we wish each other just that (tian tian mi mi), and so on. The mixture is then tossed 7 times as high as you can with loud shouts of “lo hei”.  You may shout  the auspicious four-character phrases as well.

It usually consists of strips of raw fish (most commonly salmon), mixed with shredded vegetables and a variety of sauces and condiments, among other ingredients. Yusheng literally means "raw fish" but since "fish (鱼)" is commonly conflated with itshomophone "abundance (余)", Yúshēng (鱼生) is interpreted as a homophone for Yúshēng (余升) meaning an increase in abundance. Therefore, yusheng is considered a symbol of abundance, prosperity and vigor.

While versions of it are thought to have existed in China, the contemporary version is created and popularised in the 1960s amongst theethnic Chinese community and its consumption has been associated with Chinese New Year festivities in Malaysia, Indonesia and Singapore. In Malaysia and Singapore, government, community and business leaders often take the lead in serving the dish as part of official functions during the festive period or in private celebrity dinners.

Eating Yu Sheng during Chinese New Year is a cultural activity for Chinese living in Singapore and Malaysia, but not so much in other Chinese-populated countries such as Hong Kong, where the practice is almost unheard of. This may be due to the origins of the dish, which was created by 4 master chefs in a Singapore restaurant kitchen way back in 1964,

Meaning of the ingredients 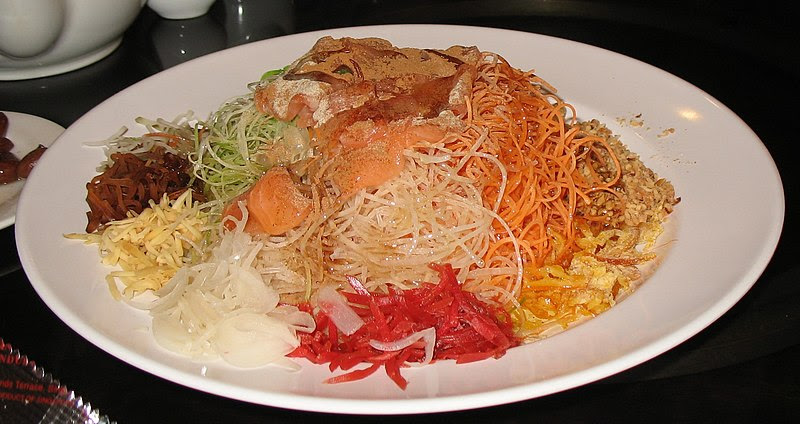 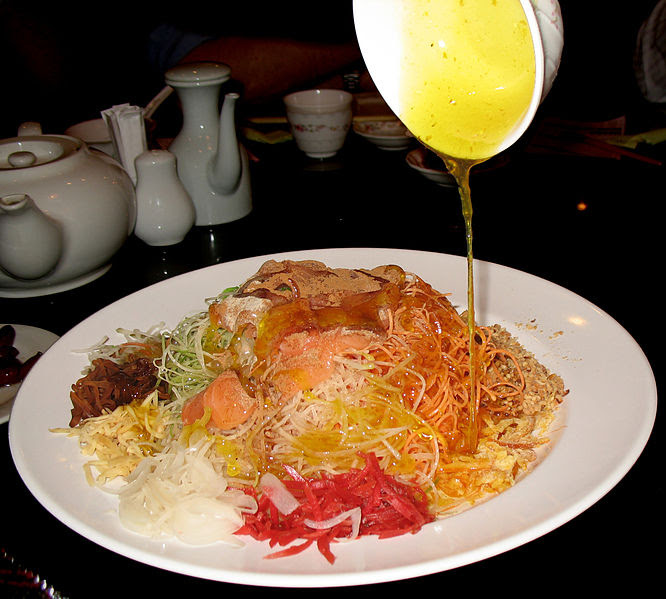 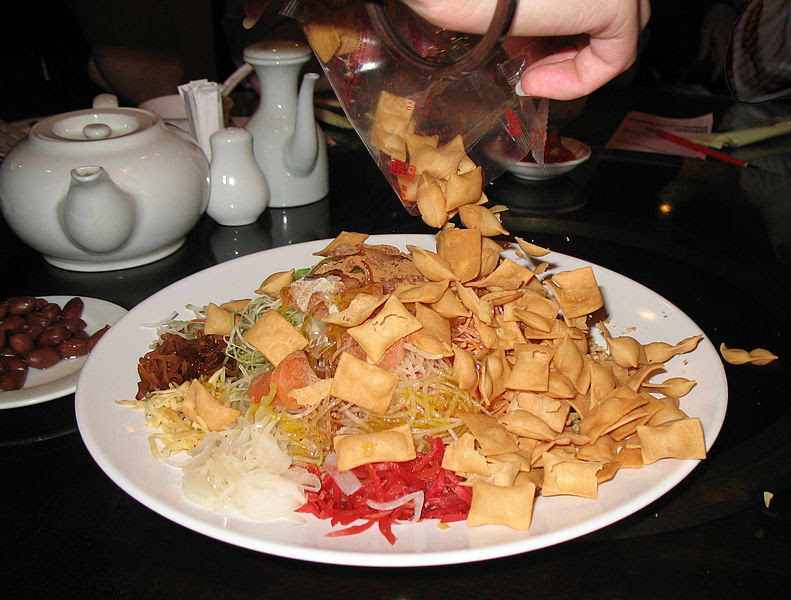 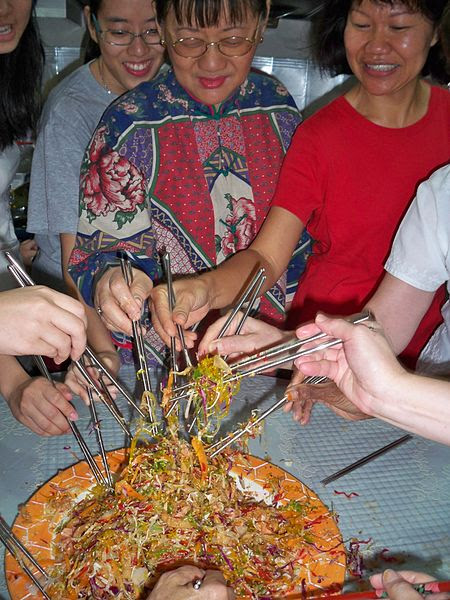 When putting the yu sheng on the table offers New Year greetings.

The fish is added, symbolising abundance and excess through the year. 年年有余 (Nian Nian You Yu) meaning “Abundance through the year”, as the word "fish" in Mandarin also sounds like "Abundance".

Pepper is then dashed over in the hope of attracting more money and valuables. 招财进宝 Zhao Cai Jin Bao meaning “Attract wealth and treasures”

Then oil is poured out, circling the ingredients and encouraging money to flow in from all directions. 一本万利 Yi Ben Wan Li meaning “Make 10,000 times of profit with your capital” 财源广进 Cai Yuan Guang Jin meaning “Numerous sources of wealth”

The condiments are finally added.

Deep-fried flour crisps in the shape of golden pillows is then added with wishes that literally the whole floor would be filled with gold. 满地黄金 Man Di Huang Jin meaning “Floor full of gold” 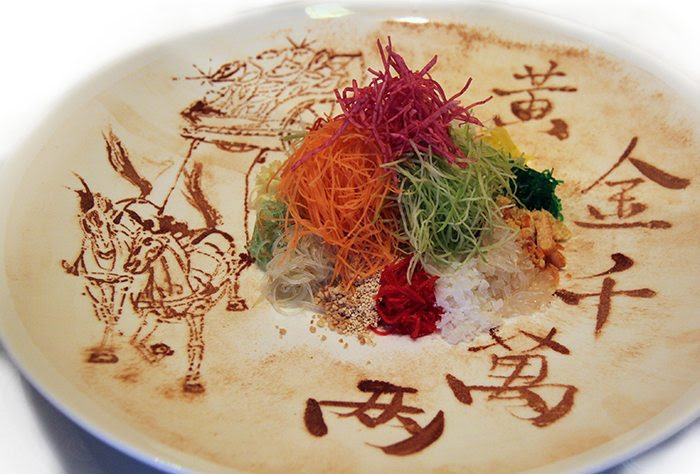 Huat Ah!
Posted by Under The Angsana Tree at 18:18