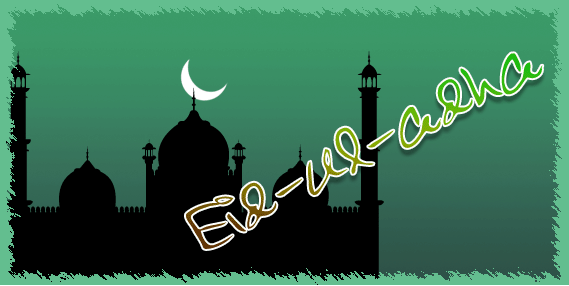 Hari Raya Haji, otherwise known as the “Festival of Sacrifice”, is celebrated over a period of four days by Muslims in Islamic countries. It commemorates Prophet Ibrahim (Abraham)’s unwavering faith and trust in God, demonstrated through his willingness to sacrifice his son Ismail (Ishmael) as an act of submission to God’s command. According to the Islamic calendar, this festival starts on the 10th day of the month of Zulhijjah.

Aside from this, the theme of sacrifice is also salient in how Hari Raya Haji marks the end of Hajj. The largest annual pilgrimage in the world, Hajj sees thousands of pilgrims converging on the Holy Land of Mecca to perform a series of symbolic rituals. The journey to Mecca is an arduous one, and thus calls for pilgrims to make significant physical and spiritual sacrifices. The journey also demonstrates the powerful unity between Muslim brotherhood and sisterhood as pilgrims come together in solidarity. The Hajj is considered the fifth pillar of Islam, and is a religious obligation for able-bodied Muslims with the financial means.

During Hari Raya Haji, which is also a public holiday, male volunteers congregate in the mosques to offer their prayers and reflect upon the sermons that are read out. This day, which is set aside to observe the ethics and practices of the Muslim community, serves as a reminder to share one’s wealth with the less fortunate. After performing the customary Hari Raya Haji prayers, these volunteers then sacrifice sheep, goats and cows – which is symbolic of the willingness of Prophet Ibrahim to sacrifice his own flesh and blood for God. Following which, the cattle meat is packed and distributed among the Muslim community, especially to families who are less fortunate.

After a long day of carrying out customary practices, the Muslims would then pay a visit to their parents, families and friends, and come together for a hearty meal.

Thousands of Muslims across Singapore gathered at 69 mosques for prayers to mark Hari Raya Haji, the Festival of Sacrifice on Sunday morning.

Throughout the day, 26 mosques will also be performing the Islamic sacrificial ritual of Korban, where livestock - in this case imported sheep and lamb - are slaughtered and the meat distributed to family, friends and the needy.

Preparations for the ritual hit a bump in the road on Friday when 174 Australian sheep died en-route on a SIA Cargo flight from Perth to Singapore. Early investigations show that they died of heat stress. 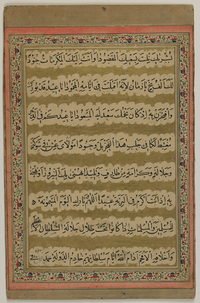 Eid al-Adha (Arabic: عيد الأضحى‎ ʿīd al-aḍḥā [ʕiːd ælˈʔɑdˤħæ] meaning "Festival of the sacrifice"), also called the Feast of the Sacrifice (Turkish: Kurban Bayramı; Bosnian: Kurban Bajram; Persian: عید قربان‎, Eid-e qorban), the "Major Festival", the "GreaterEid", Baqr'Eid (Urdu: بقر عید‎), or Tabaski (West Africa), is the second of two religious holidays celebrated by Muslims worldwide each year. It honors the willingness of Abraham (Ibrahim) to sacrifice his promised son. Ishmael (Ismail) as an act of submission toGod's command, before God then intervened to provide Abraham with a lamb to sacrifice instead. The meat from the sacrificed animal is preferred to be divided into three parts. The family retains one third of the share; another third is given to relatives, friends and neighbors; and the remaining third is given to the poor and needy.

In the lunar-based Islamic calendar, Eid al-Adha falls on the 10th day of Dhu al-Hijjah and lasts for four days. In the international Gregorian calendar, the dates vary from year to year, drifting approximately 11 days earlier each year.

Eid al-Adha is the latter of the two Eid holidays, the former being Eid al-Fitr. The basis for the observance comes from the 196th ayah (verse) of Al-Baqara, the second sura of the Quran. The word "Eid" appears once in Al-Ma'ida, the fifth sura of the Quran, with the meaning "solemn festival".

Like Eid al-Fitr, Eid al-Adha begins with a Sunnah prayer of two rakats followed by a sermon (khutbah). Eid al-Adha celebrations start after the descent of the Hujjaj from Mount Arafat, a hill east of Mecca. Eid sacrifice may take place until sunset on the 13th day of Dhu al-Hijjah. The days of Eid have been singled out in the Hadith as "days of remembrance". The takbir (days) of Tashriq are from the Fajr prayer of the 9th of Dhul Hijjah up to the Asr prayer of the 13th of Dhul Hijjah (5 days and 4 nights). This equals 23 prayers: 5 on the 9th–12th, which equals 20, and 3 on the 13th. 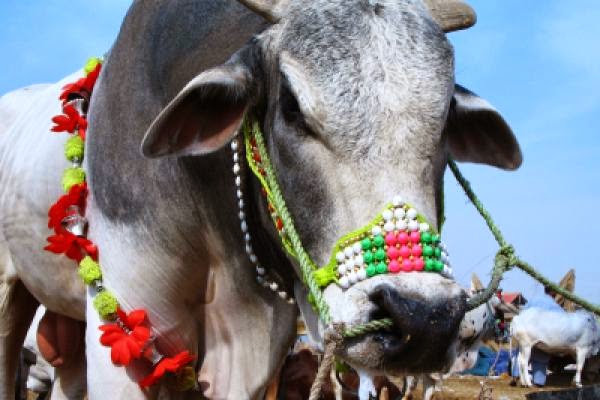 Animals are decorated in plastic jewellery for Eid al-Adha, a holiday celebrated in memory of Abraham's sacrifice

Eid al-Adha is an Islamic festival to commemorate the willingness of Ibrahim (also known as Abraham) to follow Allah's (God's) command to sacrifice his son Ishmael. Muslims around the world observe this event.

At Eid al-Adha, many Muslims make a special effort to pray and listen to a sermon at a mosque. They also wear new clothes, visit family members and friends and may symbolically sacrifice an animal in an act known as qurbani. This represents the animal that Ibrahim sacrificed in the place of his son.

In some traditionally Muslim countries, families or groups of families may purchase an animal known as udhiya, usually a goat or sheep, to sacrifice, but this is not common or legal in many parts of Australia, Canada, New Zealand, the United Kingdom, the United States or many other countries. In these countries, groups of people may purchase a whole carcass from a butcher or slaughterhouse and divide it amongst themselves or just buy generous portions of meat for a communal meal on Eid-al-Adha. People also give money to enable poorer members of their local community and around the world to eat a meat-based meal.

In the period around Eid al-Adha, many Muslims travel to Mecca and the surrounding area in Saudi Arabia to perform the Hajj pilgrimage. Package holidays are organized from many countries. Muslims may plan and save for many years to enable them to take part in this event, which is one of the five pillars of Islam. 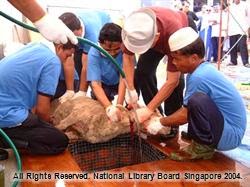 Hari Raya Haji (which means “great day of the haj” in Malay), also known as Aidiladha (alternatively spelt as Eid al-Adha or Eid Adha) or the Great Day of Sacrifice, is a Muslim festival that falls on the 10th day of Zulhijjah (the 12th month in the Islamic calendar). The festival marks the end of the haj, which is the Muslim pilgrimage to the holy city of Mecca in Saudi Arabia. It also commemorates the willingness of the Islamic prophet Ibrahim to sacrifice his son Ismail in an act of obedience to Allah (God). One of the main rituals of the festival is the korban, which involves the sacrificial slaughtering of livestock. It is one of two major Muslim festivals in Singapore that are celebrated as public holidays (the other being Hari Raya Puasa).

Background - Hari Raya Haji is celebrated to mark the end of the Muslim pilgrimage known as the haj. According to the fifth pillar of Islam, all able-bodied Muslims who can afford to do so are obliged to undertake this pilgrimage at least once in their lifetime. The haj retraces the journey of Prophet Muhammad’s pilgrimage to Mecca and must be undertaken during Zulhijjah, the 12th month of the Islamic calendar.

The festival also commemorates the story of Ibrahim and his son Ismail, both of whom were said to have been guided by Allah to build the Kaaba: a square stone building in the centre of the Great Mosque in Mecca that is considered by Muslims to be their most holy site. It is in the direction of the Kabaa that all Muslims face during prayers.

According to the story found in the Quran, Allah one day commanded Ibrahim to sacrifice his son Ismail as a test of his obedience. Just as Ibrahim was about to carry out this command, Allah intervened to stop him and allowed for the sacrifice of a sheep in place of his son. Ibrahim’s exemplary act of sacrifice and obedience to Allah is commemorated during Hari Raya Haji through the ritual of korban, which involves the sacrificial offering of livestock.

read more
Posted by Under The Angsana Tree at 05:10