Hail the King of Fruits

5 Reasons Why Durian Is the King of Fruit 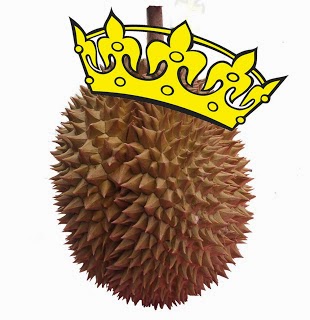 Durian is affectionately called the King of Fruit throughout Southeast Asia. With it's size, bristly appearance, and fanatic following, it's an appropriate nickname.

But like in any empire, there is more than one claim to the throne. The Aztecs once hailed the avocado as King. In India, the mango reigns supreme. To find out which fruit deserves the crown, Rob and I traveled to the International Mango Festival in Delhi. Our verdict is in, and here's why.

10 types of durians from Malaysia 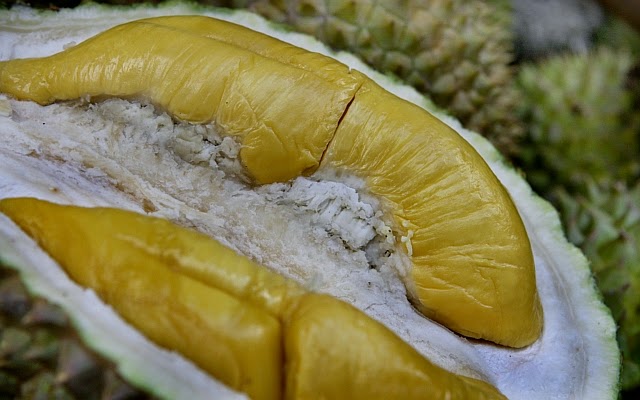 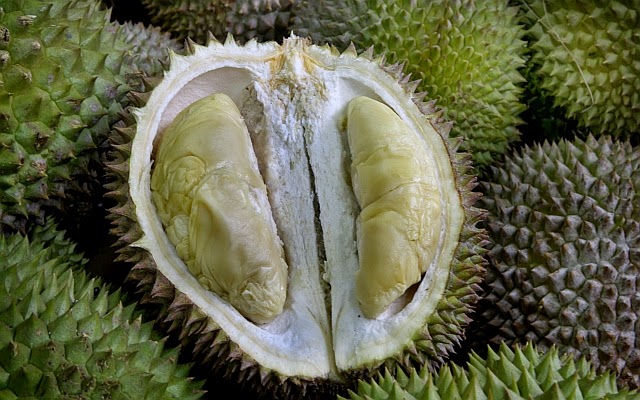 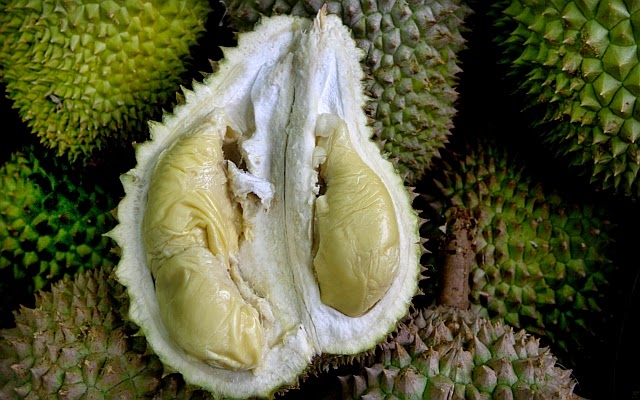 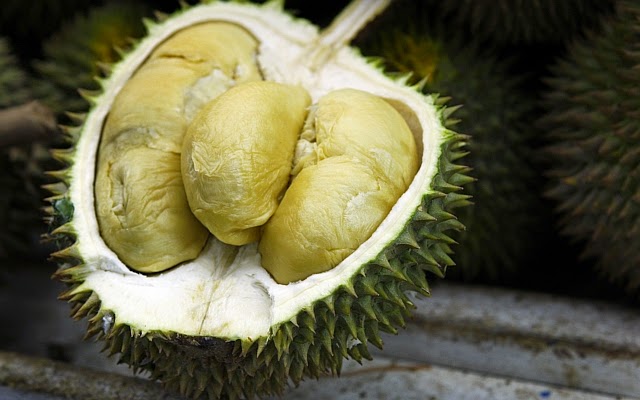 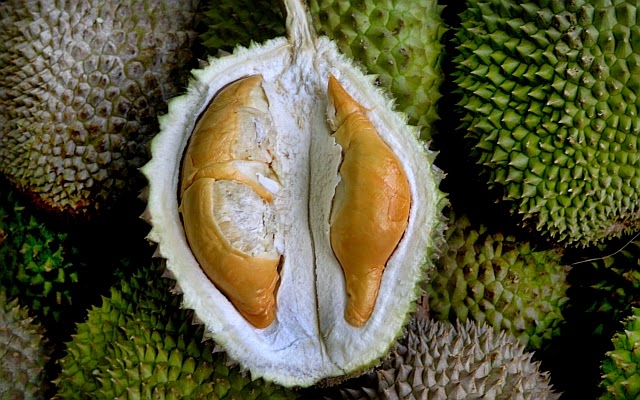 5. D13
Colour: Deep burnt orange
Taste notes: Sweet, less fibrous than most durians and not very strong in taste. This durian has large seeds. Good for people trying durians for the first time
From: Johor, Segamat 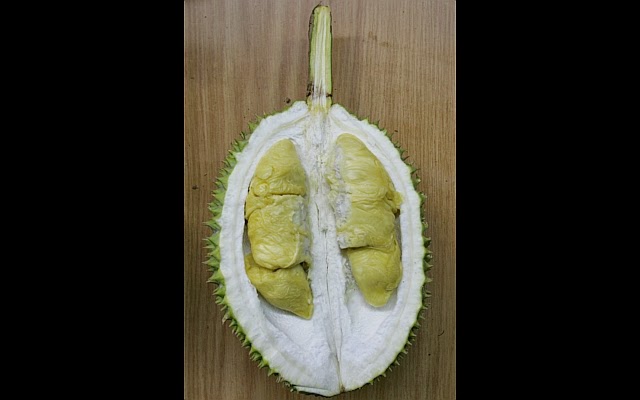 6. D1
Colour: Pale yellow
Taste notes: Small seeds, milky taste. The flesh slips off the seeds and has a light crunch on the surf
From: Johor 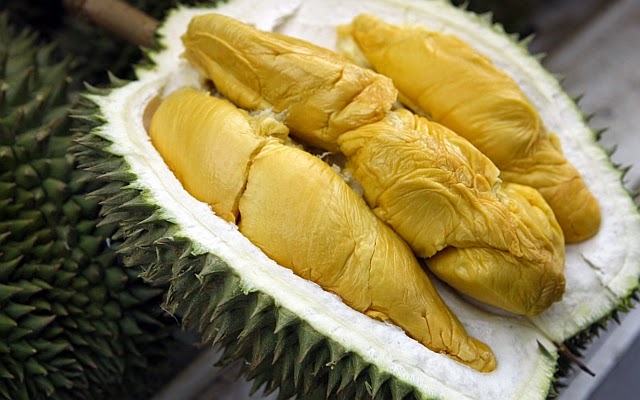 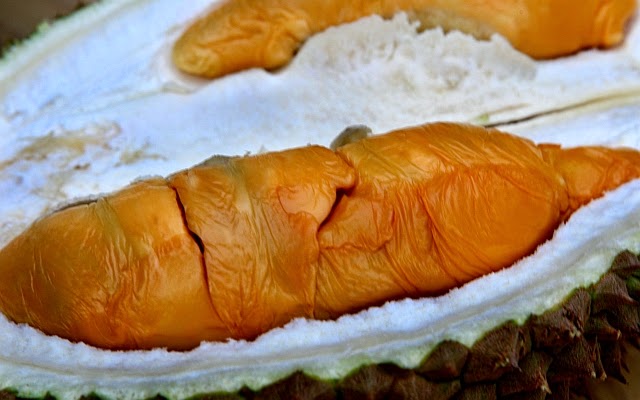 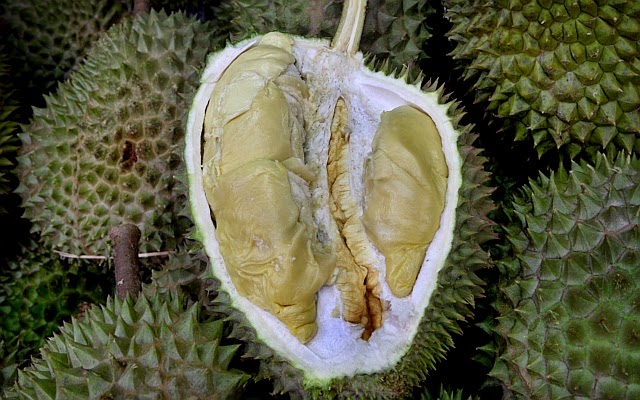 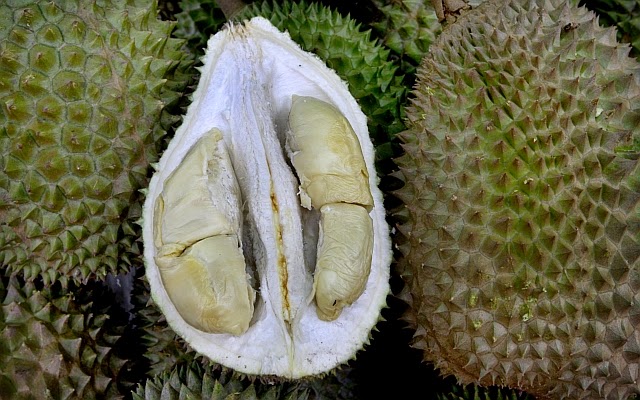 All Hail the King of Fruits 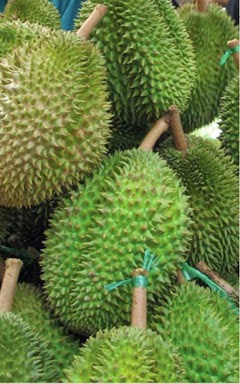 In Singapore, they often go by various Chinese epithets -mau shan wang (mountain cat king), qing zhu (green bamboo), hong xia (red prawn), hei zhen zhu (black pearl), jin feng (golden Phoenix) - or by slightly less alluring alphanumeric designations such as XO, D2, D13 or D24. If you do not recognise these immediately, chances are you have only recently arrived in Singapore or are culturally oblivious, for these names represent different cultivated varieties of durians, the stuff of frugivorous dreams (or nightmares).

Whenever you see suddenly appearing from out of forest undergrowth along Nanyang Avenue, pushing bicycles with bulging plastic bags dangling from handlebars, tied to the back or stuffed into baskets up front, there can only be one implication - durian season has arrived. The season will have arrived at NIE, too, for the institute has its own patch of durians behind Science Block, the remnant of a former fruit orchard. Prof Gan Yik Yuen (Natural Sciences and Science Education), who has studied the finer points of durian biology, is helping to uncover the genetic secrets of the King of Fruits.

NIE durians are not the fancy designer- brand kinds that sell for outrageous prices at Geylang. They are the salt of the earth, old fashioned, evocative type - kampong durians. The kind that the forefathers knew; not grafted, not cloned, but planted from seeds as Nature intended them to be. They may lack the nuanced aromas, flavours and textures of their upmarket Geylang cousins but the humble kampung durian has something much more precious, qualities that educators can relate to - diversity and the ability to surprise. They are not mass- customised products but the type where every tree produces a different flavoured fruit, each with its own character, idiosyncratic, occasionally disappointing but never boring.

All Hail, the King of Fruits 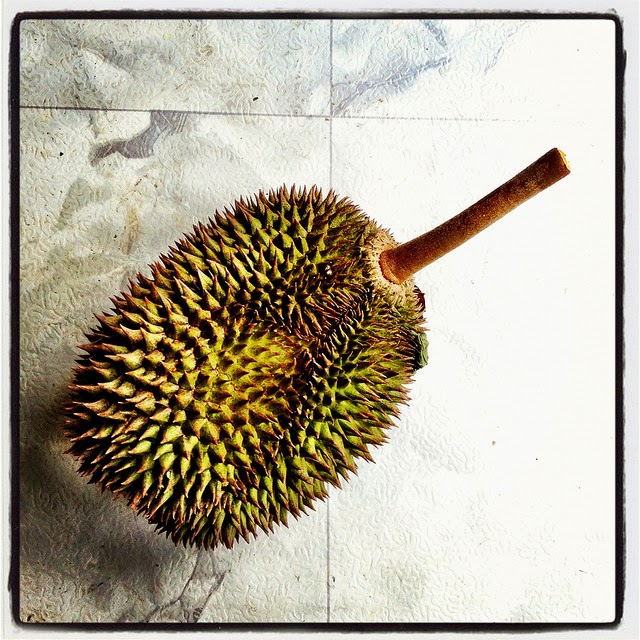 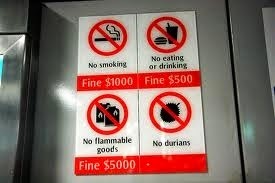 For the uninitiated, this is a durian, the king of fruits. At least as far as I am concerned. This fruit is revered in this part of the world where I live. Singaporeans love it. Malaysians love it. Bruneians love it. Indonesians love it. Thais love it. The Chinese love it (just ask Stanley Ho). Everyone else seems to hate it. Poor fruit.

So why is something so much loved, revered, to a point of being worshiped, drawing so much flak from westerners?

Well, for one thing, it is certainly because of two things. The first of which, the durian’s smell is extremely pungent. But to us Asians, perhaps pungent is not a good way to describe it. We would probably call it fragrant. Bring a durian or two into a small room and soon that oh-so-tantalizing whiff will start to fill the air, and of course, you will be at the center of everyone’s attention.

Hail to the king! An Ill-Deserved Reputation 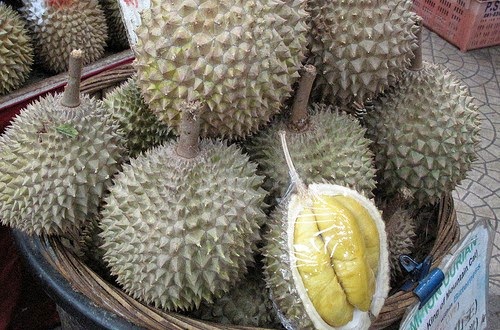 It’s been compared to rotting flesh, bad cheese and skunk urine. It’s often banned in hotels and public transport throughout Southeast Asia. Its flesh is fragrant enough to attract monkeys a mile away. Yet after a few evenings spent with my friend Audran, getting to know the much-vilified fruit better, durian is fast becoming my favorite fruit.

There’s no denying durian has a strong smell. As soon as its shell cracks and it starts to ripen, the stench will fill the air faster than a fart. In a crowded elevator, things get downright hostile. The stink some North Americans associate with Chinatown is often due to the pungent fruit alone: you’d be hard-pressed to distinguish durian and rotten meat in a blind smell test.

But don’t let the olfactory assault detract you: some of the best things in life can give off quite a stench. There’s nothing quite like the dirty socks smell of an old, runny Camembert, yet the French express only love for their cheese. Likewise, we generally do not turn up our nose on a fine Sauerkraut, or the mature bitterness of a stout beer. But introduce an unfamiliar food that stinks, and suddenly you hear “garbage”, “rotting meat” or “gym sock”; we reserve words such as “complex”, “pungent” and “commanding” only for the stinks we have grown with. Leave your inhibitions behind! Embrace the stink!

Hail to the King of Fruit! 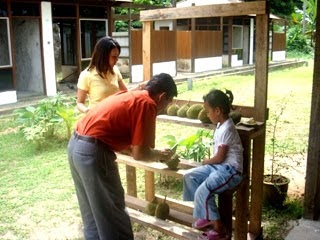 Don't you just love the Durian Season? Thanks to Uncle Zolhaili (honey's dad), Gna, and the rest for providing us the best fruits ever :)

These pics were taken during our trip to Dusun Tua Spa @ Hulu Langat. Gna, the chocolate fountain was fantastic and i wanna own it too! Slurrrppp..Sorry if you think some of the pix showing that im so gelojoh eating durian.!

Baby, i think if u are here, you will not be a part of this durian trip gang kot . i know how much you hate durian kan?? 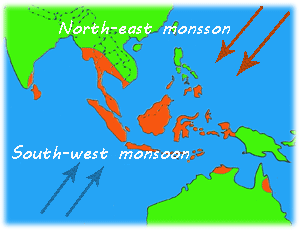 The common durian (Durio zibethinus L.) and many tropical fruit trees require a dry spell of about one to two months for flowers to initiate and develop fully into fruits. In South East Asia where the durian is "The King of Fruits", the durian production season is greatly influence by the north-east and south-west monsoons. In between the wet monsoons is the dry weather that triggers the matured durian trees to develop flower buds on healthy lateral branches. It usually takes about four weeks for the buds to develop fully into perfect flowers.

Durian flowers are borne in clusters of 3–10 flowers over a period of about two to four weeks during the dry season. The durian has a high rate of self-incompatibility and it is normal to get 20% to 25% fruit-set. Thus, cross-pollination is essential to obtaining good crops. Fruit development usually takes 95–130 days, depending on the cultivar. The tree must receive just enough water for proper fruit development.. Too much water will cause the tree to bear new leaves at the expense of the fruits. Under normal conditions, fruit ripening heralds the start of the rainy season.

The durian season in the major durian-growing countries of Thailand, West Malaysia and Indonesia generally peaks in the middle of the year around June-July as shown in the chart below 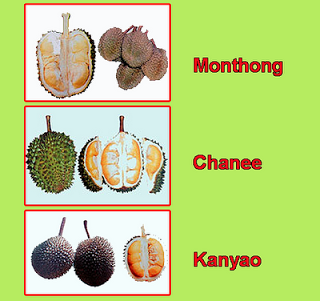 There are 234 varieties registered with the government of which about 60-80 varieties are commercially cultivated. They are generally divided into 3 groups according to maturity indices:
Of all the cultivated durian areas in Thailand, Monthong comprises 41%, Chanee 33%, Kan Yau 5%, Gradum-tong 2% and the rest are minor varieties. 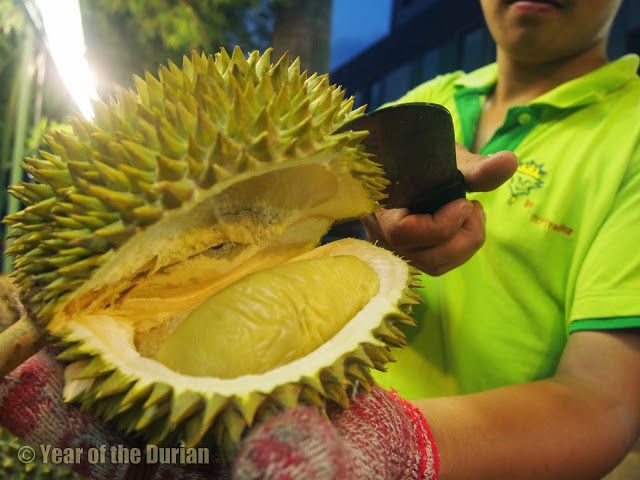 Unbeknownst to most, Singapore also has its own durian varieties. In addition to the various wild durian still found today in the last forested regions, this fantastic durian resource notes that Singapore has three of its own registered durian varieties.
Unfortunately, these fruits can only be found in agriculture parks and research centers and are not for sale.

What about Singapore durians you can actually eat? Here are a few of the most popular varieties found in Singapore markets: 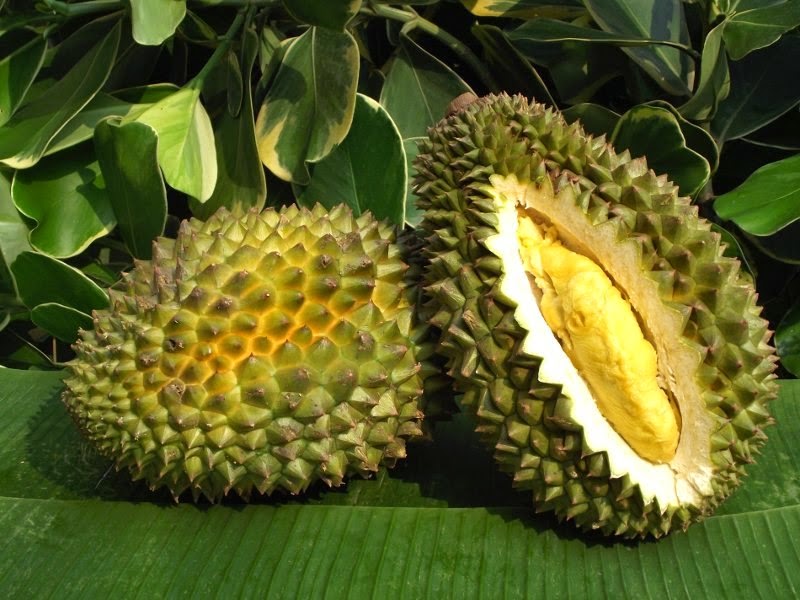 Chanee - Chanee is the most bitter of the Thai durians, which stands out for its large, square green spikes. It grows widely in northern Malaysia, were it is allowed to ripen naturally, although it is being phased out for other varieties. 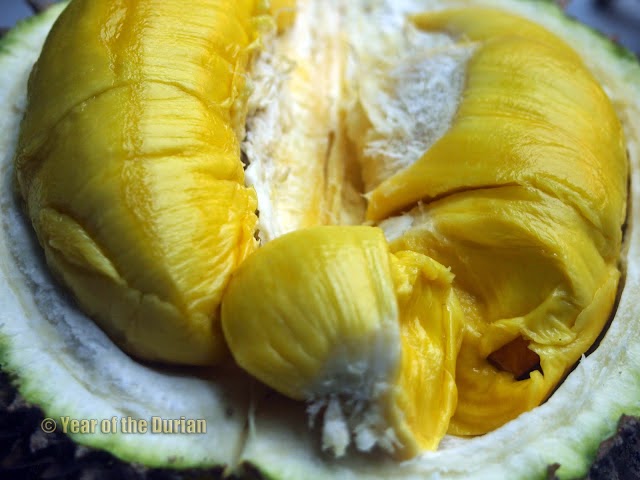 Mao Shan Wang - Mao Shan Wang is the Chinese name for Musang King variety, and amazingly is similar both phonetically and in meaning. Mao Shan Wang means literally "Cat Mountain King," while Musang King means "Civet Cat King." Mao Shan Wang is currently the most popular and the most expensive durian in Singapore, averaging around $20 SGD per kilo. It is recognizable by its brilliant yellow color, firm yet soft flesh, and smooth texture. Worth the price, if you can afford it. 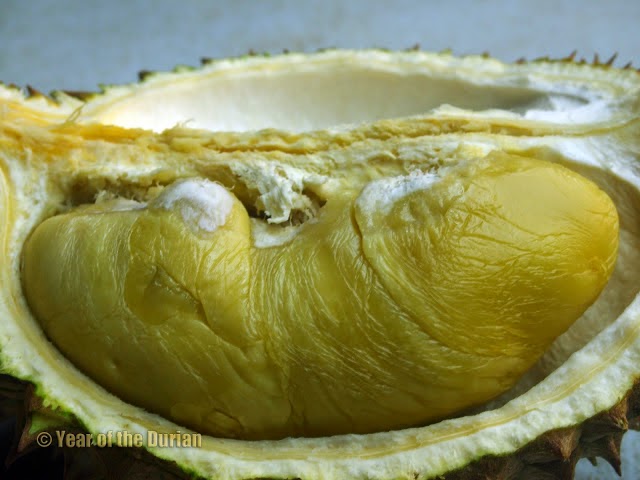 D24 - Sometimes known as Sultan, D24 is the second most popular variety in Singapore. When hybrid durians first hit the markets in the 1980's, D24 was hot stuff and the most expensive durian on the market. It's since been surpassed in popularity, but remains a reliably good durian for a good price. An interesting characteristic of D24 is the tendency of the flesh to maintain its form, often lifting away from the shell. 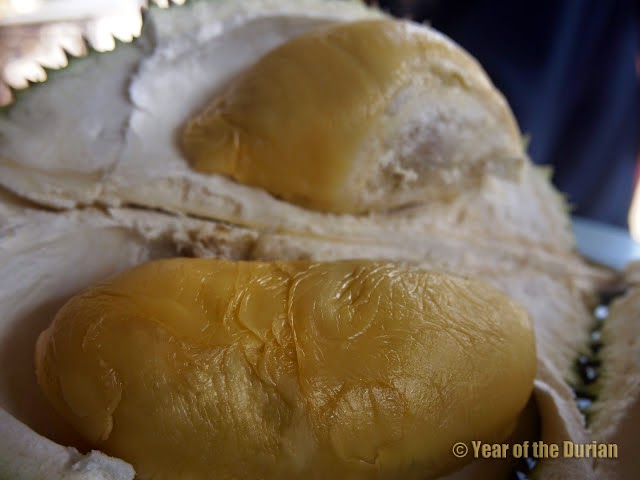 XO - XO is named after a premium brandy, and is said to be especially nuanced and bitter. Really, it's the name given to high quality D24 durians grown at a high elevation with well-drained soil. It is generally very fleshy and has huge, rotund pods with only one or two seeds. 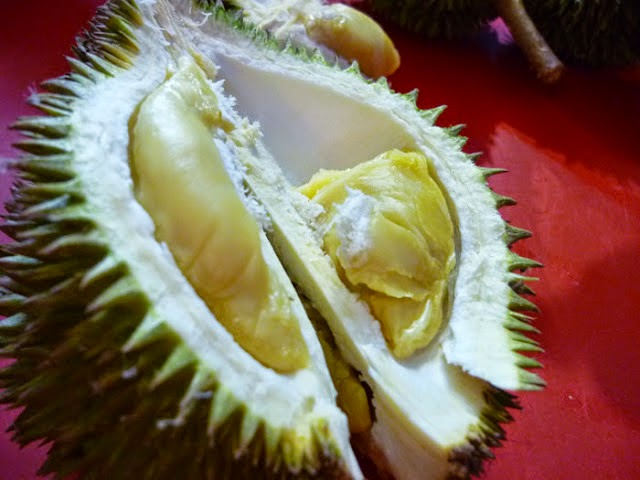 Jin Feng (Golden Phoenix) - Golden Phoenix is a pale durian with very soft, wet flesh. It is said to be almost as good as Mao Shan Wang, but more affordable. 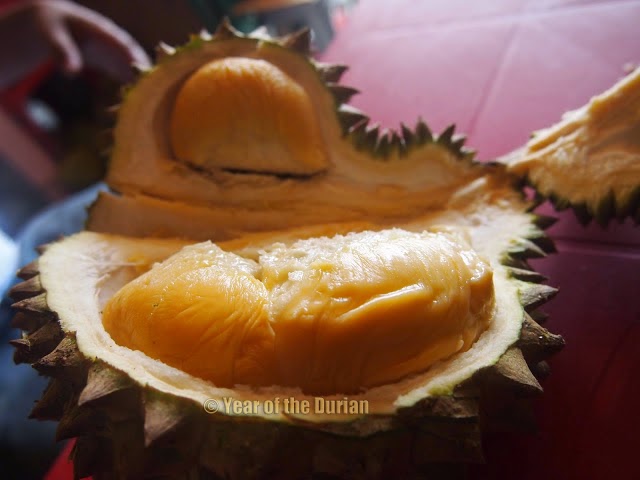 Puyat - Puyat is a Philippines durian that may soon be found in Singapore. A deliciously creamy yet mild durian with a floral coloration, Puyat was recently selected by the Singaporean Fruit and Vegetable Authority as the Filipino variety most suited to Singaporean tastes. The bonus: Philippine durian season is August through October, which will extend the availability of fresh durian in Singapore.

Marketing lessons from Durian trade
The hybrids of Durians
Posted by Under The Angsana Tree at 00:31