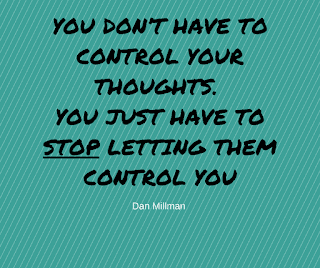 This can be very hard to do at time, but with discipline you can become as “cool” as a cucumber when the heat is on. Throughout my life being in control of my emotions, has been a battle that I have not been very successful with. As an adolescent I could not, or should I say would not control my emotions when a situation was not to my approval. I can remember punching holes in the walls and just showing my “behind” because I could not get my way.

Now, in the end my actions got me nowhere, as I had to eventually submit to whatever force was in control at the time. And frankly, this only showed my “ignorance” towards the challenges of life and the fear of not being in control. Recently, I was talking with a friend and unfortunately there are some areas in his life that are not going in his favor. The same attributes that I expressed, he would come to mimic towards his troubles.

But it was watching him, that I came to see the defeat in expressing one’s self in such a destructive way. I am in no way pointing the finger or even blaming him for his behavior, for I know that we are emotional creatures and if provoked, things can become unsettling. But what I am saying, even though we are wrapped in flesh, we do not have to give in to it. As I mentioned, we are emotional beings, so when we are confronted with hurtful situations, the natural reaction is to rebel in physical or even verbal violence.

When we can not take the needed time to dissect the situation with the use of “reason”, we allow our emotions to determine who and what we become. Now, I am not saying that a person does not have the right to become angry, for this is a human emotion that will be expressed. But when you fight against the world and cannot think straight, you lose control and are then controlled. There is always going to be a situation that will get under our skin and in the natural, our counter reactions may be justified, but if we are not willing to change then we will continue to be manipulated and mentally enslaved!!!

read more
Posted by Under The Angsana Tree at 13:05