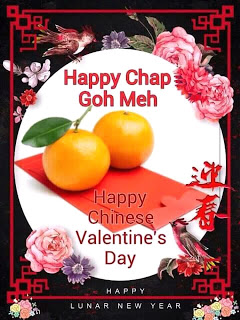 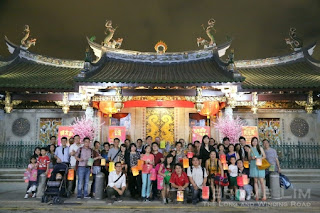 The fifteenth day of the Chinese New Year, Chap Goh Mei (Hokkien for 15th night) as it has been commonly referred to in Singapore, has traditionally been associated with romance. It was perhaps in the hope of rediscovering the romance of a festival that has been lost in the embrace of modernity that drew a healthy crowd of participants to a walk through the streets of Chinatown on the evening of the fifteenth day this year on what coincidentally was also the western day for the celebration of romance, St. Valentine’s Day that was organised by the Conservation Management Department of the Urban Redevelopment Authority (URA).

The fifteenth night of any Chinese lunar month is of course one that, weather conditions permitting, would be illuminated by the light of the full moon – a setting that certainly is ideal for romance. In the case of Chap Goh Mei, it is a night when Yuanxiao Jie (元宵节) is celebrated, providing an evening for romance to be found not only in the light of the moon, but also in the glow of colourful lanterns; it having been a tradition to have lanterns displayed outside homes and along five-foot-ways, as it was for children to take to the streets carrying lanterns in a fashion similar to the Mid-Autumn festival.

The search for romance would take many eligible young men and women to the water’s edge – the waterfront along Esplanade was, I am told, a particularly popular spot, from which fruits would be aimed into the water. For the ladies, it would be oranges, representing good husbands, that would be thrown, and for men, good wives taking the form of apples – a practice that I actually did not know about until more recent times 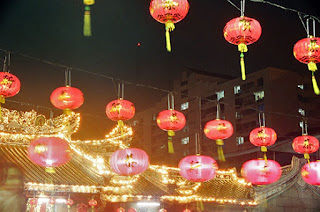 The 15th day marks the first full moon after the Spring Festival and of the New Year, also known as yuán xiāo jié meaning "first night of the full moon". The day is as well known as Lantern Festival day.

Another reunion dinner is held with lanterns and oranges being a large part of the celebrations. It is customary to eat special sweet dumplings called yuanxiao resembling the shape of the full moon. These round balls are made of glutinous rice flour stuffed with sugar fillings, symbolizing reunion.

During this festival lanterns are displayed, at times as lantern fairs, and children are carrying lanterns to temples.

The festival is associated with guiding lost and ill bred evil spirits home, while celebrating and cultivating positive relationship between people, families, nature and the higher beings as they are believed to be responsible for bringing and returning the light each year.

Another legend associates the Lantern Festival with Taoism. Tian Guan is the Taoist 'Ruler of Heaven' and the god responsible for good fortune, bestowing wealth and good luck. His birthday falls on the 15th day of the first lunar month. It is said that Tian Guan likes all types of entertainment, so followers prepare various kinds of activities during which they pray for good fortune.

Chinese kids love New Year celebrations. It is a celebration full of festive cheers, good food, and not forgetting, the many ang paus (red packets that married folks give to the unmarried ones) that come our way. It was even more wonderful that Chinese New Year last a whole good fifteen days. Usually, the celebrations would have died down considerably by the tenth day for my family; however, that is not the end to a wonderful start of a new year.

On the fifteenth day of Chinese New Year, technically the final day of the festival, is a day known as Chap Goh Mei. In the Hokkien dialect, Chap Goh Mei simply means "the 15th night of Chinese New Year". Aside from being tagged as the last day, Chap Goh Mei is also known as the Chinese Valentine's Day. On a celebratory point of view, this night sees the gathering of family members as they sit down to a meal together. Offerings and prayers are also held on a grand scale on this particular night.

Just like Chinese New Year, Chap Goh Mei is celebrated with lots of fireworks and firecrackers. This much is true for countries that allow the use of these celebratory items. You will also see many homes gaily decorated with red lanterns and bright lights to mark the end of an auspicious occasion. In temples, thanksgivings are held while many people would be asking for the God of Prosperity to endow them with success and wealth for the coming year.

Chap Goh Meh in Teochew simply means "the 15th night of Chinese New Year". Aside from being tagged as the last day of the festival, Chap Goh Meh is also known as the Chinese Valentine's Day. On a celebratory point of view, this night sees the gathering of family members as they sit down to a meal together.

Just like Chinese New Year, Chap Goh Meh used to be celebrated with lots of fireworks and firecrackers which are now banned from use. Many homes gaily decorated with red lanterns and bright lights to mark the end of an auspicious occasion. Thanksgivings are held while many people would pray for success and wealth for the coming year.

Chap Goh Meh is also regarded as the Chinese Valentine's Day, bringing forth lots of fun and gaiety. Chap Goh Meh used to be a night of courtship and was a forerunner in promoting match-making. On this night, many young ladies would make their way to the Esplanade, dressed in their best, with hope of finding prospective suitors.

These are Memories of "The Good Old Days".

Chinese New Year starts with the New moon on the first day of the first lunar month and ends on the Full moon 15 days later:

Posted by Under The Angsana Tree at 00:18