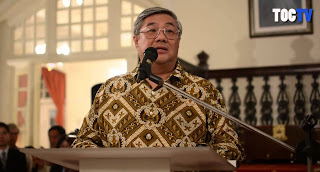 Former Attorney-General Walter Woon wrote an article, which was published in ST today ('Punishing corporate corruption', 30 Apr), criticising the government for not prosecuting the Keppel management involved in the 1995 bribery case.

In June 1995, Keppel was cited in a UK probe into a bribery scandal involving an Exxon subsidiary's employee. The person, Cornelius Van der Horst, who handled ship repair contracts at Exxon's subsidiary, was charged with accepting bribes from Keppel Shipyard. As a result, on Singapore's end, then Home Affairs Minister Wong Kan Seng announced that CPIB had also initiated investigation into the case. The case was finally brought up in Singapore court in Dec 1997.

In court, it was revealed that Keppel's marketing manager Chan Lim Hong and its Senior General Manager, Kung Yew Hock, had entertained Van der Horst at Club Kabuki in Orchard Road. Kung reportedly told Van der Horst, "If that side (Keppel's competitor) takes care of you, we can also take care of you."

On Aug 3, 2016, a news wire report alleged that Keppel Corporation was involved in a bribery scandal in Brazil. However, the company strongly refuted those allegations and this denial was also widely reported in the news media.

Keppel Corp even made a regulatory filing to the Singapore Exchange (SGX) on that Wednesday Aug 3 evening in response to the news wire report. In its filing, it said: “Keppel strongly denies the allegations reportedly made that Keppel executives authorised Mr Skornicki to pay bribes on its behalf.”

Even earlier than that in 2015, Keppel Corp’s name cropped up in reports on the “Operation Car Wash” probe, when investigations uncovered a claim that executives from Brazil’s state-owned oil company Petrobras took bribes in exchange for awarding contracts. To my knowledge, Keppel Corp did not make any public statements denying or admitting those allegations. 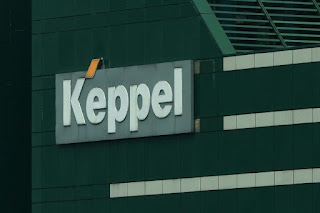 Keppel Corporation sank into the red, with a net loss of S$495.8 million for the 3 months to Dec 31 last year. FOTO: AFP

THE one-off financial penalty and related costs arising from the global resolution of the Keppel Offshore & Marine (Keppel O&M) corruption scandal in Brazil has pushed the larger Keppel group into its first quarterly loss since 2003 when it first started quarterly reporting of its results.

Keppel Corporation sank into the red, with a net loss of S$495.8 million for the 3 months to Dec 31 last year. It was a significant reversal from a net profit of S$143.1 million in the corresponding period a year earlier.

The plunge was largely the result of a S$619 million charge relating to Keppel O&M's cross-border settlement with criminal authorities in the United States, Brazil & Singapore over corrupt payments made by a former agent in Brazil.

Penalty costs from its bribery case pushed earnings down the drain.

According to its financial results, profits fell mainly because of the costs of its one-off penalty from Keppel O&M's bribery case across the US, Brazil, and Singapore, which reached a total of $619m.

Keppel Corp CEO Loh Chin Hua on Thursday (Jan 25) called the misdeeds of its offshore & marine unit in Brazil "a painful chapter" for the company and said that compliance controls have been put in place to prevent a repeat of such incidents.

Mr Loh's comments came as the conglomerate posted a 72% fall in net profit for its financial year in 2017, due mainly to penalties its subsidiary Keppel Offshore & Marine were slapped with as a result of its bribery scandal in Brazil. 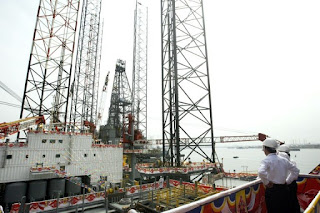 Singapore's Keppel, the world's biggest oil rig builder, vowed Thursday to put a "painful chapter" behind it as the company revealed a huge fall in profits due to a bribery scandal.

US authorities announced in December that Keppel's American subsidiary had agreed to pay $422 million in fines to settle bribery cases.

The multi-million dollar kickbacks were paid to Brazilian government officials between 2001 and 2014 in relation to various projects with state-owned oil giant Petrobras and Sete Brasil, a supplier of oil rigs. 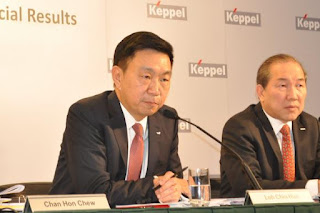 The graft case cost Keppel 619 million Singapore dollars ($473 million) in penalties and related expenses for the October-December quarter. This led to a net loss of S$495 million for the period, the first such loss since Keppel began quarterly reporting in 2003, the company told reporters Thursday. The conglomerate recorded net profit of S$143 million in the year-ago period. 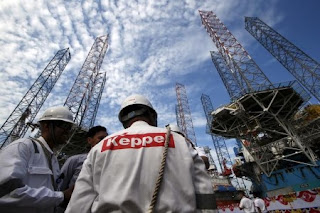 Singaporean conglomerate Keppel Corp swung to its first quarterly net loss in 14 years, after accounting for a huge fine its rig-building unit agreed to pay to resolve investigations into charges it bribed Brazilian officials.

Keppel, last month, said its offshore rig-building business had agreed to pay more than $422 million to resolve the bribery probe brought against it by authorities in the United States, Brazil and Singapore. Investigations with respect to the individuals involved are ongoing.

The company, whose businesses range from rig-building to property development, reported a net loss of S$495 million for the fourth quarter ended December, compared with a net profit of S$143 million in the year-ago period.

Singapore conglomerate Keppel Corp. (BN4.SG) posted its first-ever quarterly net loss after its marine arm paid a penalty to settle a criminal investigation into its operations in Brazil.

In December, Keppel agreed to pay US$422 million to resolve a bribery probe in multiple countries related to its operations in Brazil. The earnings report included a 618.7 million Singapore dollars (US$473.4 million) one-off financial penalty and related legal, accounting and forensics costs, Keppel said.

Keppel, one of the world's biggest rig builders, entered into a deferred prosecution agreement with U.S. authorities charging the firm with conspiracy to violate the Foreign Corrupt Practices Act, which bars the use of bribes to foreign officials to get or keep business. It also reached related settlements with Brazilian and Singaporean authorities, U.S. prosecutors said at the time.

The quarterly loss is the first recorded by the Singapore conglomerate since it began quarterly reporting in 2003 with penalties and related costs resulting a SGD619m one-off hit to Keppel's financial results.

The fines were the result of global resolution with the authorities in Brazil, the US and Singapore, relating the period 2001 and 2014 when Keppel paid approximately $55m in bribes to officials from Petrobras and the then governing party of Brazil in order to win 13 contracts with Petrobras and another Brazilian entity, Sete Brasil.

Keppel Corporation Limited reported a net profit of S$217 million for the 12 months ended 31 December 2017. This was 72% lower than the S$784 million net profit for FY 2016, due mainly to the one-off financial penalty arising from Keppel Offshore & Marine (O&M)'s global resolution with criminal authorities in the US, Brazil, and Singapore, and related legal, accounting, and forensics costs amounting to S$619 million.

Excluding the one-off financial penalty and related costs, the group would have turned in a net profit S$836 million for FY 2017, 7% higher compared to S$784 million a year ago.

On a quarterly basis, the group registered a net loss of S$495 million in Q4 2017, compared to a net profit of S$143 million for Q4 2016. The net loss mainly arose from the one-off financial penalty and related costs as well as the weaker operating results of the Offshore & Marine Division, which were partially offset by higher profits from Singapore property trading, as well as fair value gains from assets recognised during the quarter.

Revenue declined 12 percent to about S$6 billion, the company said in a regulatory filing on Thursday. 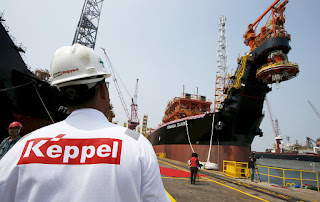 Keppel Corp, whose offshore and marine unit is embroiled in an international bribery scandal, has posted a net loss of S$495 million in the 4th quarter of last year — largely due to the financial penalty paid to the authorities — dragging its full-year net profit down by 72% compared to the previous year.

Keppel Corp shoved into the red by $619m graft penalty 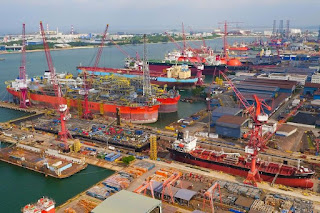 Keppel Shipyard in Singapore. Keppel said the weaker quarterly showing was also due to poorer operating results from its offshore& marine division, although partially offset by higher profits from Singapore property trading as well as fair value gains from assets. FOTO: KEPPEL CORP

Keppel said in its announcement on Thursday that the weaker quarterly showing was also due to poorer operating results from its offshore & marine division, although this was partially offset by higher profits from Singapore property trading and fair-value gains from assets.

Revenue dropped 20.4% to S$1.54 billion, as turnover fell across all divisions, except infrastructure.

Keppel Offshore & Marine in December agreed to pay $422 million to resolve investigations into the matter by authorities in the United States, Brazil and Singapore.

But Singapore’s Attorney-General’s Chambers (AGC) and the Corrupt Practices Investigation Bureau (CPIB) said at the time that investigations regarding the individuals involved were ongoing.

Keppel units paid about $55 million to win 13 contracts with Petrobras and another company, U.S. prosecutors said in a press release after an American subsidiary pleaded guilty in federal court in Brooklyn, New York. The payments were part of outsize commissions to an intermediary and disguised as consulting agreements, according to prosecutors.

“The defendants used the global financial system –- including the United States banking system –- to disguise the source and disbursement of the bribe payments by passing funds through a series of shell companies," Bridget Rohde, acting U.S. Attorney in Brooklyn, said in a statement. 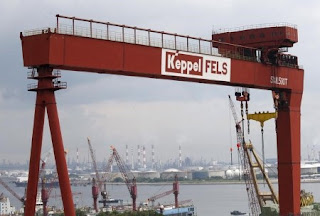 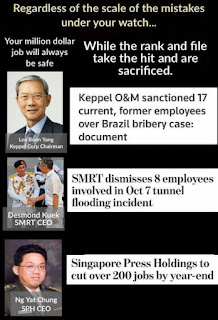