Another photo of upside down Singapore flags has been circulating online in the run-up to National Day 2017. This time, an entire row of flags are hoisted upside down outside Aqua-Nautics Pte Ltd in Sembawang.

The blunder comes two weeks after a photo showing foreign workers planting an upside down flag went viral. The workers were likely employed by the Executive Committee organising the National Day Parade this year.

The display of the Singapore Flag is subject to about 40 rules, according to Singapore Statutes. Rules state that the Singapore flag must only be displayed upside down only as a sign of distress. Since it is a reflection of the nation’s ideals, beliefs and values, it is to be be treated with dignity and honour at all times.

An Epidemic Of Upside-Down Flags?

The Singapore flag is should be displayed upside down only as a sign of distress. As it is a reflection of our nation’s ideals, beliefs and values, it should be treated with dignity and honour at all times.

We know the 38 Oxley Road saga has caused dismay to many Singaporeans, but surely it isn’t enough for anyone to claim that Singapore is in distress?

Understandably, netizens weren’t too pleased upon seeing the photo. 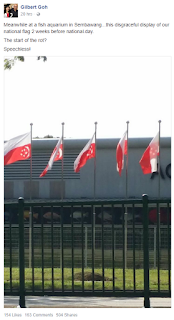 Meanwhile at a fish aquarium in Sembawang...this disgraceful display of our national flag 2 weeks before national.day.

The start of the rot? 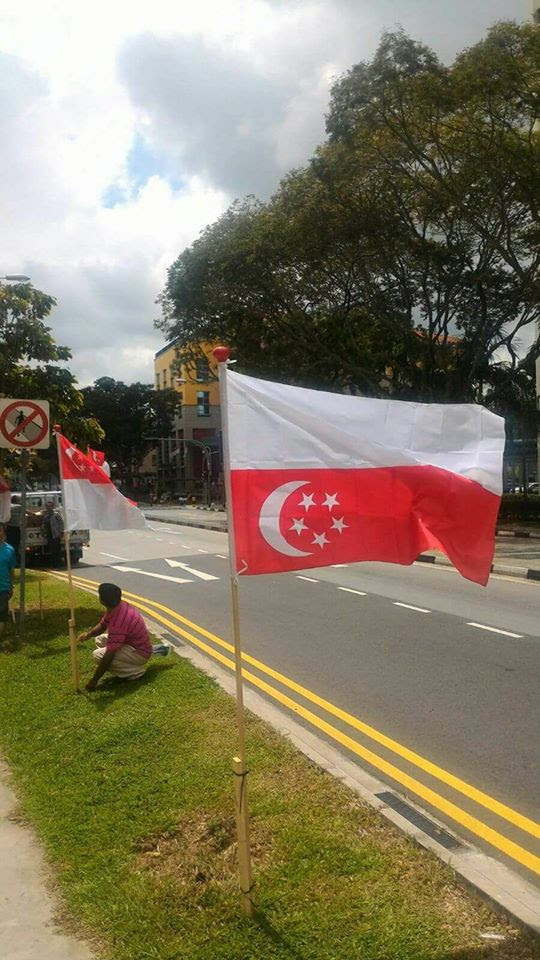 A photo showing an upside-down Singapore flag has been trending online. The flag and other flags around it appear to be installed by migrant workers who are likely employed by contractors working with the National Day Parade executive committee.

The display of the Singapore Flag is subject to about 40 rules, according to Singapore Statutes.

The NDP 2017 Executive Committee made headlines earlier this month for allegedly butchering the Tamil translation of this year’s parade slogan, One Nation Together.

Some people get angry over direction of S’pore flag at Changi Airport, don’t seem to get concept of wind

So there is this statue over at Changi Airport

However, this rather innocuous design attracted the ire of some netizens, and Facebook pages.

And the outrage was reflected by certain parts of the Internet.

The most common complaint seemed to be how the flag was backwards, which they assumed was some sort of analogy for the direction Singapore was going in. Netizens have been circulating the photo above, suggesting that the installation at Changi Airport features a flag that’s flying backwards instead of forwards.

Many have commented that this is a fail on the part of the airport and the photo has been carried on several Facebook pages and a few local news websites.

However, the fact is that the flag is deliberately blowing backwards in this installation, which is a replica of the NS Landmark located at the Singapore Armed Forces’ Basic Military Training Centre (BMTC). 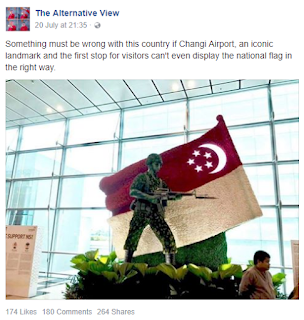 Something must be wrong with this country if Changi Airport, an iconic landmark and the first stop for visitors can't even display the national flag in the right way.

USE AND DISPLAY OF FLAG

(a) the Flag shall be hung against a vertical wall or other vertical flat surface; and

(b) the crescent and stars shall be on the top left position as seen by any spectator facing the Flag and the wall or surface, as the case may be.

For hundreds of years inverted national flags were commonly used as distress signals.

However, for some countries’ flags it is difficult (e.g., Spain, South Korea, the UK) or impossible (e.g., Japan, Thailand, Israel and Denmark) to determine whether they are inverted. Other countries have flags that are inverses of each other; for example, the Polish flag is white on the top half and red on the bottom, while Indonesia's and Monaco's flags are the opposite—i.e., top half red, bottom half white. A ship flying no flags may also be understood to be in distress.

If any flag is available, distress may be indicated by tying a knot in it and then flying it upside-down, making it into a wheft.

Why is everything breaking down in Singapore? 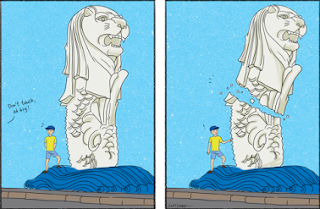 WHAT in the world is happening to my country? Not a week passes without something that busts, bursts, cracks or crashes. And that’s just using the first few words I could find in the Thesaurus to go with “break”. I have the not-altogether-incorrect impression that Singapore is breaking down, breaking up and breaking apart at the seams. The litany of woes is not about to take a break any time soon. Things fall apart; the centre cannot hold.

Again, I ask: What in the world is happening to my country? I have a theory. You may not agree with me but, if you indulge an old man his thoughts, hear me out. It has to do with a fishball stick. Not just any ordinary fishball stick but one with an extraordinary historical significance because it was mentioned by Prime Minister Lee Hsien Loong during his National Day Rally in 2014. 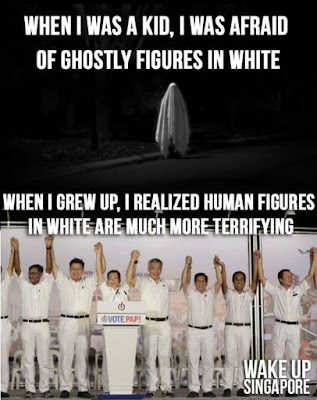 related:
Singapore PM Stirs Flap in Cambodia by Bringing up Vietnam’s 1979 Invasion
Vietnamese “Hang Flower” Girl Calls Hometown Kakis to Beat Up Korean Rival
What is happening in ‘Clean’ Singapore?
A 'Sign of Distress' in Singapore?
Why is everything breaking down in Singapore?
SG Buildings Crumbling Down Parody
Singapore’s Story: What comes next
To Singapore, with Love 星国恋
Singapore PM draws laughs in US speech
PM Lee Hsien Loong at G20 Leaders' Summit in Hamburg
Singapore must ‘steal other people’s lunches’
PM Lee In The Limelight
PM Lee in Focus
PM Lee the Latest “Victim” of Donald Trump Handshake