Singapore’s Story: What comes next 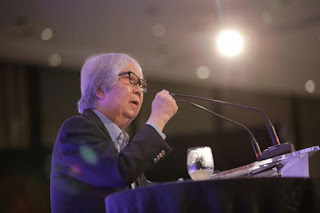 Veteran diplomat Tommy Koh laments that Singapore is a First World country with Third World people. Many Singaporeans lack the civic-mindedness that citizens of an advanced country should have, he said on Tuesday (Oct 1).

"I am more critical of Singaporeans than of the Government. Many of our people don't give a damn for the environment when they should. Many of our people are selfish and unkind. Just look at the way they drive," Prof Koh said, drawing laughter from his audience.

He was speaking at the Singapore Bicentennial Conference, organised by the Institute of Policy Studies. It was held at Raffles City Convention Centre and ended on Tuesday. 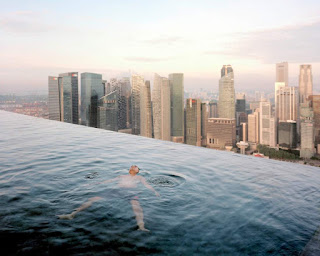 A man floats in the infinity pool on the 57th floor of the Marina Bay Sands Hotel, overlooking Singapore’s financial district

Clouds bruised the Singapore sky on Aug. 9, 1965, as Prime Minister Lee Kuan Yew confirmed that the tiny island at the tip of peninsular Southeast Asia was becoming independent. There were few notes of celebration. Singapore had been cast off, expelled from Malaysia, itself a new nation.

Lee, who would continue to dominate Singaporean politics for decades, wept in what he called his “moment of anguish” at the creation of a nation that never aspired to nationhood. 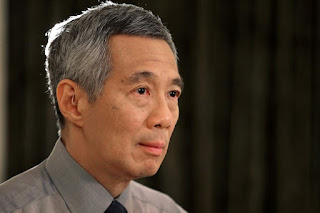 Prime Minister Lee Hsien Loong addresses the nation about the passing of his father, Singapore's founder Lee Kuan Yew, during a live broadcast on Monday, March 23, 2015, in Singapore

As Singapore gears up to celebrate the 50th anniversary of its independence, the city-state once dismissed as a “little red dot” at the midpoint of regional maps now serves as the epicenter of Asian-style development. By combining Confucian values with state-sponsored capitalism, Singapore in little more than a generation moved “from third world to first,” as a memoir of founding father Lee Kuan Yew puts it.

In truth, Singapore — a mix of majority Chinese and smaller Malay and Indian communities — wasn’t quite as backward upon independence as its boosters claim. The city-state’s economic development was unmatched by individual political liberties. The nanny state admirably 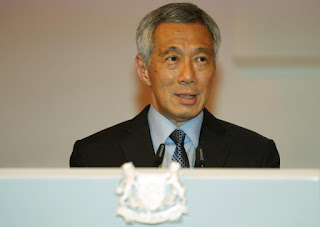 Prime Minister Lee Hsien Loong was asked by TIME magazine whether a non-Chinese could be the country's PM, and whether Singapore's development experience could be emulated by others.

Here are edited extracts of the exchange
read more 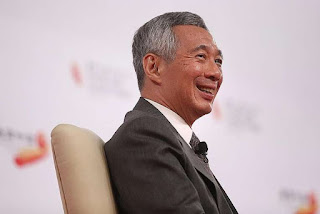 Prime Minister Lee Hsien Loong at a forum earlier this week. Singapore needs to get its economy to the next level as other Asian countries snap at its heels. "If we don't, then we will have malaise and the angst, and even disillusionment, which you see in many developed countries," he said in an interview with Time magazine.ST PHOTO: KEVIN LIM

There was a tremendous outpouring of grief when Mr Lee died in March this year, but confidence in Singapore was not shaken.

On the contrary, it was strengthened, PM Lee noted in an interview with Time magazine, a transcript of which was released to Singapore media yesterday.

Enhancing the economy, the ageing population and maintaining a national identity are the three biggest challenges that Singapore faces over the next half-century, Prime Minister Lee Hsien Loong said.

The immediate challenge over the next decade is getting the economy to the next level, he said in an interview published by Time magazine on Thursday (Jul 23).

"We are looking for a path which no country has yet found and we are not even an economy like the Japanese or Germans, or never mind the big power economy. So to get to the next level is a big challenge, if we don't get to the next level then we will have malaise and the angst, and even disillusionment which you see in many developed countries," he said.

Singapore: Prime Minister Lee Hsien Loong has warned that Singapore, with over 1.3 million foreign workers, may end up in a "tight spot" like Japan if it fails to strike the right balance between birthrate and immigration policies.

As of now Singapore's demographics may not have become a major issue -- but it will be in a generation's time, on a 25-year timeframe.

The immediate challenge over the next decade is getting the economy to the next level, Lee said in an interview published today by Time magazine.
read more

S’pore has only 25-year window to get demographic balance right, PM warns 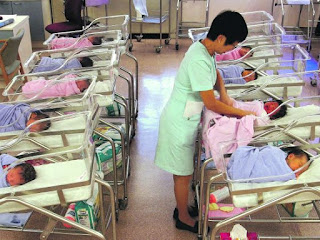 The Republic has a 25-year window to raise birth rates and maintain a balance between the proportion of foreigners and Singaporeans. Otherwise, it could be in a “very tight spot” like Japan, Prime Minister Lee Hsien Loong warned in a wide-ranging interview with Time magazine, which was conducted on July 10 and published today (July 23).

Reiterating the size of the demographic and existential challenges for Singapore in the medium and long term, Mr Lee also flagged the dangers of a brain drain and schisms within the population.

“In 25 years, if we can’t get our demography balance between our births and immigration of foreign workers, we will be in a very tight spot like the Japanese are,” he said. 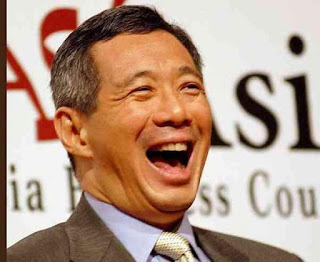 In an interview with Time Magazine released on Thursday, Prime Minister Lee Hsien Loong gave his views on a variety of topics, including the need to balance the population of more than 1.3 million foreign workers, which make up a quarter of Singapore’s population, while forging a national identity with a Singaporean "core".

According to Lee: “If you don’t have that Singapore core, you can top up the numbers, but you are no longer Singapore. It doesn’t feel Singapore, it isn’t Singapore and we can issue everybody red passports, but where is the continuity?”

He says the Government has taken steps to slow the intake of foreigners in recent years, but faced with a rapidly ageing population, “the solution we have to be able to work, is to have enough of our own children for the next generation.” 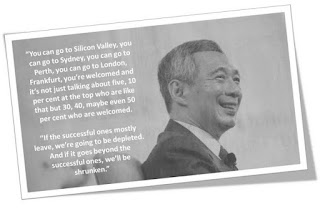 Prime Minister Lee Hsien Loong has once again raised a perennial problem faced by Singapore – those who have chosen to leave the country for good.

In an interview with TIME magazine which was published on Thursday, Mr Lee said:

The late elder Lee revealed in an interview with United Press International then that Singapore was facing a ‘pretty serious’ brain drain problem.

The (re)birth of a nation?

I remember Sunday, 29 March, 2015 very well. That’s because I stood in the rain for almost three hours at Commonwealth MRT station, waiting to catch some footage of the late Lee Kuan Yew’s funeral cortege.

As the hours passed and the showers turned into a deluge, the crowd around me, both young and old, steadily built up. Packed against the barricades, dozens of pairs of eyes were glued to smartphones to monitor the progress of the cortege. Some offered the shelter of their umbrellas to strangers.

And though many of us got drenched, and Singaporeans are champion grumblers, I didn’t hear a single word of complaint. Everyone simply wanted to catch one last glimpse of the man.

Lee Hsien Loong: I am very sad the Workers’ Party only know how to criticise snidely 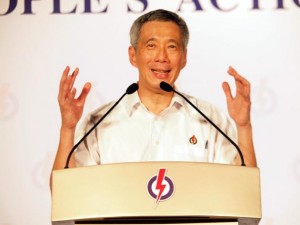 In today’s (July 23) release of the transcript of his interview with US-based TIME Magazine, PM Lee Hsien Loong said that he “welcome” criticisms especially when they are raised in Parliament. However, he is very sad that the Opposition Workers’ Party’s criticism “comes snidely and round the corner”:

“…the problem is criticism comes snidely and round the corner…"


When we face the critics across the aisle in (Parliament) with the television cameras on, their criticism withers. It’s very sad.” 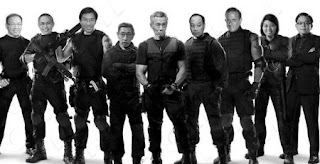 The call by a former prime minister for ending one of Lee Kuan Yew’s cornerstone tenets for governing Singapore when he is still alive has got some questions flying.

Goh Chok Tong, who succeeded Lee in 1990, said Singapore needs to forge a new social compact between people and government to replace the old one to avoid a “mid-life crisis”.

In a constituency speech marking the island republic’s 48th National Day, Goh, long believed to be part of the ruling party’s softer faction, spoke of the need to write a new chapter of the Singapore Story. The reason, he said, is that both the external environment and Singaporeans at home have changed.

Poor in the Land of Crazy Rich Asians

An old woman with a cart sits in front of a Buddhist temple Chinatown, Singapore. Mapa Melvin / Shutterstock.com

Park Royal Hotel along Pickering Street in Singapore is nothing short of spectacular. Lush greenery lines the undulating planes of its facade, mimicking the vibrant green of paddy fields that are common sights in the country’s Southeast Asian neighbours. The building has won numerous architectural and design accolades, and been featured as a location in the Hollywood film Hitman: Agent 47.

But walk a few paces past this impressive glass facade, deeper into the heart of Chinatown, and the surroundings start looking a little different.

Pieces of paper are strewn carelessly on the ground; there’s a seemingly impenetrable layer of grime. Here, the buildings are older, tinted yellow from long exposure to the elements. Come nightfall, men and women, carrying their possessions in backpacks or plastic bags, will discreetly unfurl blankets and newspapers on street corners or stone benches to get some rest for the night.


related:
Why is everything breaking down in Singapore???
Singapore PM Stirs Flap in Cambodia by Bringing up Vietnam’s 1979 Invasion
Vietnamese “Hang Flower” Girl Calls Hometown Kakis to Beat Up Korean Rival
What is happening in ‘Clean’ Singapore?
A 'Sign of Distress' in Singapore?
Why is everything breaking down in Singapore?
SG Buildings Crumbling Down Parody
Singapore’s Story: What comes next
To Singapore, with Love 星国恋
Singapore PM draws laughs in US speech
PM Lee Hsien Loong at G20 Leaders' Summit in Hamburg
Singapore must ‘steal other people’s lunches’
PM Lee In The Limelight
PM Lee in Focus
PM Lee the Latest “Victim” of Donald Trump Handshake

PM Lee Appalled By Harassment Over Philippine Independence Day Event
Singapore Stumbles on China's Road
Lee Hsien Loong's 10 years as PM
Singapore in the 1950s to 1990s
The Surprising Truth About The Homeless In Singapore
Tent Village: Singapore’s nomad families
What is it like to be a Singaporean?
Why do people hate Singapore?
Singapore: Best Place to Live and Work
Plight Of The Tissue Peddlers
Have you ever Spoken to a Cardboard Uncle or Aunty?
Singapore’s Story: What comes next
Singapore at 50: From swamp to skyscrapers
Singapore Good Old Times
The Poor & Homeless in Singapore
Support for the Needy and Elderly
The Singapore Story
Other Side of The Singapore Story
ChasingThe Singapore Dream
To Be Or Not To Be Singaporeans
Longing for the good old days
Singapore: A Sampan or a Cruise ship?
Singapore at 50: From swamp to skyscrapers
Singapore is ‘World’s Costliest City To Live In’
Coping with Inflation & Cost Of Living
COL goes Up, Up, Up!
Singapore “Swiss” Standard of Living
Tackling poverty the 'kuih lapis' way
Callings for a Poverty Line
Setting a poverty line may not be helpful
A minimum wage for Singapore?
No homeless,destitute starving people in S'pore:Poverty has been eradicated
Growing Up With Less
Posted by Under The Angsana Tree at 00:13