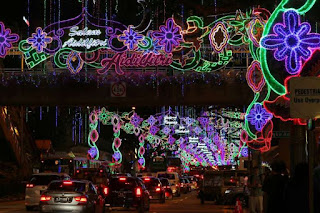 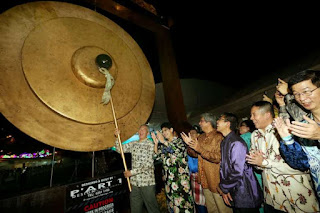 Geylang Serai came alive in a dazzling display of lights and colour as the annual Hari Raya light-up there was launched on Sat (Jun 4) night.

Despite a slight drizzle, 1,000 residents gathered on the field at Engku Aman Road to join in the festivities as Prime Minister Lee Hsien Loong launched the event marking the start of Ramadan, the Muslim holy month of fasting and prayer which begins on Monday.

This year, the 2.8km stretch of lights and decorations features traditional and modern batik designs, and weave patterns of Malay crafts.

The lessons from Ramadan 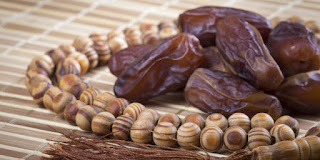 A new moon heralds the start of the holy month of Ramadan, which brings along its characteristic festivities. For Muslims all around the world, Ramadan—the month of fasting—brings a distinctive sense of togetherness, a respite from the busy day-to-day life, and a definite means of catharsis. Ramadan is most prominently known for restricting Muslims from eating or drinking anything from Fajr—the prayer that marks the dawn—till Maghrib, the prayer that marks the dusk.

However, what strikes me the most is that the month works in a very counter-intuitive manner. One would think that not drinking or eating anything the whole day would cause frustration, agitation, and short-temperedness amongst the observers. Yet, in reality, the month is widely seen to instigate a sense of patience, empathy and tolerance amongst its observers.

As president Obama duly noted in his recent statement about Ramadan, the month is unarguably a time for veracious brooding, introspection, and reflection—reflection upon one’s actions, morals, and codes of conduct—and most importantly appreciation of and gratitude towards all that we have that others in need do not.

related: The Beauty Of An Arab American Ramadan

Muslims in Singapore to mark start of Ramadan on Jun 6 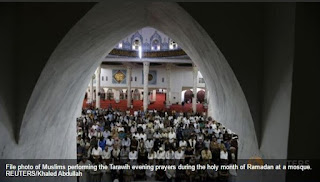 Muslims in Singapore will usher in the holy month of Ramadan on Monday (Jun 6), kicking off a month of fasting during daylight hours and prayers with fellow believers around the world.

Announcing the date, the Islamic Religious Council of Singapore (MUIS) noted that according to astronomical calculations as agreed upon by member countries of The Informal Meeting of the Religious Affairs Ministers of Brunei Darussalam, Indonesia, Malaysia and Singapore, the crescent moon for the month of Ramadan appeared on Sunday evening after sunset for about 18 minutes.

“I would like to take this opportunity to wish every Muslim in Singapore a blessed Ramadan,” the Mufti of Singapore, Dr Mohamed Fatris Bakaram said in a statement on Sunday.

Ramadan is the ninth month* of the Muslim calendar. It is during this month that Muslims fast. It is called the Fast of Ramadan and lasts the entire month. Ramadan is a time when Muslims concentrate on their faith and spend less time on the concerns of their everyday lives. It is a time of worship and contemplation.

During the Fast of Ramadan strict restraints are placed on the daily lives of Muslims. They are not allowed to eat or drink during the daylight hours. Smoking and sexual relations are also forbidden during fasting. At the end of each day the fast is broken with prayer and a meal called the iftar. In the evening following the iftar it is customary for Muslims to go out visiting family and friends. The fast is resumed the next morning. During Ramadan, it is common for Muslims to go to the Masjid (Mosque) and spend several hours praying and studying the Quran. In addition to the five daily prayers, during Ramadan Muslims recite a special prayer called the Taraweeh prayer (Night Prayer). The length of this prayer is usually 2-3 times as long as the daily prayers. Some Muslims spend the entire night in prayer.

The holiday of Eid ul-Fitr marks the end of Ramadan and the start of the next lunar month, Shawwal. This day is declared when the crescent new moon has been sighted or if sighting of the moon is not possible due to the weather, the completion of 30 days of fasting. 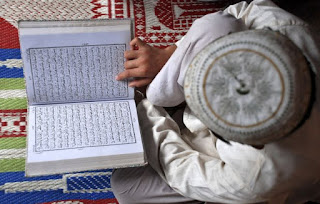 Muslims around the world will be observing Ramadan, the first day of the Islamic holy month by the same name, this week. It will begin depending on the sighting of the new moon.

Throughout the next 30 days, Muslims around the world observe fast, pray from dawn to dusk, and abstain from smoking and sex. They break their fast after sunset by having dates, which is known as "Iftaar".

Muslims observe the month of Ramadan, which marks the anniversary of the Quran being revealed to Prophet Mohammed. The observance is regarded as one of the Five Pillars of Islam along with belief, worship, charitable donations and the pilgrimage to Mecca. Ramadan concludes with Eid ul-Fitr, when morning prayers are followed by feasting and celebrations.

read more
Posted by Under The Angsana Tree at 06:06