The World Health Organization says the death toll in the Ebola outbreak in West Africa has passed 1,000

The U.N. health agency said in a news release on Monday that 1,013 people have died in the outbreak, which has hit Guinea, Liberia, Sierra Leone and possibly Nigeria.

Authorities have recorded 1,848 suspected, probable or confirmed cases of the disease, which causes a high fever, vomiting and bleeding. The outbreak was first identified in March in Guinea, but it likely started months earlier. 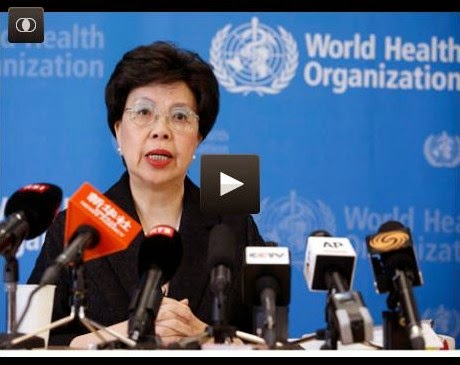 The World Health Organisation has declared the Ebola outbreak an international public health emergency, but it is not recommending general bans on travel or trade.

The global body said the Ebola outbreak – the largest and longest in history – was happening in countries without the resources to manage the infections, some with devastated healthcare systems still recovering from war, and called on the international community to help.

"Countries affected to date simply do not have the capacity to manage an outbreak of this size and complexity on their own," said Margaret Chan, the WHO's director general. "I urge the international community to provide this support on the most urgent basis possible."

Was a two-year-old boy from a tiny village in Guinea the 'patient zero' of the Ebola outbreak? 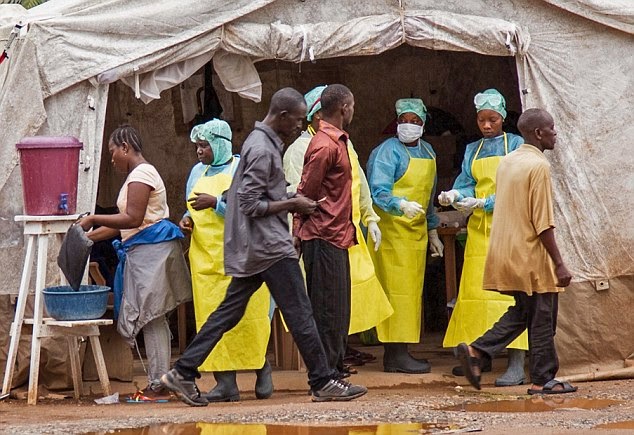 Health workers screen people for Ebola virus before entering the Kenema Government Hospital in Kenema, 186 miles from Freetown, the capital of Sierra Leone, one of the three countries at the centre of the outbreak

A two-year-old boy from a remote village in Guinea was 'patient zero' in the deadliest-yet Ebola outbreak, epidemiologists believe.

The boy from the village of Meliandou, Guéckédou province, suffered with fever, black stools and vomiting for just four days until he died on December 6.

Seven days later, his mother died too, followed by his three-year-old sister, who fell sick on Christmas Day and was dead before she could see the New Year.

related:
Ebola in Canada? Patient returning from virus-stricken West Africa is being tested
American doctor with Ebola breaks his silence as he says he is getting stronger
Ebola's spread is 'unprecedented' says CDC chief as he warns deadly disease

The day Ebola was almost released on U.S. soil 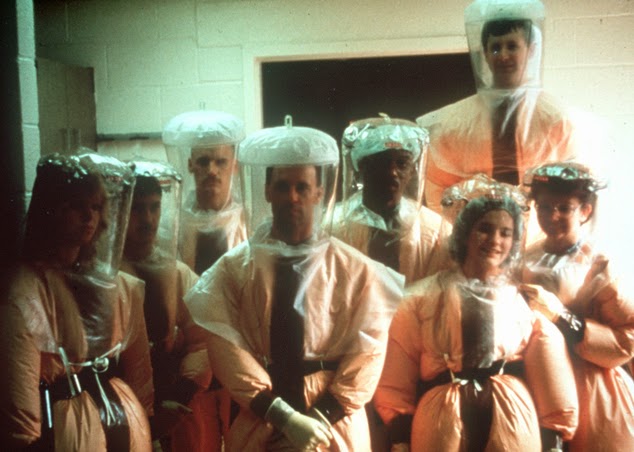 It had all the makings of a public-health horror story: an outbreak of a wildly deadly virus on the doorstep of the nation's capital, with dozens of lab monkeys dead, multiple people testing positive, and no precedent in this country on how to contain it.

Americans' introduction to the Ebola virus came 25 years ago in an office park near Washington Dulles International Airport, a covert crisis that captivated the public only years later when it formed the basis of a bestselling book.

Initially thought to be the same hyper-deadly strain as the current Ebola outbreak that has killed hundreds in Africa, the previously unknown Reston variant turned out to be nonlethal to humans. But the story of what might have been illustrates how far U.S. scientists have come in their understanding of a virus whose very name strikes fear, even in a country where no one has fatally contracted it.

related:
Humanitarian aid volunteer who sent New York into Ebola scare breaks the silence
Was 2-year-old boy from a tiny village in Guinea the 'patient zero' of Ebola outbreak?

The World Health Organization, in partnership with the Ministries of Health in Guinea, Sierra Leone, Liberia, and Nigeria announced a cumulative total of 1779 suspect and confirmed cases of Ebola virus disease (EVD) and 961 deaths, as of August 6, 2014. Of the 1779 clinical cases, 1134 cases have been laboratory confirmed for Ebola virus infection.

In Guinea, 495 cases, including 367 fatal cases and 355 laboratory confirmations of EVD, were reported by the Ministry of Health of Guinea and WHO as of August 6, 2014. Active surveillance continues in Conakry, Guéckédou, Pita, Siguiri, Kourourssa, Macenta, and Nzerekore Districts.

In Sierra Leone, WHO and the Ministry of Health and Sanitation of Sierra Leone reported a cumulative total of 717 suspect and confirmed cases of EHF as of August 6, 2014. Of these 717, 631 cases have been laboratory confirmed and 298 were fatal. All districts are now reporting clinical EVD patients. Reports, investigations, and testing of suspect cases continue across the country. Aid workers and doctors transfer Miguel Pajares, a Spanish priest who was infected with the Ebola virus while working in Liberia, from a plane to an ambulance as he leaves the Torrejon de Ardoz military airbase, near Madrid, Spain

A hospital in Ontario, Canada, has isolated a patient with flu-like symptoms after the person was revealed to have recently travelled from Nigeria – one of the Ebola-hit areas.

The measure is just a precautionary one and the patient has not yet been diagnosed with the deadly disease – a virus with a mortality rate as high as 90 per cent and which has swept through west Africa killing 961.

The unnamed patient has been admitted to Brampton Civic Hospital, with a diagnosis yet to come. 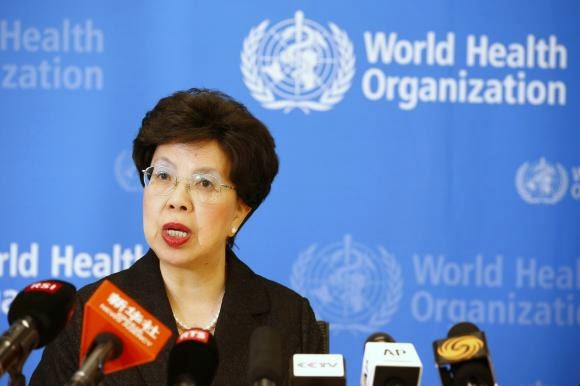 World Health Organization (WHO) Director-General Margaret Chan addresses the media after a two-day meeting of its emergency committee on Ebola, in Geneva August 8, 2014

West Africa's Ebola epidemic is an "extraordinary event" and now constitutes an international health risk, the World Health Organization (WHO) said on Friday.

The Geneva-based U.N. health agency said the possible consequences of a further international spread of the outbreak, which has killed almost 1,000 people in four West African countries, were "particularly serious" in view of the virulence of the virus.

"A coordinated international response is deemed essential to stop and reverse the international spread of Ebola," the WHO said in a statement after a two-day meeting of its emergency committee on Ebola.

With global anxiety rising on Ebola, medical ethicists are weighing how best to use a limited supply of experimental drugs that have shown early promise in fighting a disease that’s killed almost 1,000 people this year.

The urgency to access the treatments has increased as health officials in the U.S., Canada and Hong Kong have isolated and tested travelers with Ebola-like symptoms, before ruling out the disease. Medical experts have said they wouldn’t bet against Ebola traveling outside of West Africa.

A panel of ethicists convened by the World Health Organization today will begin weighing whether drugs that haven’t been widely tested for safety should be used in an outbreak where about 40 percent of infected people survive with just supportive care. If so, the panel members must address who gets the medicines, which so far only exist in small amounts.

Vaccine 'should be ready for 2015', WHO says, as GSK plays down timing 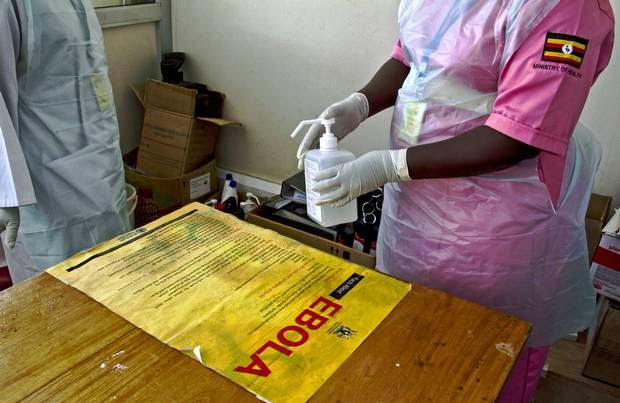 An Ebola vaccine should be ready for public use by 2015, the United Nation’s health agency has said.

There is currently no vaccine or cure for the virulent disease, which has ravaged parts of West Africa and killed more than 900 since its outbreak in March.

Vaccine Trials on Humans to Begin Soon, Could Be Marketed By 2015 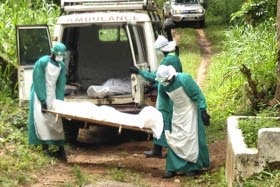 The World Health Organisation (WHO) has announced over the weekend it will already commence the clinical trials of a preventative vaccine for the Ebola virus next month. Thevaccine was made by British pharma company GlaxoSmithKline (GSK). If successful, it could be made available and marketed by 2015.

GSK's drug, co-developed with US scientists, will enter Phase I testing in humans. The only thing delaying its start is the approval from the U.S. Food and Drug Administration.

"We are targeting September for the start of clinical trials, first in the United States and certainly in African countries, since that's where we have the cases," Jean-Marie Okwo Bele, the WHO's head ofvaccines and immunisation, told French radio RFI.

Ebola virus arrived in Southeast Asia via the Philippines

The Phillipines has reported the country's first suspected cases of the Ebola virus. According to the country's health officials, seven workers who returned to the Phillipines from Sierra Leone are showing symptoms symilar to that of the tropical virus.

There are currently over 1,300 suspected cases worldwide. The World Health Organization says there is little risk of the virus spreading outside of West Africa, but countries outside of the affected region are still taking precautions to prevent a spread.

The outbreak is the biggest since Ebola first emerged in Africa nearly 40 years ago. So far, more than 700 people have died in West Africa. Link

Singapore ramps up safeguards against Ebola 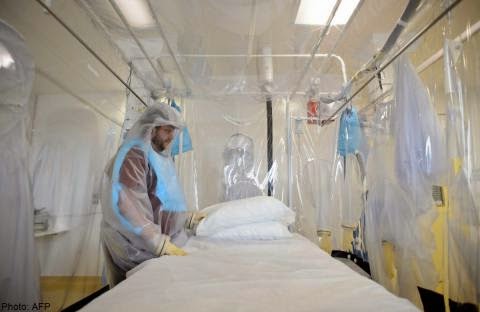 A nurse in a specialised unit for Ebola cases at the Royal Free Hospital in north London. In Singapore, the Health Ministry has maintained that the disease poses a low public health risk to the country

Singapore is taking more measures to guard against Ebola, amid the world's worst outbreak of the deadly disease.

Nationals of Guinea, Liberia, Sierra Leone and Nigeria - where most cases have occurred - will be issued individual health advisories when they come through Singapore's immigration checkpoints, said the Ministry of Health (MOH) yesterday.

The advisory says that if travellers become unwell with Ebola symptoms, such as sudden high fever, stomach pains, diarrhoea, vomiting, rash or bleeding within three weeks of being in Ebola-hit areas of West Africa, they should see a doctor early at any clinic in Singapore.

The World Health Organisation's (WHO) Emergency Committee regarding Ebola Virus Disease (EVD) has ascertained that the Ebola outbreak in West Africa constitutes a Public Health Emergency of International Concern (PHEIC).

The WHO also recommends that countries put in place measures, which includes the following:
These measures are already in place in Singapore, as part of our preparedness plan against EVD

The Ministry of Health issued an advisory on Thursday (July 31) asking the public not to be alarmed by recent reports regarding the spread of Ebola.

The Ebola outbreak in West Africa has infected about 1,200 people since the start of the year. Suspected cases in Britain and Hong Kong have since tested negative, and authorities have put precautionary measures in place.

"The Ministry of Health’s current assessment is that Ebola poses a low public health risk to Singapore since person-to-person transmission results from direct contact with bodily fluids of those infected, and there is low travel connectivity to West Africa where the current outbreak remains limited to," said an MOH spokesman 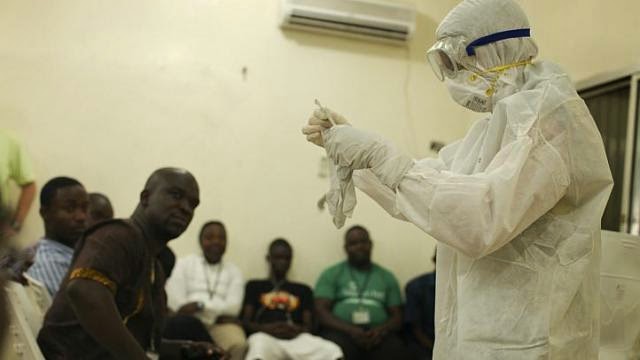 Ebola still poses a low public health risk to Singapore, and the Ministry of Health's advisory on the disease remains essentially unchanged from last week.

Last Thursday, it advised the Singapore public not to be alarmed by reports of Ebola cases overseas.
The Ministry advised Singapore residents to consider postponing travel to affected areas if it is non-essential.

What is Ebola and how do people catch it? 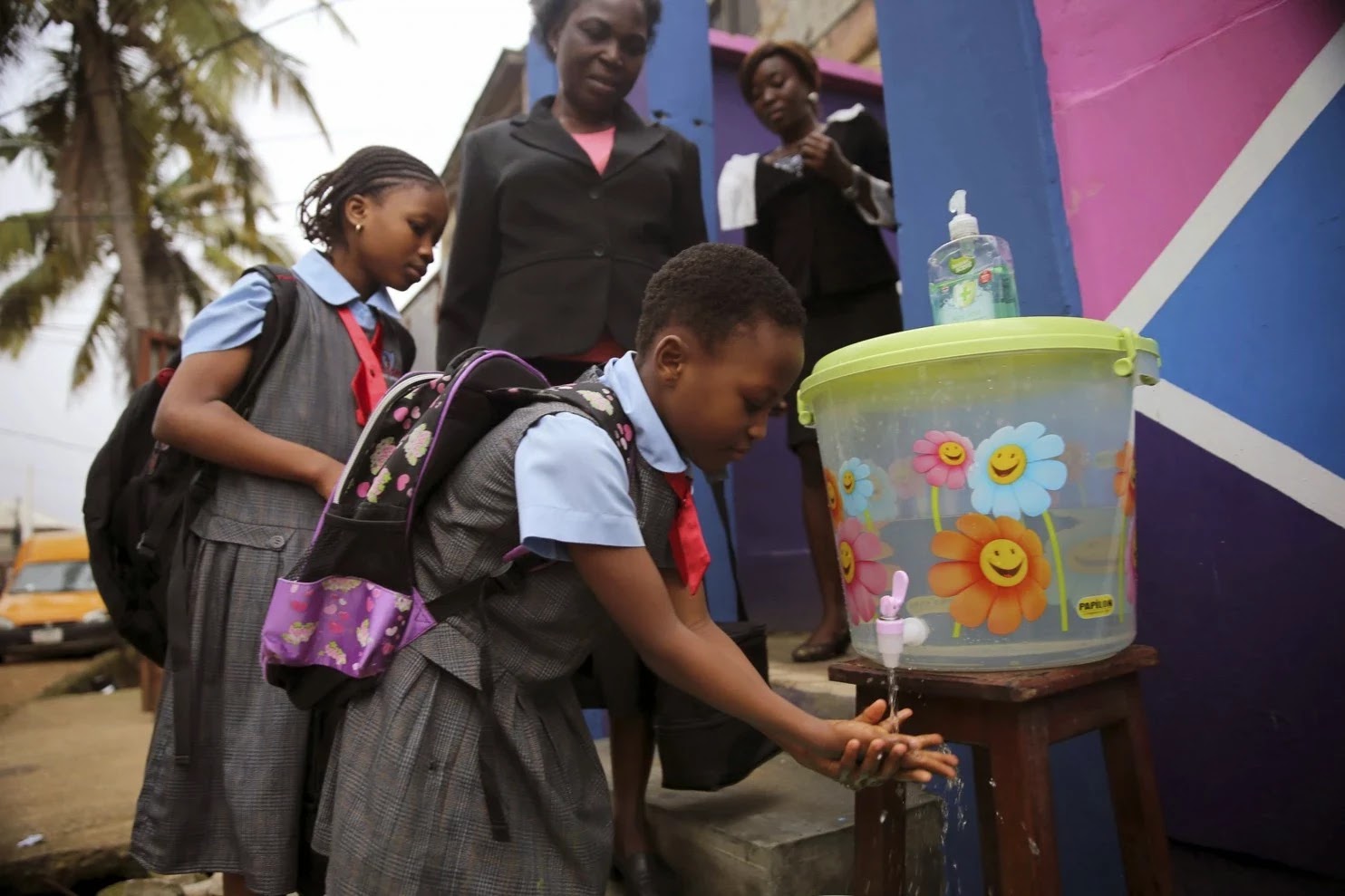 A young girl in Lagos, Nigeria, washes her hands before entering her school. Such methods can help slow the spread of the Ebola virus. (Akintunde Akinleye/Reuters)

Over the past month, you may have heard people talking about the Ebola virus. You may have also seen something about it on television, in the newspaper or on the Internet.

The reason for this is because an outbreak of Ebola started in West Africa in March. So far, the virus has infected nearly 6,000 people in Guinea, Liberia, Sierra Leone, Nigeria and Senegal.

What is Ebola? The Ebola virus was discovered in two African countries (Sudan and Congo, then known as Zaire) in 1976. The affected region in Congo was near the Ebola River, which is how the virus got its name.

Posted by Under The Angsana Tree at 00:14