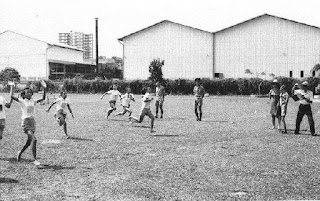 Without any maids, our mothers cooked, cleaned and took care of the whole family. They still had time to chat with neighbours.

Everyone had candy floss, fizzy drinks and shaved ice with syrups. Diabetes were rare and aspirin/panadol cured all illness.

We rode adult's bicycle to school, the richer ones had their own mini-bikes. Ironically, we all had problems with our brakes, and after running into the bushes a few times, we learned how to solve the problem.

Prefects were a fearful lot ... more fearful than the teachers. Detention class was like going to prison for a day. We had "public canning" in schools.

NO ONE ever won the big prizes on "TIKAM". It was a scam but it did not stop us from coming back for more.

Motorbikes were rode without helmets. It was rare to ride a private taxi. Taking a bus was luxury - we either cycled or walked to everywhere.

We drank water from the tap and NOT from bottles.

We spent hours in fields under the sun, playing football or flying kites, without worrying about UV rays. It did not affect us.

We roamed free, catching spiders and did not worry of Aedes mosquitoes. We kept our spiders in match boxes and ready for a fight anytime.

With mere 5 pebbles, girls played endless games; and with a tennis ball, boys ran like crazy for hours.

When it rained, we swam the drains & canals to catch "ikan keli", none of us were dissolved in rain.

We shared one bottle of soft drink with friends, NO ONE actually worried about catching anything.

We ate salty, sweet & oily foods, bread had real butter and sometimes condense milk. We enjoyed very sweet coffee, tea, and "ice kacang" but we were not obese because ...... WE WERE OUT PLAYING ALL THE TIME!!

We left home in the morning and played all day till hunger drove us back home. When needed, our parents knew how to find us. NO ONE actually watched over us and WE ALWAYS WERE SAFE.

WE DID NOT HAVE HANDPHONES BUGGING US. We rode bikes or walked over to a friend's house and just yelled for them!!

We did not have Playstations, X-boxes, Nintendo's, multiple channels on cable TV, DVD movies, no surround sound, no phones, no personal computers, no Internet. WE HAD FRIENDS and we went outside and found them!! Our TV was black and white.

We fell out of trees, got cut, broke bones and teeth and we still continued the stunts.

We did not have birthdays parties till we were 21, that is when we started to take notice of girls.

We have not heard of the word "chinese or malaysian or indian". We only knew our friends by names. Their parents were Ah Soh, Ah Pek, Pak Cik and Mak Cik or Uncle and Aunty.

In badminton, we did not change the shuttle as long as it was in flight. Regardless of how many feathers were left in the shuttle, our game continued....

Match-boxes were always "chilly" or "king kong" brand ...; to own a box of matches from a hotel was something great.

Regardless of whether we could afford one, we always knew Maths tuition was $5.00 a month.

All parties were held in the void decks downstairs or in tents.

We felt pleased to see a policeman and we were always eager to tell police everything we saw.

Morris Minor and Volkswagen Beetle were on our roads...driven alongside Kingswood, Vauxhall, Opel and Chyrsler. Executives of companies drove Peugeot 504. Japanese cars were considered "inferior". There were no traffic lights, only roundabouts.

Our favourite local performer was Rose Chan and the Beatles were the most popular band. John Wayne's westerns on Sunday Cheap Matinees were 25 cent per show.

Malay weddings had joget sessions in the night, it was the only time to ask the Malay lady for a dance.

Football was played barefooted in torn-filled "padangs", rain or shine ..., but still quah kim song and company made us proud, we actually beat malaysia team in malaysia cup!

The bayi mata instill fear and were highly regarded

Susu lembu was delivered to our house by our big, friendly and strong "Bayi" on his bicycle. All "jagas" were "Bayi" and no place got robbed.

We played "gasing", made our own kites & had kite fighting with glass glued threads and made wooden guns & used seeds from plants for bullets.

Kang Kong was free …, easily harvested by riverside. "Kembong" was 30 cents a "kati" and nobody wanted "ikan pari".

When the Circus came to town, everybody went to see it. It was the best LIVE show I ever saw.

Usually we did not have to BUY fruits; they were self planted or given by neighbours or friends.

The idea of parents bailing us out if we broke the law was unheard of. Our parents actually sided with the law! Nobody knew about child psychology!

Yet this generation has produced some of the best risk-takers, problem solvers and inventors ever!

The past 40 years have been an exploration of innovations and new ideas.

We had freedom, failure, success and responsibility, and we learned ... HOW TO DEAL WITH IT ALL!

Longing for the good old days 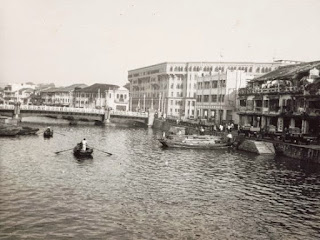 Three months ago, behind closed doors, participants at an Institute of Policy Studies (IPS) event had a discussion with members of the Government’s much-vaunted machinery to anticipate wild cards and black swans — the latter a buzz phrase among civil servants these days, referring to unpredictable and rare occurrences that nevertheless have great impact.

On the agenda were sousveillance — or the watching of the Government by the general population — and the impact of automation on jobs. But the group was also trying to dissect and make sense of another trend: A longing for the good old days.

“The sense of nostalgia among Singaporeans seems to have become more pervasive ... Singaporeans are finding new ways to build the community ties that characterised kampung life and mobilising to preserve green spaces and heritage buildings that provide a link to the past,” read the synopsis for the IPS session, organised for its corporate associates and featuring some members of the Government’s Strategic Futures Network. 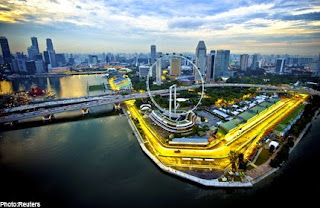 We belong to a fortunate generation that is reaping the prodigious benefits of globalisation and technology. It's so easy to move from one part of the world to another these days. And everyone's doing it.

With all my heart, I would love to take on the adventure that comes with living overseas, too. I would love the independence, the freedom, the change. To be young and reckless - yes, I'd like that very much.

Yet, in the long run, I'd still like some place to which I can return.

Singapore at 50: From swamp to skyscrapers 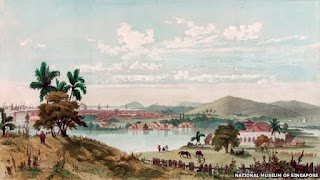 Fifty years ago Singapore became an independent state, after leaving the short-lived Malaysian Federation. With no natural resources, just how did this tiny country go from swamp to one of the region's leading economies? On the strength of its human resources - immigrants like my grandfather.

At the age of 17, with only the shirt on his back, Fauja Singh left his parents in a small Punjabi village and made the long and dusty journey on foot and by train to Kolkata (Calcutta), where he caught a ship to his new home. It was the early 1930s. He arrived in a melting pot of cultures and chaos on an island at the mouth of a river, which bustled with trade - Singapore.

Once a swamp-filled jungle, when the British arrived in 1819, under the leadership of Sir Stamford Raffles, the makings of modern Singapore began. Lying at the mid-point of the shipping route between India and China, it became a thriving trading port, and with this trade came a huge influx of immigrants from all over Asia.

Singapore’s Story: What comes next 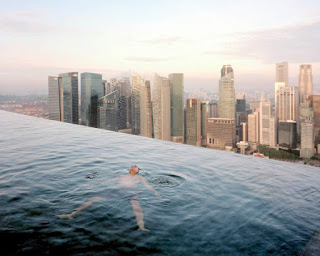 A man floats in the infinity pool on the 57th floor of the Marina Bay Sands Hotel, overlooking Singapore’s financial district

Clouds bruised the Singapore sky on Aug. 9, 1965, as Prime Minister Lee Kuan Yew confirmed that the tiny island at the tip of peninsular Southeast Asia was becoming independent. There were few notes of celebration. Singapore had been cast off, expelled from Malaysia, itself a new nation.

Lee, who would continue to dominate Singaporean politics for decades, wept in what he called his “moment of anguish” at the creation of a nation that never aspired to nationhood.

To Be Or Not To Be Singaporeans

There are several benefits of becoming a Singapore Citizen – the ease of travelling with a Singapore passport and benefits in education, health-care, housing and employment. There are certain disadvantages as well, like denouncing your home country citizenship and mandatory National Service for two years in certain cases.

Singapore is considered as one of the best cities in Asia to live in. It is safe, environment friendly and westernised. It ranks high in most of the World Rankings and reports and is said to have a high quality of living. These factors among others attract many of us to Singapore, often on a long term basis. Consequently, many of us toy with the question of whether or not to secure Singapore Citizenship. This guide compares the pros and cons of becoming a Singapore citizen.

Singapore in the 1950s to 1990s
The Surprising Truth About The Homeless In Singapore
Tent Village: Singapore’s nomad families
Why do people hate Singapore?
Singapore: Best Place to Live and Work
Plight Of The Tissue Peddlers
Have you ever Spoken to a Cardboard Uncle or Aunty?
Singapore’s Story: What comes next
Singapore at 50: From swamp to skyscrapers
Singapore Good Old Times
The Poor & Homeless in Singapore
Support for the Needy and Elderly
The Singapore Story
Other Side of The Singapore Story
ChasingThe Singapore Dream
To Be Or Not To Be Singaporeans
Longing for the good old days
Singapore: A Sampan or a Cruise ship?
Singapore at 50: From swamp to skyscrapers
Singapore is ‘World’s Costliest City To Live In’
Coping with Inflation & Cost Of Living
COL goes Up, Up, Up!
Singapore “Swiss” Standard of Living
Tackling poverty the 'kuih lapis' way
Callings for a Poverty Line
Setting a poverty line may not be helpful
A minimum wage for Singapore?
No homeless,destitute starving people in S'pore:Poverty has been eradicated
Growing Up With Less
Posted by Under The Angsana Tree at 00:18