Plight Of The Tissue Peddlers 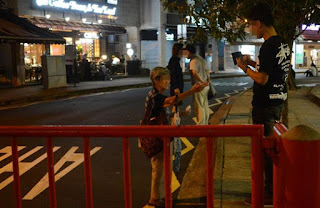 I had earlier posted about the PRC man begging (updates below). Curiously, the day after, I met an old lady selling tissue paper outside POMO. I spoke to her at length. She was reluctant to share her personal info but I managed to glean out some. She was going to turn 82 soon. She claimed that both her children didn't give her much hence her need to come out to sell things. She sounded scared to share details even after I assured her of our help because she seemed fearful of her daughter who she claimed had locked her out before. She later said that she was in not too bad a state and only came out to sell occasionally. She also added that she was selling to help someone.

She seemed in good condition and I couldn't determine if she was in financial distress...but at 82 and needing to do this? And with the fragments she shared...I was concerned at her well being from her children.

I asked the authorities to follow up and they found her there after visiting POMO twice. They got more details from her. The assessment is that she doesn't need immediate help but she knows who to follow up with if she does.

related: Other lady was sitting on the floor selling tissue paper

Have you ever heard of a tissue seller who sells tissues for fun? Apparently, Minister Tan Chuan-Jin met one. Minister for Manpower Tan Chuan-Jin is highly active on social media and often shares stories about the everyday people he meets. Some of them require help, while others seem contented with life.

Somehow, he managed to meet an old lady who sells tissues not because she’s poor, but because she wants to get out of the house and keep herself occupied.

After a chat, he concluded that she was probably doing fine, although skepticism for her well-being still exists. He wouldn’t have approached her otherwise.

Tissue sellers and their plight 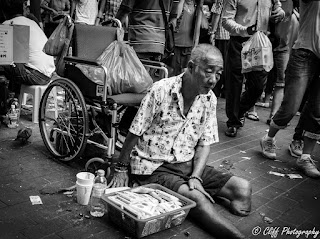 Most of us might have heard stories of the elderly and disabled resorting to selling tissue paper for a living. Some unscrupulous “businessmen” even take advantage of the unfortunate by running tissue peddling syndicates, leaving a cut of the profits for themselves.

Last year, the National Environment Agency (NEA) was slammed for imposing a $120 license fee for tissue peddlers. NEA was derided for adding on to the plights of these tissue sellers and was accused of lacking compassion, but part of the reason for imposing the license was so that tissue peddling can be regulated, and these syndicates can be stopped.

The elderly lady that Minister Tan talked to has two daughters and a husband who works. Whether the old lady is a retiree or not is unclear, but she appears to be selling tissues because she has nothing to do, rather than because she is hard-up on cash; something Minister Tan wouldn’t have found out if he hadn’t chatted with her. 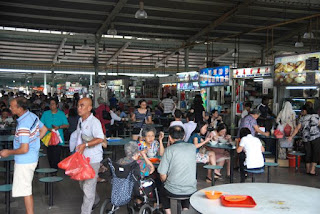 This came from a statement made by the National Environment Agency (NEA) on Tuesday afternoon in response to an online letter on the issue.

The NEA noted that the “nominal fee” of $120 a year, or $10 a month, “entitles them to peddle their wares at fixed locations without having to pay any rent”.

Tissue peddlers, therefore, fall within this category of street hawkers, and are required to pay $120 for annual licences to sell tissue in public, and those who do not are in breach of the laws against itinerant hawking, it said. 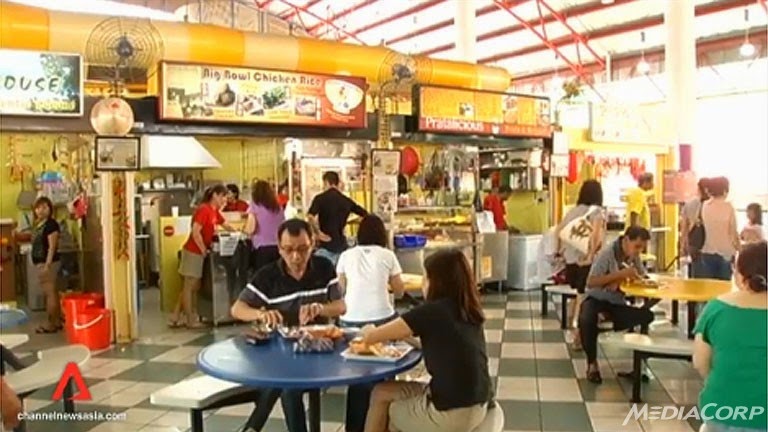 Mobile peddlers selling packets of tissue paper on the streets are unlicensed hawkers, said the National Environment Agency (NEA) in response to a letter posted on a website that these peddlers are charged a S$120 licence fee.

“Although technically in breach of the laws against itinerant hawking, those peddlers who are needy are referred to the relevant agencies by the NEA for appropriate assistance,” the agency said on its Facebook page on Tuesday.

In a letter posted on the socio-political website The Real Singapore, the writer had questioned the need for street hawkers to pay S$120 to get a licence following his encounter with a visually-impaired man who sells tissue paper for extra income. 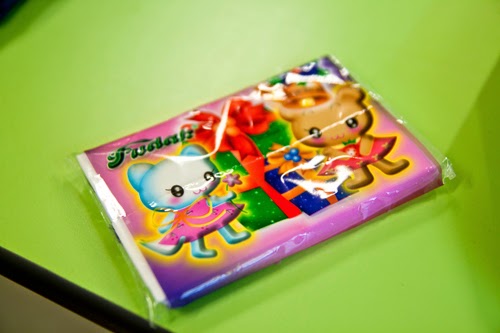 “Although technically in breach of the laws against itinerant hawking, those peddlers who are needy are referred to the relevant agencies by NEA for appropriate assistance,” said the National Environment Agency (NEA).

The agency was asked for its views following a report in the website, The Real Singapore, which highlighted that the authorities impose a S$120 annual licence fees for tissue peddlers.

The article, which apparently was submitted by a member of the public, said that the writer had an encounter with two visually impaired men. One of the men told him that he was selling tissue paper “to supplement his income as he cannot find a regular job.” 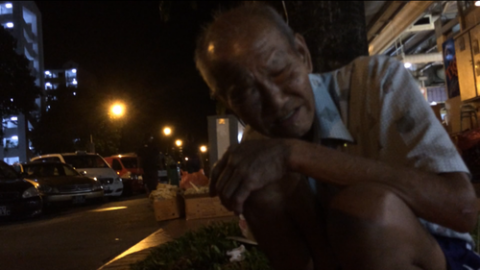 There’s a tissue paper uncle at the hawker centre nearby who I regularly buy tissue from. He used to sell them in bunches of four with a rubber band tied around them, and he used to write four numbers on each bunch - if you were interested in getting lucky with them. At the time I thought this was a clever idea - you can see some effort being put into the ‘work’ he was doing.

He doesn’t do this anymore. It’s now the regular tissue packets, no quirky details.

Last night, as I bent down to get tissue from him there was a man telling him, “Uncle, don’t do stupid things, uncle. Cannot.” I passed him the $2 and took one packet for myself and walked away slowly. Clif and I looked back and saw that he motioned slitting his wrists and realised what the guy meant.

These tissue paper sellers are fiercely independent. They work because they do not want to be a burden to the society.

We should respect that and two, how we can proceed from here..is to give them a little respect, offer your couple of dollars and thank them for their service. Finally, there are always people out there who need help.

How that help looks like could be just a listening ear or more. We’ll just need to listen first to figure it out.

People pay more to buy from him, but tissue uncle 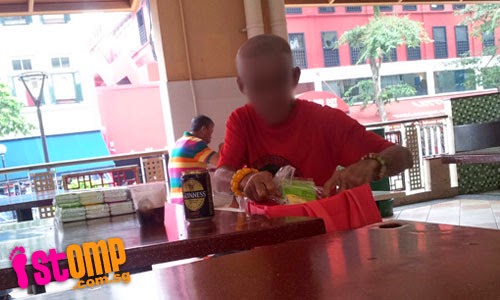 STOMPer Giver feels that it's not right for this elderly man, who sells tissue paper at a higher price to customers, to be spending his money on beer.

Said the STOMPer: "I was having a drink at a hawker centre in Bugis when I saw a tissue uncle sitting on the next table taking a break. "He was re-packing the tissue from the big bag into small packets for sale. "Most people buy from them, at a high mark-up price, because of charity or pity. "But this uncle seems to give the wrong impression by having a drink of stout. "I'm not saying he can't but please why do it so openly.

"Many people were staring at him but he don't seem to care. I now have doubts on how real these people are."

However unlike many other disadvantaged Singaporeans, she sings for her sale, rather than just selling them. She was made famous by Tan Pin Pin’s 2005 documentary, “Singapore Ga Ga”. Check out the documentary, a great piece on Singapore.

Whenever she is around, she really brightens my day with her beautiful singing, making it a rather colorful neighbourhood rather than a static and stagnant one. Thank you, I do hope to see you again. 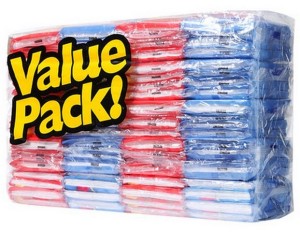 If you do the Math, 80 packs of pocket tissues can net over 26 bucks. Minus the 4.25 cost, and minus the fact that many buyers don’t take all three packs – that’s a heck of a lot of profit. Peanuts, but profitable nevertheless.

Is this why there are so many tissue sellers these days?

Have you ever Spoken to a Cardboard Uncle or Aunty? 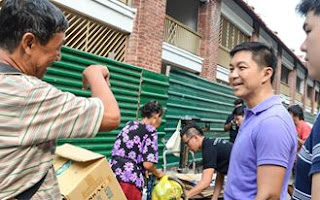 Of the various uncles and aunties I spoke to, this lady in the background was the one I had most concern with. She sounded open to needing help. SSO has her details and will refresh and review again to see if circumstances had changed since they last knew of her situation

While I often chat with them when I meet them, I haven't gone so far up the value chain to know the middle man and the whole set-up. I was most happy to join a group of young Singaporeans from Youth Corp on a project they initiated - to get first hand insight into the lives of elderly cardboard collectors: what motivated them to do what they do; and the challenges they face. The youngsters devoted their weekends over a 2-month period to befriend the cardboard aunties and uncles on the streets in the Jalan Besar area, and spent time talking to them to understand what they are going through in life.

They shared with me that they were surprised by their own findings! The normal perception that all cardboard collectors are people who are unable to take care of themselves financially is not really true. There will be some who do this as their main source of income. Some do so to supplement what they have. Some prefer to earn extra monies, treat it as a form of exercise and activity rather than being cooped up at home. They do this to remain independent, so that they can have dignity and not have to ask their families for help.

For members of the public, the simplest thing that one can do for these people is to talk to them to understand them. More often than not, people make judgements without finding out the facts of the matter, in this instance, the stigma surrounding cardboard collectors. But of course, for those who genuinely need financial help because they are unable to find other jobs to supplement their income from cardboard collecting, the government will do what it can to help these people. If you know of individuals who need help, do let us know.

Collecting Cardboards from "a form of exercise" to "protecting our environment" 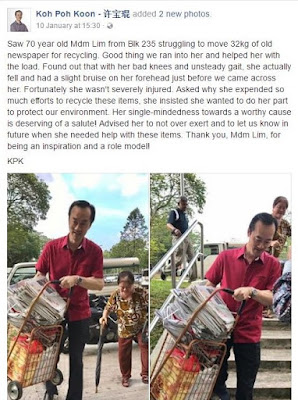 Saw 70 year old Mdm Lim from Blk 235 struggling to move 32kg of old newspaper for recycling. Good thing we ran into her and helped her with the load. Found out that with her bad knees and unsteady gait, she actually fell and had a slight bruise on her forehead just before we came across her. Fortunately she wasn't severely injured. Asked why she expended so much efforts to recycle these items, she insisted she wanted to do her part "to protect our environment." Her single-mindedness towards a worthy cause is deserving of a salute! Advised her to not over exert and to let us know in future when she needed help with these items. Thank you, Mdm Lim, for being an inspiration and a role model!

Why do people hate Singapore?
Singapore: Best Place to Live and Work
Singapore’s Story: What comes next
Singapore at 50: From swamp to skyscrapers
Singapore Good Old Times
The Singapore Story
Other Side of The Singapore Story
ChasingThe Singapore Dream
To Be Or Not To Be Singaporeans
Longing for the good old days
Singapore: A Sampan or a Cruise ship?
Singapore at 50: From swamp to skyscrapers
Singapore is ‘World’s Costliest City To Live In’
Coping with Inflation & Cost Of Living
COL goes Up, Up, Up!
Singapore “Swiss” Standard of Living
Tackling poverty the 'kuih lapis' way
Callings for a Poverty Line
Setting a poverty line may not be helpful
A minimum wage for Singapore?
No homeless,destitute starving people in S'pore:Poverty eradicated
Growing Up With Less
Posted by Under The Angsana Tree at 00:02