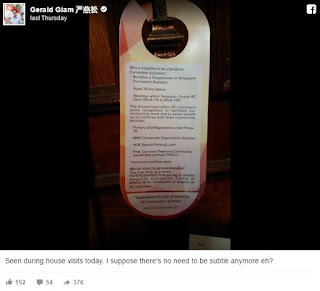 Seen during house visits today. I suppose there's no need to be subtle anymore eh? 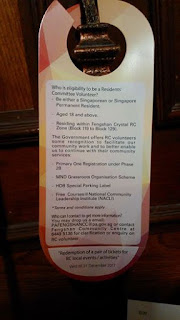 Former Non Constituency Member of Parliament, Gerald Giam, shared a picture of door-hanger leaflet from the People’s Association (PA), advertising perks to entice residents to join the grassroots organisation. The advertisement from the PA’s Fengshan Crystal Residents’ Committee (RC) was targeted at residents living in Blocks 119 to 129 of Bedok North Road.

Mr Giam noted that the PA sees no need to be subtle about the perks its volunteers received.

BENEFITS AND ALLOWANCES FOR GRASSROOTS LEADERS AND ADVISERS

Grassroots Leaders (GRLs) are volunteers who serve the community actively. They help bond residents to weave our social fabric; gather feedback for government to improve our policies and services; and they help to close the last mile in our policy communications and delivery.

The Government recognises GRLs’ contributions and facilitates their community work. Information on these schemes has been provided during previous Parliament sittings and has also been made available online separately.

To facilitate their work, like engaging residents and conducting community activities, GRLs may apply for a special parking label after first purchasing a HDB season parking label. This label allows them to park at designated car parks up to 11 pm in the constituency they serve.

Eligible GRLs can apply for P1 registration for their children under Phase 2B in schools within the constituency they reside in. This is similar to school and parent volunteers. Eligible GRLs can apply for BTO flats and ECs under a HDB scheme. These long serving GRLs typically help to bond the new communities in the new estates. These schemes recognise the GRLs’ contributions to community building and provide platforms for them to continue strengthening their community services.

To facilitate their work in their constituencies, Grassroots Advisers (GRAs) may also apply for the special parking label, after first purchasing a HDB season parking label. GRAs are not eligible for the P1 registration or HDB schemes mentioned above. 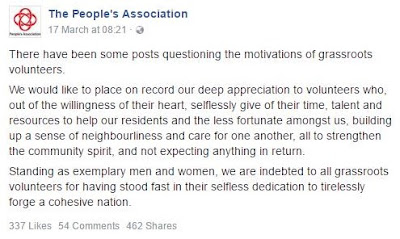 There have been some posts questioning the motivations of grassroots volunteers.

We would like to place on record our deep appreciation to volunteers who, out of the willingness of their heart, selflessly give of their time, talent and resources to help our residents and the less fortunate amongst us, building up a sense of neighbourliness and care for one another, all to strengthen the community spirit, and not expecting anything in return.

Standing as exemplary men and women, we are indebted to all grassroots volunteers for having stood fast in their selfless dedication to tirelessly forge a cohesive nation.

The People’s Association (PA) has come to the defence of its volunteers after a stinging rebuke from former Non Constituency Member of Parliament, Gerald Giam, about the PA advertising perks to entice residents to join the grassroots organisation. In a Facebook post it described its volunteers as “exemplary men and women” with “selfless dedication”.

Some of the PA’s grassroots volunteers praised the efforts of the volunteers, but yet others said the rewards they received for their work goes against the very ethos of volunteerism – among them are prominent socio-political commenters.

One such commenter, Dr Paul Tambyah, in responding to the PA’s post said: It would be great then if perks such as special parking, primary school admission priorities, free courses, etc, are removed completely so that any hint of wrong motivations is eliminated, and the volunteers are not unfairly tainted because these perks are offered. Removal of all of these would send a strong message of support to these volunteers that we all really appreciate their selfless sacrifice.” 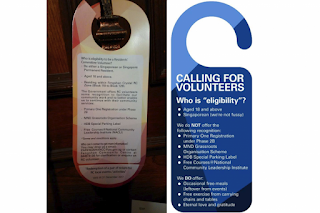 A residents' committee's effort to grow its grassroots network in the Fengshan constituency has instead courted unwanted attention over the benefits that its volunteers receive.

The recruitment drive drew a response from the Workers' Party (WP), which contested the single seat in the last general election & continues to walk the ground there.

On Tuesday (Mar 21), Fengshan MP Cheryl Chan told The Straits Times the ground-up initiative had been misconstrued, adding that volunteers give their time out of passion & commitment. 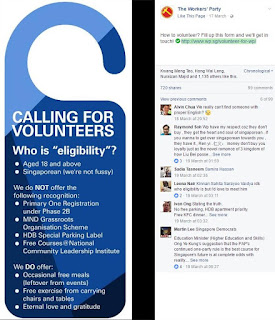 How to volunteer? Fill up this form and we'll get in touch! http://www.wp.sg/volunteer-for-wp/

TIME FOR GRASSROOTS VOLUNTEERS TO SERVE FROM THE HEART, NOT FOR GOODIES OR BENEFITS 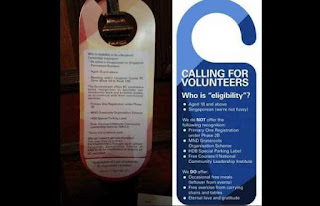 Grassroot volunteers have long been blessed with benefits such as free parking and priority to Primary schools within the estate. All these unfair benefits should be removed so that the volunteers we attract for the community are helping out for the right reasons.

Remember the case of Yang Yin who was doing grassroots work for nefarious purposes? This is the kind of people our Grassroots attract when such benefits are dangled as carrots.

It is high time to remove all these perks and accept only those who have the community at heart and wish to serve. This way it also helps the Peoples Association improve their image and shut those critics who accuse volunteers of helping out for ulterior motives. 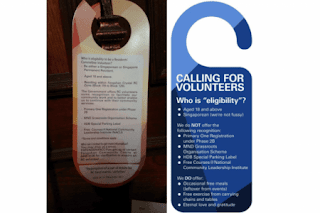 Former Non-constituency Member of Parliament (NCMP) Yee Jenn Jong wrote in his blog on Tuesday (21 March) about the flyers that were recently circulated by the residents' committee of Fengshan constituency, and the privileges that seem to come with serving as a grassroots volunteer.

In his post, he mentioned that the issue over priority given to Primary 1 students whose parents are active community leaders was something that he addressed in Parliament in 2012. Subsequently in 2013, Yee joined in on the debate and asked "if it can be a criterion for community leaders to have first made specific contributions to the schools before they are being considered for priority" to then-Senior Minister of State for Education (SMS), Ms Indranee Rajah.

The flyers from the residents’ committee of Fengshan constituency not only drew a response from Yee, but also from the Worker's Party (WP), which had contested the single seat during the previous election. WP's response was the flyer pictured on the right, aimed to mimic the recruitment efforts.

Netizens were unimpressed, to say the least, and criticized the RC for attracting the wrong kind of volunteers.

The Workers’ Party was quick to grab the opportunity with both hands and took a jibe at the RC by creating a tongue-in-cheek spoof of their door flyer — and it was pure genius. 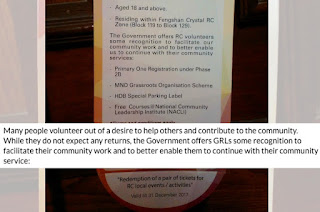 An RC volunteer is a grassroots person and RCs were established to “promote neighbourliness, racial harmony and community cohesiveness amongst residents within their respective RC zones in Housing and Development Board estates”.

Essentially, people serving as grassroots leaders are the lubricant between the people and the authorities. They serve to disseminate information and give feedback on behalf of the people regarding government policies and the needs of the residents.

related: WP makes its own door hanger calling for volunteers, ‘eligibility’ typo & all

Mr Gerald Giam Yean Song, a politician from the Workers’ Party, was doing a walkabout around the Fengshan neighbourhood and conducting house visits when he chanced upon a tag on a door knob that bemused him.

Apart from an egregious grammatical error in the first sentence (Who is *eligible to be…), the tag contained details regarding the recruitment of residents to be a Residents’ Committee volunteer, offering perks like special HDB parking labels and Primary One (Phase 2B) registration benefits in a bid to tempt residents to sign up.

Singaporeans are suckers for goodies and freebies, but it remains to be seen how effective this carrot-dangling scheme will be in securing more volunteers. Once special privileges are on offer for volunteering services, should the people volunteering still be considered volunteers? It sounds more like a job than anything else.

The volunteerism rate has doubled. But why exactly? 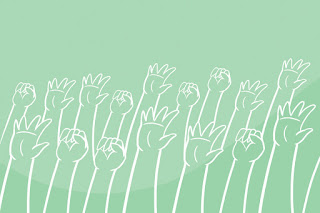 THE rate of volunteerism in Singapore almost doubled from 2014 to 2016, rising from 18 to 35 per cent. And this trend – according to the Individual Giving Survey 2016, conducted by the National Volunteer and Philanthropy Centre (NVPC) – “could be related to the resurgence in informal volunteerism” (emphasis mine), through which Singaporeans volunteer directly without going through an organisation. In its press release, NVPC then detailed examples of social and ground-up movements in Singapore, to illustrate a second point that the number of volunteers who serve informally has increased from 25 to 51 per cent, over the same time period.

Straits Times christened this “a resurgence of the kampung spirit” (Mar 16). TODAY quoted NVPC director for knowledge and advocacy, Jeffrey Tan on this “giving revolution”, “where people are volunteering and donating informally, directly with beneficiaries, without going through the formal routes” (Mar 16). Notwithstanding the questionable hyperbole, everyone seems to take for granted this causal relationship between the rise in the volunteerism rate and the increase in informal volunteerism. Correlation is not causation. In fact, we still appear to know little about what exactly drives volunteerism in Singapore, and how it can be sustained in the long-term. NVPC said it could be informal volunteerism, but we do not know for sure.

The PA endeavours to achieve its objects by creating common space; bringing people of different ethnic origins and from all walks of life together to interact, make friends, help one another and to participate in social, cultural, educational, recreational, sporting and charitable activities, and in doing so strengthen community spirit and resilience.

read more
Posted by Under The Angsana Tree at 00:01