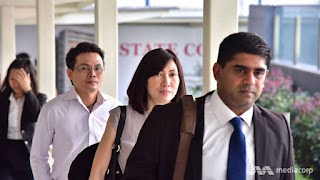 The couple who got into an ugly spat with an elderly man at a hawker centre in Toa Payoh was handed a S$2,700 fine on Friday (Aug 11).

Chow’s partner, Tay Puay Leng, 39, was fined S$1,200 for using abusive words on Mr Ng with the intent to cause alarm.

The couple who bullied an ah pek at a hawker centre in Toa Payoh Lorong 8 in in April have been charged in court.

45-year-old Chow Chuin Yee, who barged into the 76-year-old ah pek from behind, was charged with using criminal force.

38-year-old Tay Puay Leng was charged with intent to cause alarm, after she was caught scolding the ah pek using vulgar language.

related: Police arrested the couple 4 days after the incident 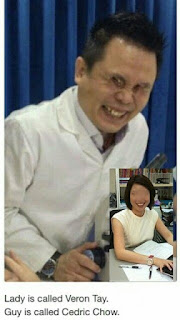 Chinese Daily Lianhe Wanbao today exposed the ugly past of the man who banged an elderly man at Lorong 8 Toa Payoh hawker centre. The man who has since been identified as Chow Chuin Yee, a director at Novel Learning Centre.

The Chinese Daily quoted a 60-year-old neighbour saying how Chow banged on his shoulder and taunted him after doing so. He later made a police report on the elderly man.

The neighbour who declined to be named said he was returning home with two large bags after grocery shopping, when Chow deliberately knocked into him to get into the lift.

Before anything, here’s something you should consider: this entire story is being told by one neighbour.

If this is untrue, then the TPY Bully must have had made someone really unhappy.

If this is true, then the TPY Bully would have made many Singaporeans really unhappy. 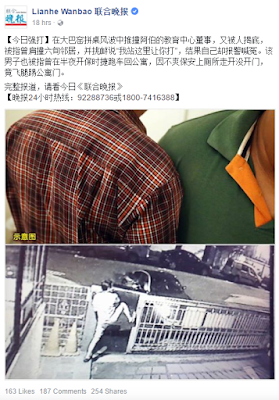 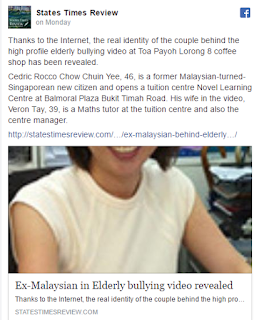 Thanks to the Internet, the real identity of the couple behind the high profile elderly bullying video at Toa Payoh Lorong 8 coffee shop has been revealed.

Cedric Rocco Chow Chuin Yee, 46,  is a former Malaysian-turned-Singaporean new citizen and opens a tuition centre Novel Learning Centre at Balmoral Plaza Bukit Timah Road. His wife in the video, Veron Tay, 39, a Singaporean citizen, is a Maths tutor at the tuition centre and also the centre manager.


The tuition centre’s Facebook page and website has since been deleted after Chinese newspaper Zao Bao confirmed their identity. The couple were arrested following multiple police reports made on the video.

Investigation by Sin Ming Daily Paper has identified the couple that was featured in the recent viral video at a Toa Payoh Hawker Centre, as a director and an educator at a local tuition centre. According to the Chinese Paper, its investigations has confirmed that the 46-yr-old male is a director of a tuition centre and the 39-year-old who is the wife, Ms Vernon Tay is a mathematics teacher at the same centre.

It revealed that based on information from ACRA, the tuition centre was formed in May 2011 with three directors, including the male who is involved in the incident. The male is also a director of two other companies, one providing higher education courses while the other, is a renovation company.

While the Chinese Paper has noted the position of the director but the actual identity of the male director cannot be identified at the moment because ACRA's website is under maintenance. It is noted that the website's page on the centre's teachers has been removed. 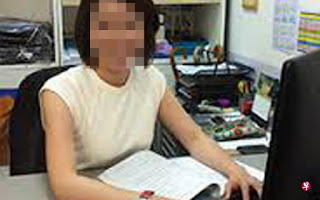 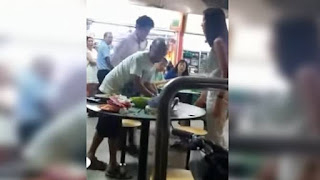 Screen capture of an elderly man being shoved from behind by a younger man at a hawker centre in Toa Payoh. (Video: YouTube)

Police on Tuesday (Apr 25) arrested a 46-yr-old man and a 39-yr-old woman for causing public nuisance at a hawker centre in Toa Payoh.

In a statement, the police said they received reports on Sunday about a couple who allegedly used offensive language and force against a 76-yr-old man at Toa Payoh Lorong 8 market & hawker centre.

Investigators established the identities of the 2 people and they were arrested. Investigations are ongoing. 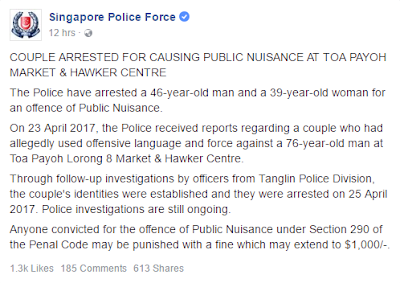 The Police have arrested a 46-year-old man and a 39-year-old woman for an offence of Public Nuisance.

On 23 April 2017, the Police received reports regarding a couple who had allegedly used offensive language and force against a 76-year-old man at Toa Payoh Lorong 8 Market & Hawker Centre.

Through follow-up investigations by officers from Tanglin Police Division, the couple's identities were established and they were arrested on 25 April 2017. Police investigations are still ongoing.

Singapore’s idiosyncratic “chope” culture also brought into question if such a practice was a practical life hack, or simply ungracious. On one hand, choping seats ensures that we do not have to end up carrying our food around in circles while looking for a seat, or have our food turn cold. On the other, reserving of seats could seem unfair to those who have already bought their food and are in search of a seat. It also disadvantages elderly patrons like the one in this Toa Payoh incident.

According to The Sunday Times, this habit of reserving seats is not practiced in overseas. A lady said that in Hong Kong, they actually moved their things away if someone wanted to sit, and felt that choping was strange. Foreigners who were brushed away by locals defending their reserved seats felt that our “chope” culture had tarnished their image of Singapore.

So should we chope or not? Personally, I feel that we should always exercise kindness and consideration for others, and practice a spirit of give-and-take empathy. We should at the very least, share seats at a table and not chope more seats than necessary.

CHOPE! I CHOPE! This seat is mine!

On April 22nd, 2017, Facebook User Manny Quest uploaded a footage of a heated dispute between a young couple and an elderly man that occurred a day before. The video begins with the lady arguing with the old man on the issue of the “reserved” seats or as we Singaporeans affectionately call “choped” seats. At around the 22-second mark of the footage, a man, presumably her boyfriend, bumped against the elderly man, causing the old person to stumble forward. It could have been a hard fall, but fortunately, the old man steadied himself by grabbing hold of the hawker table.

On 25th April 2017, the police arrested the couple involved in the incident for causing public nuisance.

Legal Questions raised - Some of us out there may have questions regarding this matter. It is also worth nothing that there are many legal questions and issues and they, and not limited to, as follows: 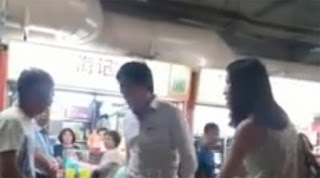 A 46-year-old man and a 39-year-old woman were arrested for the offence of public nuisance, the police said in a statement early Wednesday (26 April).

The police said they had received reports on 23 April regarding the couple, who had allegedly used offensive language and force against a man, 76, at Toa Payoh Lorong 8 Market and Hawker Centre.

A recent online video showing the encounter has gone viral. Facebook user Janice Lim, who said that she was at the scene, recounted that after an elderly man approached a table with the intention of occupying a seat, a woman claimed that it was “reserved” with a folded umbrella and told him off.

After an eye witness at the Toa Payoh Lorong 8 Market and Food Centre pushing incident, Janice Lim, came forward to share the full account of what actually happened on the scene, the daughter of the victim has stepped forward too to give her account.

Caroline Ng expressed anger and disgust over what happened to his dad and condemned the actions of the couple involved. She also thanked the Singaporeans who showed support for his dad. However, she caution against any online vigilantism, appealing to the public to submit any information regarding the couple to the police or relevant authorities instead of trying to take things in their own hands. One online vigilante, Ang Tock Seng, learned his lesson the hard way, being the subject of an online CSI now after he wrongfully fingered a Cherry Tan as one of the culprit in the pushing incident.

Ng also shared that she might be pursuing a civil lawsuit against the couple. Whoever they are, they probably are having a hard time sleeping now. 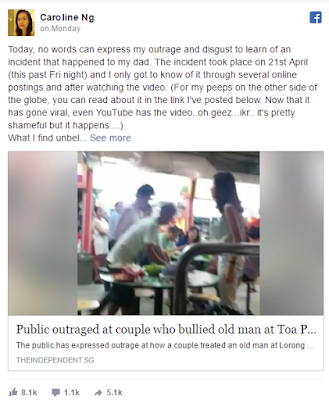 Our hawker and food centres are public places. Seatings are first come first serve basis. While I understand it's common practice for many of us (including myself) to leave an artifact to reserve seats while queuing for food, since when does this equate to entitlement or ownership of these public items?

To get in depth with Singapore's infamous "chope seat" system will require a whole separate discussion, which I am not about to get into here .... Bottom line is (doesn't matter who is there first), my dad only wanted to share the table, there were only 2 of them (the couple) and their food wasn't even ready .... Will it kill them just to share the seats??!

I mean .. seriously??!! Not only the woman was uncouth with her hurling of abusive profanities, her companion just had to despicably ram my dad from behind, trying to knock him off his feet! ... no matter who is in the right or wrong, nobody should be treated in this manner, let alone to an old folk. 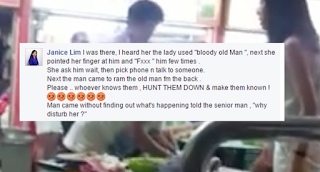 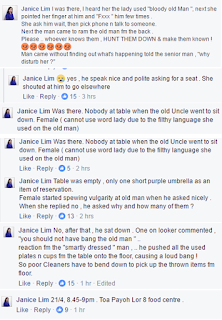 We got in touch with Janice Lim, identified via her Facebook comments on the viral video to be a credible first person witness when the pushing incident happened at Toa Payoh Lor 8 Market and Food Centre last night.

In the video, a well-dressed lady is seen arguing with an old man over the seats at a round table in the hawker centre.

She called someone for help and an equally well-dressed young man came to her rescue, shoving the old man from behind, causing him to fall forward.

The spat at a Toa Payoh hawker centre over the reservation of seats led to readers writing to the Forum page calling for a ban on "choping". Here are some excerpts from the letters.

The incident highlights the need to address this anti-social behaviour.

I have no issue when a person sits at a table and reserves it for his friends or family. But I do find it inconsiderate when tissue packs, name cards, umbrellas and other objects are used to "chope" a table. 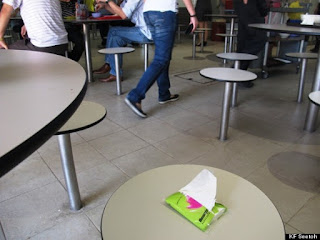 Chope, This Seat Mine: The Immutable Laws Of Singapore’s Hawker Centers

I have witnessed overly-cultured and genteel visitors from strange lands descend onto our popular hawker centre (where they serve flavors that define the country’s culinary culture), at mad peak hour moments and wonder, “Ahem, so is someone going to show us to a table for 4?” Not going to happen ma’am.

The technique of securing seats at those feeding frenzy hours had long ago been reduced and translated to a fine art form called “chope.” The first thing chope master artists do is to hone in on an empty table and mark their turf — by putting the cheapest or most useless personal item they have on them, usually a half used tissue pack, a cheap ball point pen or even a worthless bargain stall umbrella on the seat. That, in mod-Singapore street food speak, means “lay off, she’s taken,” or in local vernacular called Singlish “Chope, this seat mine” (a local English slang, sans the polite grammar and attitude the British left us with).

These are the 10 immutable laws of using Singapore’s hawker centres:

Bickering over a Reserved MRT seat

A video of a woman and an auntie engaged in an altercation over an MRT reserved seat has been circulating on Facebook.

The video, shared on Sure Boh Singapore’s Facebook page, shows a woman sitting on the reserved seat on board a MRT train. An auntie in turquoise can be seen standing in front of her. The woman then told the auntie:
read more

Kopi Siew Tai
Posted by Under The Angsana Tree at 00:02