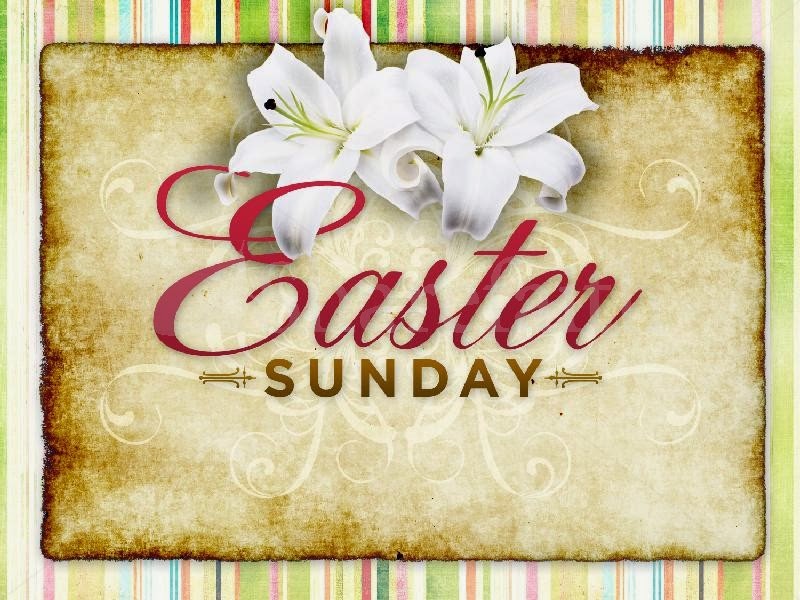 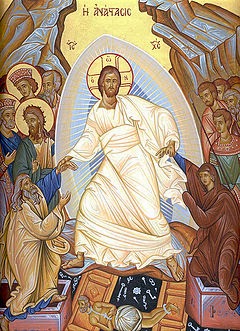 Eastern Orthodox Christian icon depicting the Harrowing of Hell or Descent into Hades (cf. Resurrection of Jesus in Christian art)

Easter (Old English usually Ēastrun, -on, or -an; also Ēastru, -o; and Ēostre), also called Pasch (derived, through Latin: Pascha and Greek Πάσχα Paskha, from Aramaic: פסחא‎, cognate to Hebrew: פֶּסַח‎ Pesaḥ), or Resurrection Sunday, is a festival and holiday celebrating the Resurrection of Jesus Christ from the dead, described in the New Testament as having occurred three days after his crucifixion by Romans at Calvary. It is the culmination of the Passion of Christ, preceded by Lent (or Great Lent), a forty-day period of fasting, prayer, and penance.

The week before Easter is called Holy Week, and it contains the days of the Easter Triduum, including Maundy Thursday (also known as Holy Thursday), commemorating the Last Supper and its preceding foot washing, as well as Good Friday, commemorating the crucifixion and death of Jesus. In western Christianity, Eastertide, the Easter Season, begins on Easter Sunday and lasts seven weeks, ending with the coming of the fiftieth day, Pentecost Sunday. In Orthodoxy, the season of Pascha begins on Pascha and ends with the coming of the fortieth day, the Feast of the Ascension.

Easter is a moveable feast, meaning it is not fixed in relation to the civil calendar. The First Council of Nicaea (325) established the date of Easter as the first Sunday after the Paschal Full Moon, the full moon that occurs on or soonest after 21 March (taken to be the date of the equinox). Ecclesiastically, the equinox is thus reckoned to be on 21 March (although the astronomical equinox occurs on 20 March in most years), and the "Full Moon" is not necessarily on the astronomically correct date. The date of Easter therefore varies from 22 March to 25 April inclusive. Eastern Christianity bases its calculations on the Julian calendar, whose 21 March corresponds, during the 21st century, to 3 April in the Gregorian calendar, and in which therefore the celebration of Easter varies between 4 April and 8 May.

What do Christians Celebrate on Easter? 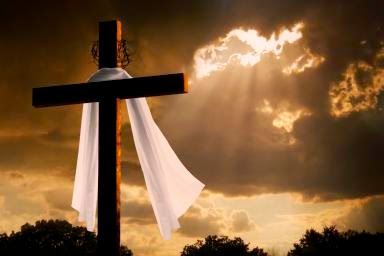 Because of Easter's pagan origins, and also because of the commercialization of Easter, many Christian churches choose to refer to the holiday as Resurrection Day

On Easter Sunday, Christians celebrate the resurrection of the Lord, Jesus Christ. It is typically the most well-attended Sunday service of the year for Christian churches.

Christians believe, according to Scripture, that Jesus came back to life, or was raised from the dead, three days after his death on the cross. As part of the Easter season, the death of Jesus Christ by crucifixion is commemorated on Good Friday, always the Friday just before Easter. Through his death, burial, and resurrection, Jesus paid the penalty for sin, thus purchasing for all who believe in him, eternal life in Christ Jesus.

In Western Christianity, Easter marks the end of Lent, a 40-day period of fasting, repentance, moderation and spiritual discipline in preparation for Easter. Lent begins on Ash Wednesday and ends on Easter Sunday. Eastern Orthodox churches observe Lent or Great Lent, during the 6 weeks or 40 days preceding Palm Sunday with fasting continuing during the Holy Week of Easter. Lent for Eastern Orthodox churches begins on Monday and Ash Wednesday is not observed.

Easter in the Catholic Church 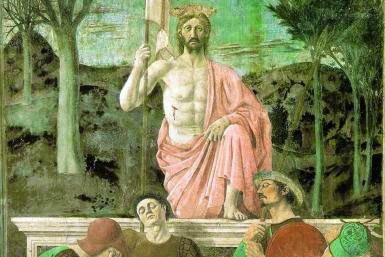 Easter is the greatest feast in the Christian calendar. On this Sunday, Christians celebrate the resurrection of Jesus Christ from the dead. For Catholics, Easter Sunday comes at the end of 40 days of prayer, fasting, and alms giving known as Lent. Through spiritual struggle and self-denial, we have prepared ourselves to die spiritually with Christ on Good Friday, the day of His Crucifixion, so that we can rise again with Him in new life on Easter.

Easter is a day of celebration because it represents the fulfillment of our faith as Christians. St. Paul wrote that, unless Christ rose from the dead, our faith is in vain (1 Corinthians 15:17). Through his death, Christ saved mankind from bondage to sin, and He destroyed the hold that death has on all of us; but it is His Resurrection that gives us the promise of new life, both in this world and the next.

The Coming of the Kingdom - That new life began on Easter Sunday. In the Our Father, we pray that "Thy Kingdom come, on earth as it is in Heaven." And Christ told His disciples that some of them would not die until they saw the Kingdom of God "coming in power" (Mark 9:1). The early Christian Fathers saw Easter as the fulfillment of that promise. With the resurrection of Christ, God's Kingdom is established on earth, in the form of the Church.
related: Everything You Need to Know About Easter in the Catholic Church

"What is Easter Sunday?"

Biblically speaking, there is absolutely no connection between the resurrection of Jesus Christ and the common modern traditions related to Easter Sunday. As a background, please read our article on the origins of Easter. Essentially, what occurred is that in order to make Christianity more attractive to non-Christians, the ancient Roman Catholic Church mixed the celebration of Jesus' resurrection with celebrations that involved spring fertility rituals. These spring fertility rituals are the source of the egg and bunny traditions. 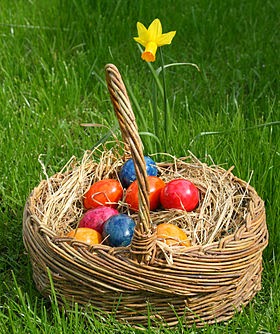 Easter eggs in a basket

Easter eggs, also called Paschal eggs, are decorated eggs that are often given to celebrate Easter or springtime. As such, Easter eggs are common during the season of Eastertide (Easter season). The oldest tradition is to use dyed and painted chicken eggs, but a modern custom is to substitute chocolate eggs, or plastic eggs filled with confectionery such as jelly beans. Eggs, in general, were a traditional symbol of fertility, and rebirth. In Christianity, for the celebration of Eastertide, Easter eggs symbolize the empty tomb of Jesus: though an egg appears to be like the stone of a tomb, a bird hatches from it with life; similarly, the Easter egg, for Christians, is a reminder that Jesus rose from the grave, and that those who believe will also experience eternal life.

The practice of decorating eggshell is ancient, predating Christian traditions.Ostrich eggs with engraved decoration that are 60,000 years old have been found in Africa. Decorated ostrich eggs, and representations of ostrich eggs in gold and silver, were commonly placed in graves of the ancient Sumerians and Egyptians as early as 5,000 years ago.

The Christian adaptation of decorating eggs can be traced as far back as the early Christians of Mesopotamia, who stained eggs red in memory of the blood of Christ, shed at his crucifixion. The Christian Church officially adopted the custom, regarding the eggs as a symbol of the resurrection. The Roman Ritual, the first edition of which was published in 1610 but which contains texts of much older date, has among the Easter Blessings of Food, along with those for lamb, bread, and new produce, the following blessing for eggs.

Although the tradition is to use dyed or painted chicken eggs, a modern custom is to substitute chocolate eggs, or plastic eggs filled with candy such as jelly beans. These eggs can be hidden for children to find on Easter morning, which may be left by the Easter Bunny. They may also be put in a basket filled with real or artificial straw to resemble a bird's nest. 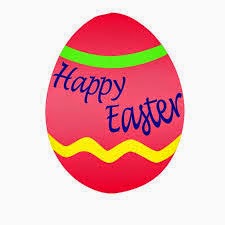 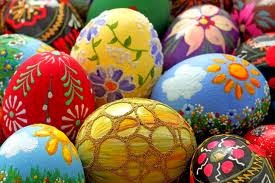 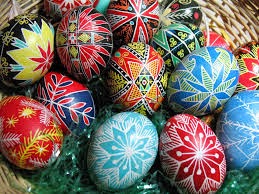 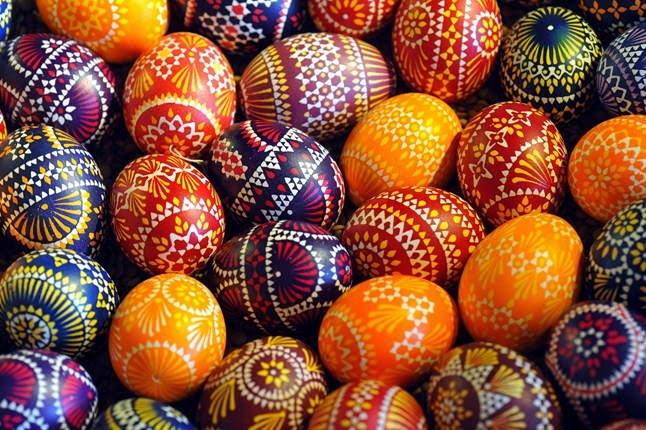 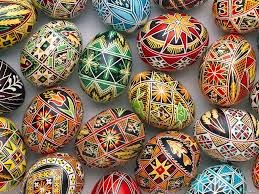 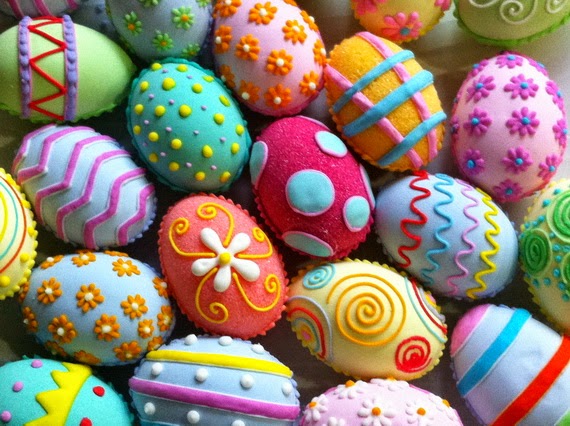 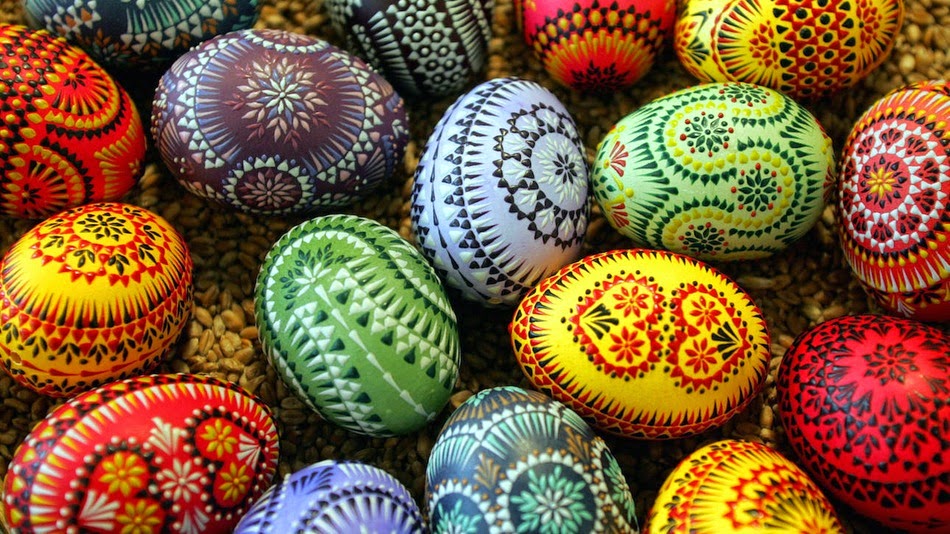 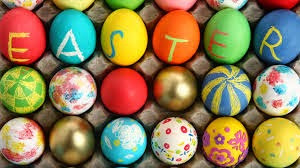 Posted by Under The Angsana Tree at 08:08