CPF: "The gift that keeps on giving"

CPF Board ad encouraging members to gift loved ones 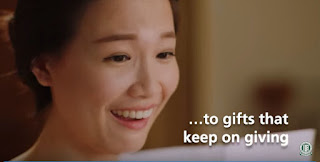 On her tenth year of marriage, the husband gifts his wife “a gift for the years ahead”. The wife is extremely joyful to discover a statement from CPF Board, showing that her husband has topped up her Special Account under the Retirement Sum Topping-Up Scheme.

The wife exclaims “Wow,” before teasing her husband, “So how are you going to top this next year?” as the advertisement asserts, “The future is closer than you think – Be ready with CPF”. 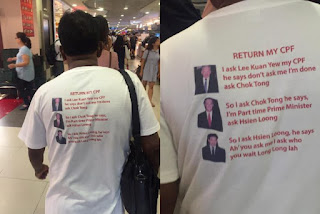 A picture of a man publicly wearing a bold T-shirt calling for the authorities to return his Central Provident Fund (CPF) savings has been going viral online. The picture first surfaced on Reddit before making its way to social media websites like Facebook and Twitter.

The picture of the bold T-shirt is circulating online as issues over CPF’s withdrawal age, payout mechanism and contribution rates have come to the forefront in recent weeks.

CPF contribution rate for workers above 55 should be raised: 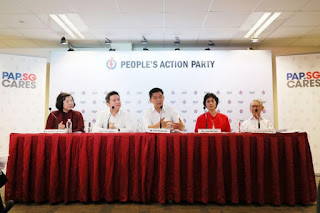 A group in the People's Action Party (PAP) that champions elderly causes is calling for a number of changes to how seniors work, retire & live.

Among other things, the PAP Seniors Group (PAP.SG) - led by chairman Tan Chuan-Jin - is proposing for the Central Provident Fund (CPF) contribution rate for workers beyond the age of 55 to be increased “so that all members continue to enjoy the same level of (contributions) regardless of how old they are”.

The rate for those aged 55 and below is 37%, with employers contributing 17%. 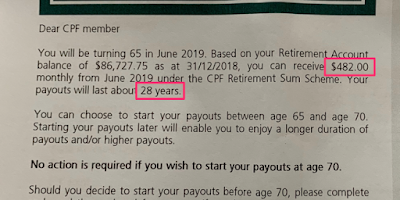 I was born in the year 1954. I am 65 years old this year and I empathise with all who had commented here on The Online Citizen. I would like to share my own ordeal with fellow CPF members

Like the others, I had received a letter from CPF informing me to either apply for a monthly retirement payout at 65 years old, or delay it to 70 years old for a better payout sum. This was nothing new as it had been reported in the news and critiqued by many SIngaporeans including an ex-PAP MP Mr Inderjit Singh. However, the one thing that shocked me was that I could only receive $482 monthly from June 2019 under the CPF Retirement Sum Scheme, and this payout would last about 28 years, when I would be 93 years old.

How can the Central Provident Fund Board decide on the terms of payment for my own money? I would like the Finance Minister to clear the air – does CPF savings belong to each individual member?

I then wrote in and requested for a 20-year payout so as to increase my monthly payout, the reason being Singapore’s life expectancy was 85.4 years (based on statistics reported in the media.) The CPF simply rejected it and cited “current policies” as the reason.

A CPF member has accused the CPF board of barring him from withdrawing the full amount from his Retirement Account before he hits the age of 93.

Writing to The Online Citizen, Zol claims that upon turning 65 years old this year, he was informed that he can “only receive S$482 monthly from June 2019 under the CPF Retirement Sum Scheme, and this payout would last about 28 years.”

By that time, he would be 93 years old. Zol said that he wrote to the CPF Board to request for a 20-year payout so as to increase the amount of payout he would receive every month. However, this request was turned down by the CPF Board.

Lim Tean: “the CPF is a virtual confiscation of your money” 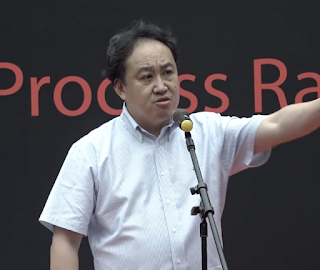 “To me, the CPF is another grave abuse of process.” He explained how he sees the CPF. “I tell you this, and I don’t mince my words, (if it were up to me) I am going to totally scrap the CPF and revamp the system because it is broken.”


He closed his speech by emphasizing the need to rediscover the purpose in Singapore. “We need the creativity and innovation which is lacking in our society today.

I hope that our bicentennial will be an occasion when we will rediscover and we will restore our nation to the exceptionalism that all of us have come to expect.”

related: CPF members should not continue to live in denial 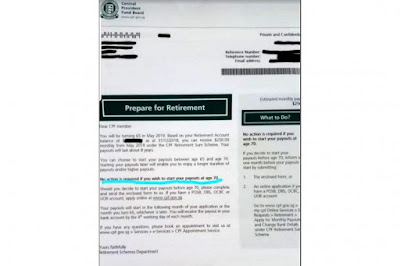 Netizens have raised concerns over a recently circulated letter from the CPF Board, which some have misunderstood as the Government raising the default payout age from 65 to 70.PHOTO: ST READER

The people should not be blamed for starting the rumour about Central Provident Fund (CPF) payout being delayed till the age of 70 (CPF Board refutes claims that payout age raised; Jan 20).

And it is true that if a person does not do anything, then the payout will indeed start at the age of 70.

If the payout is supposed to be at the age of 65, then that should be the default age, & anyone who wants a later payout should have to indicate to the CPF Board that they want it at a later age. 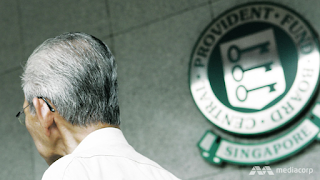 2 Members of Parliament (MPs) have tabled questions for the next Parliament sitting in February on the Central Provident Fund’s (CPF) retirement payout scheme.

This comes after a letter on the issue was posted online, sparking discussions on whether the monthly payouts under the Retirement Sum Scheme should be made automatic when CPF members turn 65.

Along with the letter was a claim that CPF had “quietly” shifted its payout age from 65 years old to 70 years old. This was later debunked by the CPF Board in a Facebook post.

related: Claims that CPF 'retirement payout age' shifted to 70 not true: CPF Board 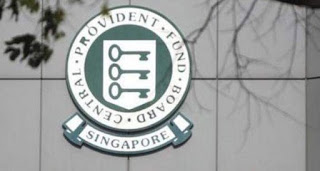 Since 15 January, you might have seen a post circulating on Facebook and WhatsApp that the Government had quietly shifted the Central Provident Fund (CPF) Retirement Payout age from 65 to 70.

However, the message circulating online is false and the payout eligibility age for the Retirement Sum Scheme is indeed 65 for those born from 1954 onwards, and this had not changed since it was announced in 2007, said CPF Board on Saturday (19 January).

The confusion happened due to a letter CPF sent to its members who are approaching their eligible payout age. 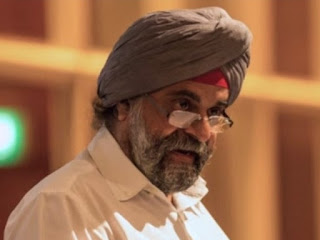 Former ruling party parliamentarian, Inderjit Singh, has joined the voices of Singaporeans urging the Central Provident Fund (CPF) Board to change its automatic withdrawal age from 70 to 65, which is the retirement age in Singapore.

Last week, a picture of a letter sent by CPF Board to a senior citizen went viral online. The letter informed the 65-year-old member that he can receive higher payouts if he delays the start of his payouts and even states that he would only start receiving payouts when he turns 70, automatically by default, if he does not do anything.

Some netizens responding to the picture believed that the authorities have shifted the “retirement payout age” to 70. Clarifying that this isn’t true, CPF Board said in a statement that the Payout Eligibility Age (PEA) is 65. 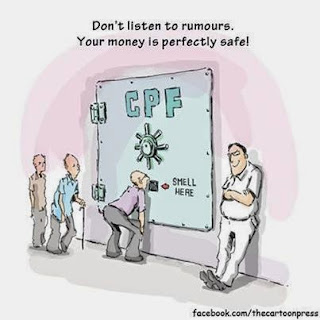 related:
Josephine Teo: CPF Board can do better
CPF: "The gift that keeps on giving"