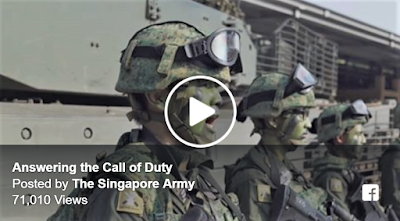 Answering the Call of Duty

The Republic of Singapore Navy

Five fighter squadrons from the RSAF reported to their air bases

Fighter squadron servicemen, including pilots & ground crew, reported to their air bases on Sunday (Dec 9), as part of a regular mobilisation exercise held to validate the units' operational readiness.

The mobilisation, launched at noon, saw active & operationally ready national servicemen (NSmen) from 5 of the Republic of Singapore Air Force's (RSAF) fighter squadrons reporting to Changi Air Base, Paya Lebar Air Base & Tengah Air Base within hours of the activation.

The Ministry of Defence said the Singapore Armed Forces holds between 20 & 30 mobilisation and equipping exercises every year, which involve units from the Singapore Army & the Republic of Singapore Navy as well.

The Singapore Armed Forces (SAF) will be conducting military exercises across Singapore next week, including live-firing exercises by the army & the air force.

In a statement on Friday (Dec 7), the Ministry of Defence (Mindef) revealed these plans & advised the public not to be alarmed and to keep clear of the exercise areas. Mindef makes this routine announcement of SAF exercises on a weekly basis.

The army will conduct live-firing exercises in Pasir Laba (Safti) Live Firing Area from next Monday, 8am, to the following Monday (Dec 17), 8am. Live ammunition and flares will be used. Sea vessels and crafts sailing through the Western Johor Straits during this period are to keep within the 75m Navigable Sea Lane and not to stray into the Live Firing Boundary. 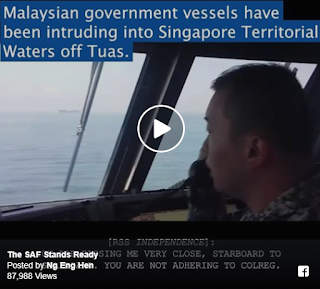 For 20 years or more, the Republic of Singapore Navy and Police Coast Guard ships have patrolled our Singapore Territorial Waters at Tuas. Out of nowhere, Malaysian Government vessels now claim these waters as theirs and have been continually intruding since November.

These are serious violations of Singapore's sovereignty. Our security forces have acted with restraint despite continuing intrusions and provocations. Singaporeans are peace-loving, but I strongly caution violators to leave Singapore territorial waters. 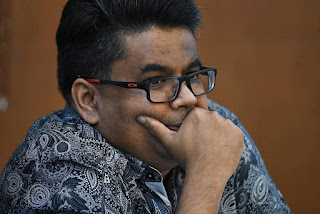 Dr Rais Hussin, who heads Parti Pribumi Bersatu Malaysia’s policy & strategy bureau, said that there is “nothing to gain by issuing threats to interdict Malaysian ships in Malaysian or Singaporean waters. What they will get is only pain by a thousand cuts”.

A supreme council member of Malaysian Prime Minister Mahathir Mohamad’s party, Parti Pribumi Bersatu Malaysia (PPBM), has said that Singapore will get "pain by a thousand cuts” for its position on the maritime dispute with Malaysia.

Dr Rais Hussin, who heads PPBM’s policy & strategy bureau, added that the Republic will gain nothing "by hardening its stance" against its neighbour.

Writing in a commentary published on the Malaysiakini & Malay Mail websites on Sunday (Dec 9), Dr Rais said that Singapore needs to “smarten up” & “live and let live”.

Singapore gains nothing with harder stance against KL in dispute, says PPBM strategist 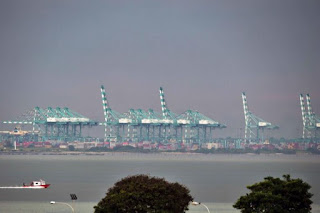 "All put, there is nothing that Singapore can gain by hardening its stance against Malaysia" in issues such as maritime boundaries.

"It helps not to turn a spat into a spar, which repeated often enough, can be a bone spur that presses against the spinal chord of both countries.

"Then what? Fight & tear at each other's faces? Singapore & Malaysia both know that wars are meant to make an orphan of all children of their respective populations," he wrote in a piece in English carried in the Malay Mail & Malaysiakini.

Even though a supreme council member of Malaysian Prime Minister Tun Dr. Mahathir bin Mohamad’s party, has said that Singapore will get “pain by a thousand cuts” for its position on the maritime dispute with Malaysia, Ho Ching has replied rather coolly on Facebook.

The Chief Executive Officer of Temasek Holdings and Prime Minister Lee Hsien Loong’s wife took on Dr Rais Hussin, who is the head of Parti Pribumi Bersatu Malaysia’s (PPBM) policy and strategy bureau. Dr Rais said that said that Singapore will get “pain by a thousand cuts” for its position on the maritime dispute with Malaysia, and that the Republic will gain nothing “by hardening its stance” against its neighbour.

In response, Ho Ching shared an article by TODAY, and casually remarked, “Chill, man”. This was rather unusual as while the head of Temasek is very active on the social media platform, she rarely adds comments to the posts she shares.

Malaysia will be responsible for ‘any untoward situations’, says Singapore, as it repeats call for KL to withdraw vessels 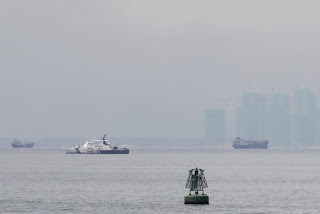 Malaysia will be responsible for “any untoward situations on the ground” that arise from continued deployment of its vessels in the waters off Tuas, Singapore’s Ministry of Foreign Affairs (MFA) said on Monday (Dec 10). It also said that Singapore reiterates its call for its neighbour to revert to the status quo prior to Oct 25.

While officials from the 2 countries are due to meet in the second week of January to discuss the maritime dispute, the MFA said that the vessel deployments in the area “will not strengthen its legal claim & can only heighten tensions”.

The ministry noted that Malaysian government vessels had entered into Singapore’s territorial waters off Tuas after Kuala Lumpur published a declaration on the alteration of Johor Baru port limits on Oct 25. 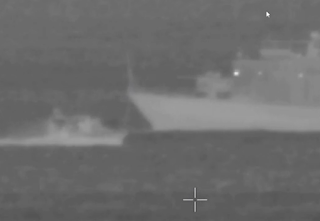 On Friday (7 December), Singapore’s Minister for Home Affairs and Minister for Law K Shanmugam and Attorney-General Lucien Wong met with the Malaysian Attorney General Tommy Thomas to discuss these and other issues. The Singapore officials proposed a return to the status quo before 25 October without prejudice to Malaysia’s and Singapore’s respective positions on the maritime boundary between the two countries in the area which Malaysia claims. “Maritime boundary claims can be made under international law, in accordance with established procedures, without needing to have ships facing off against one another,” MFA said.

Hence, Singapore is “disappointed” that the Malaysian government issued a statement earlier Monday to reject Singapore’s proposal to return to the pre-25 October situation. A return to the status quo ante will avoid misunderstandings and potential issues on the ground, MFA added. “Malaysia’s deployments in this area will not strengthen its legal claim and can only heighten tensions. Malaysia will be responsible for any untoward situations on the ground that arise from continued deployment of its vessels into this area.”

Transport Minister Anthony Loke has dismissed Singapore’s claims of encroachment in the extension of the Johor Baru port’s limits, saying they are well within Malaysia waters. – The Malaysian Insight file pic, December 8, 2018.

Singapore’s Trade and Industry Minister Chan Chun Sing is the latest to weigh in on the maritime boundary dispute with Malaysia, warning of the risk of accidents and further “escalation” given the close proximity of vessels of both countries in disputed waters, Chanel NewsAsia reports.

“We urge all parties to revert to the pre-October 25 status quo ante for things to come down. And there are ways to do this under international law without prejudice to Malaysia,” Chan was quoted as saying in a media conference.

Dr M: Our vessels will remain for now 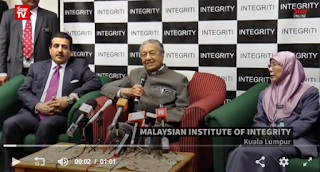 Malaysian vessels will remain in the disputed maritime border between Malaysia and Singapore off Tuas until a decision has been reached on the negotiations between both coun­tries, says Prime Minister Tun Dr Maha­thir Mohamad.

He said vessels from both countries were in the area at pre­sent as discussions between Malay­sia and Singapore were ongoing. “At the moment, because there is no decision, the vessels are there.

Malaysian vessels to remain in disputed waters as talks go on: Dr M 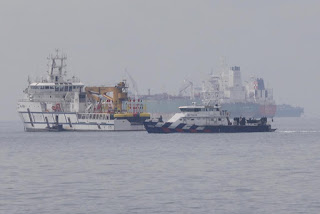 The S'pore Govt said that ships from Malaysia, including vessels from the Malaysian Maritime Enforcement Agency & Marine Department Malaysia, have made 14 intrusions into Spore’s territorial waters since Oct 25

Malaysia will be keeping its vessels in the waters off Tuas, the country’s prime minister Mahathir Mohamad said on Monday (Dec 10), while it continues talks with Singapore over their maritime dispute. 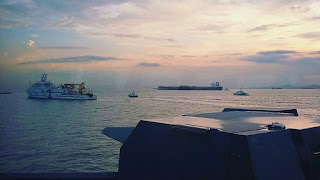 Singapore is "disappointed" that Malaysia is unable to accede to Singapore’s proposal to return to the status quo before it extended the Johor Bahru port limits, said the Ministry of Foreign Affairs (MFA) on Mon (Dec 10) in response to its Malaysian counterpart's statement earlier this evening.

Singapore also reiterated its call to Malaysia to revert to the status quo prior to the extension of Johor Bahru port limits before Oct 25, saying that this will "avoid misunderstandings & potential issues on the ground".

"Malaysia's deployments in this area will not strengthen its legal claim & can only heighten tensions," said MFA. "Malaysia will be responsible for any untoward situations on the ground that arise from continued deployment of its vessels into this area." 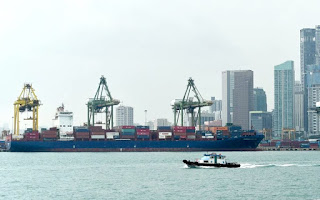 Singapore today warned that it would not hesitate to take firm actions against “intrusions” by Malaysian vessels into its waters.

And in a tit-for-tat move, the island republic said it had decided to extend the Singapore Port Limits off Tuas. This extension, it said, was well within Singapore’s territorial waters and that the gazette took effect today. The extension tracks the eastern boundary of the 1999 Johor Bahru Port Limits.

Singapore Coordinating Minister for Infrastructure and the Minister for Transport Khaw Boon Wan said while the country upheld international law and respected bilateral agreements, “we will protect and defend Singapore’s territorial sovereignty”.

Malaysia and Singapore dispute over air and sea boundaries 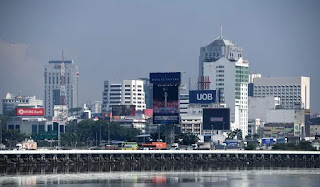 A radar system in the Lion City that will bring low-flying jets over Johor has rattled Kuala Lumpur. But the city state says its northern neighbour has repeatedly intruded into Singaporean waters

Relatively balmy ties between Malaysia and Singapore on Tuesday took a turn for the worse as the two neighbours bristled at each other for purportedly violating each other’s air and sea boundaries, rekindling memories of now-resolved disputes over similar issues decades earlier.

The development was the first major low point in the bilateral relationship since the May election in which former prime minister Najib Razak, often viewed as friendly to Singapore, was ousted. His successor, 93-year-old Mahathir Mohamad, who is serving a second stint as premier, is perceived by foreign policy observers on both sides as being hawkish towards the Lion City. One Malaysian analyst told This Week in Asia the veteran politician might be using Singapore as an external bogeyman as domestic pressure intensifies for his new government.

Tuesday’s salvo of accusation and counter-accusation was kicked off by Malaysia’s Transport Minister Anthony Loke, as he told parliament in the morning that the government was angered by the Lion City’s unilateral decision to broadcast a new radar system in its secondary civilian airport. 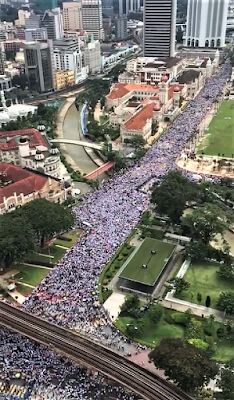 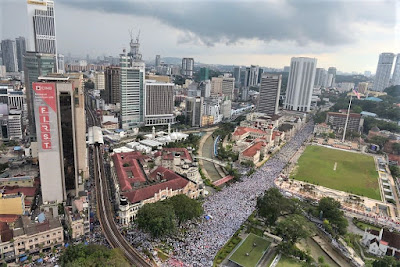 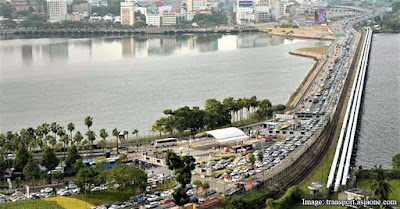 Imagine if it was at the Singapore-Johor Causeway at Woodlands 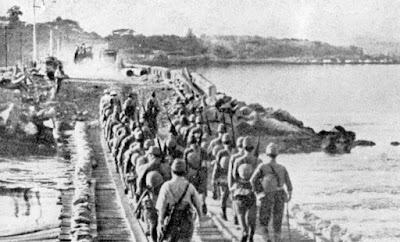 13,000 Japanese troops crossed the Johor Straits into Singapore in collapsible boats. The next day, Japanese Imperial Guards crossed a repaired Causeway into Kranji

The 'Dr Mahathir-Activists KL Meeting' Saga
In perverse fashion, the Malaysians might have done PAP a favour

Dawn of a new era, in our own backyard!
The protege toppled by his mentor
Can Singapore “Do a Malaysia”?
Why Singapore needs Mega Ports?
Posted by Under The Angsana Tree at 20:40