Where sleaze and food coexist

Sleaze comes to Clarke Quay: Take me home for $200 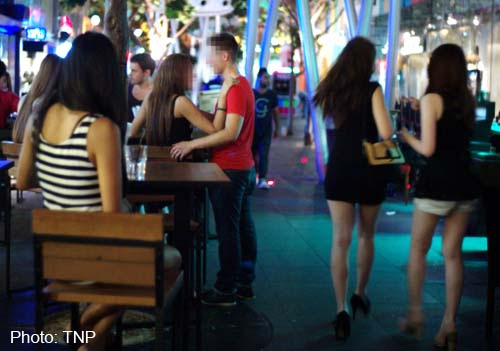 Last Saturday, dozens of scantily-clad women - believed to be Filipino and Vietnamese - on the prowl outside clubs at Clarke Quay after midnight, targetting Caucasian patrons

They pull you by your arms and flirt openly with you. Some even ask if you can take them home for some "fun".

The flesh trade that earned Orchard Towers the unfortunate tag "Four Floors of Whores" appears to have moved to Clarke Quay recently.

Patrons have complained to The New Paper that transgender sex workers and scantily-clad women on social visit passes aggressively grab them, clamouring for business. Their target: Mostly Caucasians

One of them said she charges $200 an hour 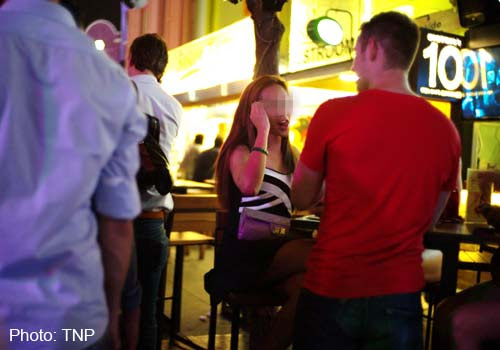 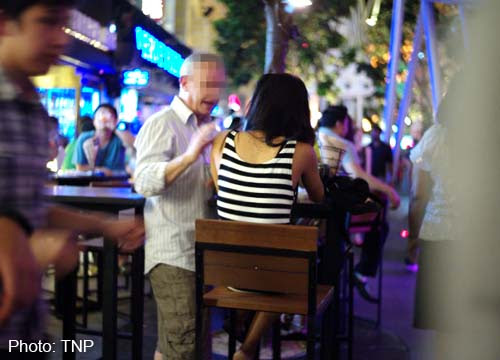 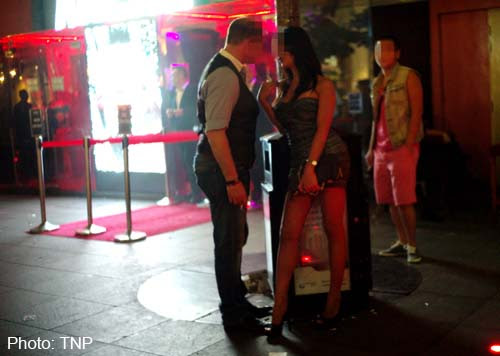 I've also noticed many strange women at Clarke Quay recently ..but I'm not ang moh mah, so they won't talk to me.

They did talk to some super drunk expats in front of me in the taxi queue though. I think one went home with one of them.

But does it really bother anyone? I mean.. it's not like it's Orchard Towers. That one is really super dirty looking.

68 arrested for vice-related activities in police raid in Orchard

A six-hour operation in Orchard over two days ended with 68 individuals arrested for suspected involvement in vice activities, the police said in a release on Wednesday.

The arrests were carried out at nine public entertainment outlets and at an office in the vicinity of Orchard Road.

She's my wife not a prostitute

I'm not a prostitute. That was what she told the tattooed man who approached her at Lorong 23 in Geylang last Saturday.

He had mistaken her for a prostitute and wanted her off "his territory".

"He ran towards me aggressively and looked like he wanted to hit me," said Madam Liu Ya Hui, 50, a Chinese national. Madam Liu had stepped out of a taxi to go to a UOB bank there at around 4pm.

Common to be mistaken for sex worker

She works in Geylang, but it's not what you think.

Ms Amelia Choon, 33, is the operations manager of Karma Kagyud Buddhist Centre, at Geylang Lorong 22. Having worked there for a few years, she's used to having men staring at her.

"Usually, these men don't really say anything. They just stare at your body, like they are sizing you up," she said. "It's very creepy."

A midnight stroll through Geylang can be a surreal experience

Freelancer sex workers, believed to be Thai, standing by outside Westerhout Road

Go after the heavens have opened and the rain-slicked pavements become kaleidoscopes of colour as they reflect the areas' ubiquitous neon. On any given night, the notorious red-light district has more colours on show, giving the area an almost alien aura. The oddities don't stop there.

The always busy Geylang Road is possibly the only place on this island where you can experience bumper-to-bumper traffic at 1am. Perhaps the drivers are distracted by the garish lights, screaming for attention from the sex shops and budget hotels.

"But as my husband said, the best food in Singapore is always located in the weirdest places!"

Officers from the Criminal Investigation Department (CID) on Wednesday arrested nine men and 34 women during a crackdown on a vice syndicate operating in Geylang.

Police said in a news release that those arrested were aged between 18 and 65, and they were nabbed at a terrace house in Joo Chiat.

Police seized the syndicate's records, several SIM cards, and about S$50,000 in Singapore and foreign currencies.

He was due in court on Wednesday for allegedly having sex with an underage prostitute.

But Mr Payton Scott Velo, 44, spent the wee hours of Wednesday perched on the roof of a five-storey Telok Kurau condominium, stark naked and threatening to commit suicide.

After a stand-off that lasted about five hours, the American was persuaded to come down. He was then arrested by the police.

In an eight hour operation involving officers from Bedok Police Division and the Criminal Investigation Department (CID), enforcement checks were carried out at public entertainment outlets in Geylang.

During the operation, 46 suspects - comprising of 45 female foreigners and one male foreigner - were arrested for unlawful employment offences.

The ages of those arrested ranged between 18 and 30.
read more

Joanne Peh gets up close to sex workers

Clutching her handbag to her chest, she was at a loss for words

Sweat trickled down her heavily made-up face as a policewoman ordered her to sit on the ground.
The slim, tan-complexioned woman, who looked to be in her early 30s, was dressed in a tight sleeveless top and a skimpy pair of shorts that barely covered her bottom.

She shot the policewoman an anguished look. However, she had no choice but to obey.

Had she been Singaporean, she might have recognised two familiar faces among a group of about 10 police officers at Lorong 24 Geylang in the early hours of Saturday

Others may tell you that is where men visit their mistresses on weekends. This perception has long been fuelled by news reports of retirees blowing their CPF money on the Indonesian island, which is just 45 minutes from Singapore.

A survey by a Batam non-governmental organisation in 2003 showed that about 600 Singaporean men visit Batam for sex every Saturday.

Is this still so today? You will be surprised. Now, it seems the island's reputation as a seedy getaway is fading. Reasons: Singapore getting two integrated resorts with casinos and a change in CPF rules.

Two jailed for having paid sex with girl, 16

Two men were each jailed for 12 weeks on Wednesday for having paid sex with a 16-year-old student in an online vice-ring case.

Former port inspector and police officer Alvin Chen Zi You, 32, - formerly known as Tan Zi Yu - and bellhop Muhammad Ibrahim, 24, were among 10 men charged with commercial sex with the girl. A third man, technician Muhammad Sufyan Misbari, 31, will have his case mentioned on Thursday after indicating that he wished to plead guilty too.

A total of 50 persons were arrested in Police Operations targeting four public entertainment outlets from 4 June 2013 to 7 June 2013.

The Operations, led by from Bedok Police Division, carried out enforcement checks at four public entertainment outlets located along Joo Chiat Road and Geylang. A total of 50 persons, comprising of 49 female foreigners and 1 male foreigner aged between 18 and 37, were arrested for unlawful employment offences. Police also issued summons under the Public Entertainment Meeting Act to all the four entertainment outlets.

This is part of ongoing Police enforcement efforts to clamp down on criminal activities at entertainment outlets and serves as a warning that those who conduct such illicit activities will be dealt with in accordance with the law.

Neighbours move out, pimps move in

It's about a five-minute walk to the MRT stations, a 10-minute drive into the city and with good food all day, all night.

But there's a catch - it's in Geylang. Until about 10 years ago, streetwalkers limited their trade to Lorongs 18, 16 and 14. That's a five-minute walk away.

Mr Tan Kok Keong, OrangeTee's head of research and consultancy, said some of the properties within the red-light district are currently going for $750 per sq ft (psf)

Those in the outskirts almost double this price.

There were Indonesian and Filipina maids with their Bangladeshi boyfriends, Chinese nationals and their scantily-dressed female compatriots, and the occasional Myanmar couple. And yes, there were local couples too.

The New Paper spoke to some domestic helpers and foreign workers there on their day off.


"Got room?" he asked the receptionist, who shook his head and replied: "No room. Fully booked." But the receptionist quickly added: "You can come back later. One hour's time."

The New Paper team caught up with the couple on their way out. We were there yesterday to observe the hotels' thriving business on Sundays, which is supported largely by migrant worker couples who have found love here.

For years, the relationship between mother and daughter was strained


Miss Rezzilyn Lodia Vinegas, 33, refused to accept her mother's opinion about her live-in partner.
Her mother, Mrs Matilde Lodia Vinegas, didn't think much of him.

But eventually, rumours started to surface about the man, like how he was spotted with another woman, and how he was allegedly already married when he started dating Miss Vinegas.

Miss Vinegas, who was by then working in Singapore, saw the truth in her mother's criticisms and they eventually reconciled earlier this year.
read more

related:
Geylang Isn’t What It Used to Be
Geylang, the final frontier
An Undercurrent Of Fear In Geylang
Where sleaze and food coexist
Sex in the city drags you down
Women, Sex and Singapore
Police raids massage parlours & public entertainment outlets
Posted by Under The Angsana Tree at 08:48