The Lantern Festival, also known as the Yuan Xiao Jie or Chap Goh Meh is a festival celebrated on the fifteenth day of the first month in the lunisolar year in the lunar calendar. It marks the last day of the lunisolar lunar New Year celebration. This is not to be confused with the Mid-Autumn Festival (traditional Chinese: 中秋節; simplified Chinese: 中秋节; pinyin: zhōngqiū jié), which is sometimes also known as the "Lantern Festival".

In ancient times, the lanterns were fairly simple, and only the emperor and noblemen had large ornate ones. In modern times, lanterns have been being embellished with many complex designs. For example, lanterns are now often made in shapes of animals. The lanterns can symbolize the people letting go of their past selves and getting a new one, which they will let go of the next year. 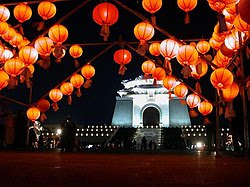 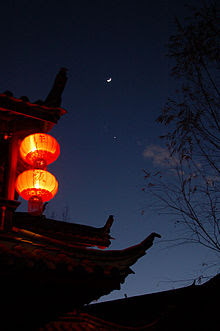 Chap Goh Mei, simply means "the 15th night of Chinese New Year" and is celebrated by eating grand meals with families and relatives. Prayers are conducted and offerings are made in conjunction with the festival.

Most families give offerings to the deities in the form of candles and joss sticks, which flicker in the wind. Houses are decorated with red lanterns. and bright lights to mark the end of an auspicious occasion. In temples, thanksgivings are held while many people would be asking for the God of Prosperity to endow them with success and wealth for the coming year.

According to Chinese tradition, at the start of a new year, when there is a bright full moon shining at night, there should be thousands of colourful lanterns hung out for people to appreciate. Children will go out at night to temples carrying paper lanterns, and solving riddles posted on them. The Chinese will also enjoy a nice family reunion and eat Yuanxiao (glutinous rice ball), a dish associated with Chap Goh Mei. There would also be many festive activities such as lion dance and other unique cultural performances, lantern displays, lion dances and the famous Chingay (flag-balancing) procession.

Chap Goh Mei is an exciting event for young women. It is widely celebrated by youngsters, who look forward to it every year. On a legendary point of view, Chap Goh Mei is regarded as the Chinese Valentine's Day. It brings forth lots of fun and gaiety. It is well-known that Chap Goh Mei is a night of courtship and has since been the forerunner in promoting match-making. On this night, many young ladies would make their way to the temples, dressed in their best, with hope of finding prospective suitors.

On this particular night, young women will dress up and go out for the purpose of finding a suitable life partner. The unique thing is that women will carry mandarin oranges, on which they write their names and phone number. Then they would throw it in a pond or bury it somewhere, a traditional act that signifies that the lady is available for marriage.

One of the fun activities that take place on this auspicious night includes the throwing of oranges into the sea by these young maidens. It is without a doubt, the most popular and colorful moment in the history of Chap Goh Mei. It is believed that by throwing tangerines into the sea, these young girls would find themselves a good husband.

For many, the act of throwing tangerines into the sea also signifies that these women are available for marriage. It is also said that if someone else who sees the floating tangerine in the water and picked it up, that generally means that the single who threw it would be able to find a good spouse.

Another story of the Chinese Valentine's Day also states that this is the only day in the whole year that young maidens are allowed to stroll the streets. However, they must be accompanied by a chaperon. Knowing this fact, many young men would gather around with hope of catching glimpses of these lovely maidens.

According to the legend, there will be a matchmaker from the moon who would tie red strings of destiny on their legs. As a result, the couple will end up being together.

Although "young maidens" flock the streets freely these days thus the matchmaker from moon is not exactly needed anymore, yet the tradition of throwing tangerines into the sea still prevails.

While many no longer believe in the legend, yet it is still a fun thing to do or observe. Sadly, not many people in the big cities are practicing this custom anymore. However, the tradition prevails nonetheless.

Lantern Festival, also known as Yuan Xiao Festival or Shang Yuan Festival, falls on the 15th day of the 1st lunar month. For Chinese, it is a festival of great significance that is widely celebrated by families all around China.

The festival has a long history in China which can date back to the Western Han Dynasty (206 BC-AD 25). There are many different versions about the origin of the Lantern Festival. But it is believed that it had something to do with religious worship.

In the daytime of that day, people have the chance to appreciate wonderful performances such as lion dances, dragon lantern dances, yangge dances, etc. At night, most families will let off fireworks. But the main attraction on that day is the lanterns. Decorative lanterns depicting animals, flowers, historical figures are found everywhere. People may also participate in the game which is called Guessing Lantern Riddles

Another important part of the festival is eating Yuanxiao or Tangyuan, small dumpling balls made of glutinous rice flour. Nowadays, the custom of eating Yuanxiao still remains

read more
Posted by Under The Angsana Tree at 14:48