Singapore's Parliament is set to debate the Finance Minister's 2013 Budget statement from Tuesday, and thereafter the Budget allocations for the various ministries.

The Government Parliament Committees (GPCs) have been discussing the key issues which Members of Parliament intend to raise during the Committee of Supply.

Some of the topics on the cards include a call for the return of dual-key HDB flats to promote togetherness within multi-generational families, measures to address the income gap, reducing stress in schools and allowing students to have their holidays without tests and assignments. 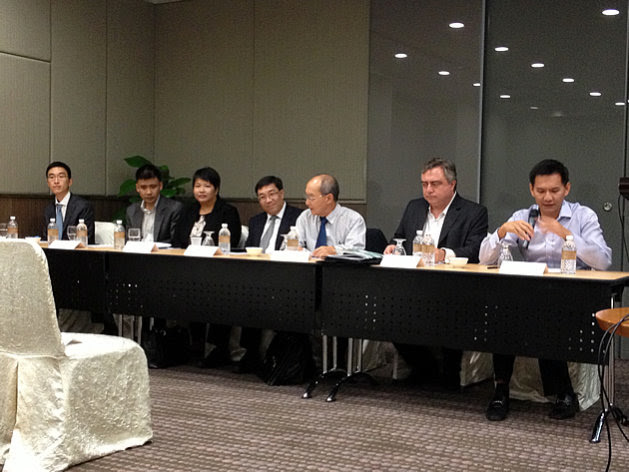 Economists and finance analysts on Thursday evening questioned the extent of the progressiveness of government’s proposed budget, noting that there was still a lot more room to increase tax rates for high-earners, in particular.

A panel made up of four economists, two finance experts and a tax partner, including forum moderator Donald Low, shared their views at a forum organised by the Economic Society of Singapore on Thursday, with several also expressing doubts over the potential effectiveness of measures to improve labour productivity and help lower-income workers.

OCBC Bank’s head of treasury, research and strategy Selena Ling described the government’s efforts at making Singapore’s tax system more progressive as “tinkering at the margins”, noting through charts that the country’s fiscal surplus has for several years been larger than projected.

How progressive is the new tax structure? 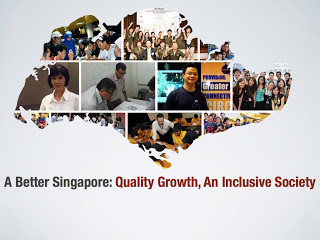 Budget 2013 sees the introduction of wealth taxes on luxury cars and homes. The tax system is getting more progressive, but the Government also has to increase social spending and transfers to reduce the income gap

As an open economy, Singapore has to strike a balance between maintaining international tax competitiveness and achieving domestic equity in its fiscal policy. Budget 2013 thus aims for "quality growth and an inclusive society".

As the income gap has inched up, fiscal policy is one tool to narrow that gap. Narrowing the income gap is done at both ends: targeting the low- to middle-income worker by redistributing income, and lowering disposable incomes at the higher end by taxing higher incomes and wealth.

Quality growth and an inclusive society has been outlined as key themes in the Budget 2013. Here are the key points in brief, delivered earlier in Parliament on Monday by Deputy Prime Minister and Finance Minister Tharman Shanmugaratnam, released in a statement by the Ministry of Finance

We are transforming our economy so that we can have quality growth - growth that will provide all Singaporeans a better quality of life.

And we are taking further steps towards a more inclusive society - starting with our children, helping lower-income workers, and providing better lives for our retirees.

A Straits Times' panel of critics assessing this year's Budget in an online special on Monday described it as balanced, focused on helping the needy and addressing the income gap, even as it seeks to restructure the economy.

Said KPMG tax partner Chiu Wu Hong: "This is a balanced Budget. It reinforces the message that the country has to push ahead with economic restructuring and with the initiatives to address higher healthcare costs and cost of living."

Mr Chiu was on the panel of five experts in The Straits Times newsroom giving their views as Deputy Prime Minister and Finance Minister Tharman Shanmugaratnam delivered the Budget.

While the 2013 Budget attempts to address systemic problems that ail the nation, it continues to fall short, as with past Budgets, of addressing what Singapore really needs.

The SDP welcomes Finance Minister Tharman Shanmugaratnam's acknowledgment of the income disparity in Singapore and his effort to tackle the problem through the Wage Credit Scheme (WCS). We note, however, that the Scheme is similar to the Workfare Income Scheme (WIS) in that it pays out to employers to raise wages of workers.

The WIS has shown not to be helpful in achieving its objectives as income inequality in Singapore continues to widen despite it having been in effect since 2007. The Gini coefficient has risen in the last few years and continued to worsen in 2012 (from 0.473 in 2011 to 0.478 in 2012).

The worst idea in Budget 2013 analysed

Just as well Chan Chun Sing provided me the threads I could grasp to quickly think through this worst idea of Budget 2013. Saves me time

It is always a good idea to give those at the bottom of socioeconomic pile a leg up not with the providing welfare but enabling them to join the middle class or better. We keep doing this for the bottom 10 or 20% and so across the board we keep getting better with each iteration.

It is a truly terrible idea to offer welfare to the middle class. Something is terribly wrong with our economy management when the bulk of the population need help. The government has been taking away too much money.

Singapore’s government hopes that new subsidies for low-wage workers will fix two problems: pressure on company profits, and income inequality. But in doing so, it will just create new problems later on.

The government has offered to reimburse private employers as much as 40 percent of future pay increases for Singaporean nationals who earn below S$4,000 a month. The S$3.6 billion, three-year plan is equivalent to 1 percent of the city-state’s annual GDP. The idea is to lend a hand to struggling employers who are finding it hard to fund pay rises, because of increased rents and curbs on hiring cheaper foreign labour. It should also please local workers, who complain that foreign hiring has kept wages down in the past.

In an economy already at full employment, there is little doubt that the subsidy will get used. The tight labour market means employees have strong negotiating leverage. And the benefits will be widespread. About 1.3 million people out of a total employed resident population of 2 million earn less than S$4,000. While that figure doesn’t sound much for such a prosperous country, a household with two such earners can be considered middle class.

This year’s government budget will be best remembered by a new spending, known as the Wage Credit Scheme (WCS). $3.6 billion is set aside for this scheme to cover 3 years of use of this fund.

“Under the WCS, the Government will co-fund 40% of wage increases given to Singaporean employees earning a gross monthly wage of up to $4,000. Wage increases that are given in 2013 to 2015 will be eligible for WCS.”

Hong Kong is unlikely to follow Singapore's example by raising taxes for owners of the most expensive luxury homes, property and tax experts say.

The city-state's initiative is seen as being aimed less at cooling the market than at taxing the wealthy as part of efforts to reduce the income gap.

"Hong Kong's private housing market is a lot bigger than that of Singapore, and many people could be affected if the Hong Kong government follows suit," said Jennifer Wong, a tax partner at KPMG China.

To further curb hiring of unskilled foreigners, the $650 levy for every worker beyond the approved number for a building project has been upped to $950. Has Armageddon been averted? Or are the pruning measures too late in the implementation?

In "Dubai, The Story of the World's Fastest City" author Jim Krane writes that 95% of Dubaians are foreigners, and there were only about 100,000 citizens among the city's 2 million inhabitants in 2009. But swarming immigration extends beyond Dubai, and has left Emrati citizens a minority in every one of the United Arab Emirates' seven emirates (Dubai, Abu Dhabi, Sharjah, Ajman,Umm Al-Quwain, Fujairah and Ras Al-Khaimah).

The million or so UAE citizens make up about 15% of the country's total population of around 6 million. In the UAE, citizenship is guarded "like a vault of nuclear fuel rods". Residents who never took nationality after 1971 have no citizenship at all. That's one way to maintain the nationality core.

The Republic of Singapore has set aside a record S$12.3 billion for the Ministry of Defence/Singapore Armed Forces, according to the Budget Statement released this afternoon.

Budget 2013: The end of employment woes?

As expected, the 2013 budget covers the much-debated issue of the influx of foreign workers in the country.

Indeed, the debate which has opposed those that are worried about their rice bowls being taken away by foreign workers to those seeing measures such as the recent population white paper as “xenophobic” has some  very high stakes and needs urgent attention.

Acknowledging the fact that “foreign workers now comprise 33.6% of [the] total workforce”, Deputy Prime Minister and Finance Minister Tharman Shanmugaratnam assured Singaporeans that Singapore’s policies will remain guided by the objective of moderating the growth of the foreign workforce and only relying on it when the country has “major infrastructural projects under way,as is the case currently”.

Singapore has broken new ground with a novel scheme to increase the wages of Singaporeans.

The government will bear 40 per cent of the pay hike for Singaporeans earning up to 4,000 Singapore dollars (over $3,200) a month. This should benefit at least half the Singaporean workers as they earn less than that. The gross monthly income from work of Singapore citizens and permanent residents working full-time was 3,480 Singapore dollars last year, according to the Ministry of Manpower.

The 3.6 billion Singapore dollar Wage Credit Scheme is to help Singaporeans cope with the rising cost of living and reduce the income gap.

Under the Budget 2013 measures announced on Monday, vehicle buyers will now have a maximum of five years instead of the original ten years to service their car loans. They would also have to foot a down payment of 40 per cent or more for a new vehicle. And apart from these two, there will be additional increase in registration fee for more expensive cars.

A highly possible move to curb to growing COE prices that has incurred the wrath of the common Singaporean folks. For instance, COE price for Caterogry A vehicles (1600cc and below) has since early Jan 2012, rose from S$46,889 to the recent COE pricing of S$78,301, with the highest reaching at S$92,100 in the 1st round of bidding in Jan 2013. (LTA link)

If someone were to purchase a car such as KIA’s Cerato forte (1591cc) with an Open Market Value (OMV) of S$12750* and taking the recent COE price announced on the 2nd round of bidding exercise for CAT A vehicles which went at S$78,301.  For simple calculation purpose, the individual would have to pay 40% of the total sum of COE and the OMW which comes to be S$36,420 and monthly loan for a 5 year period comes close to a thousand dollars.

The scheme is part of a three-year Transition Support Package to help companies restructure.

The government will co-fund 40 per cent of wage increases for Singaporean employees over the next three years. This will also apply to wage increases of those earning up to S$4,000 in gross monthly wage.

The wage credits will automatically be paid out to employers annually.