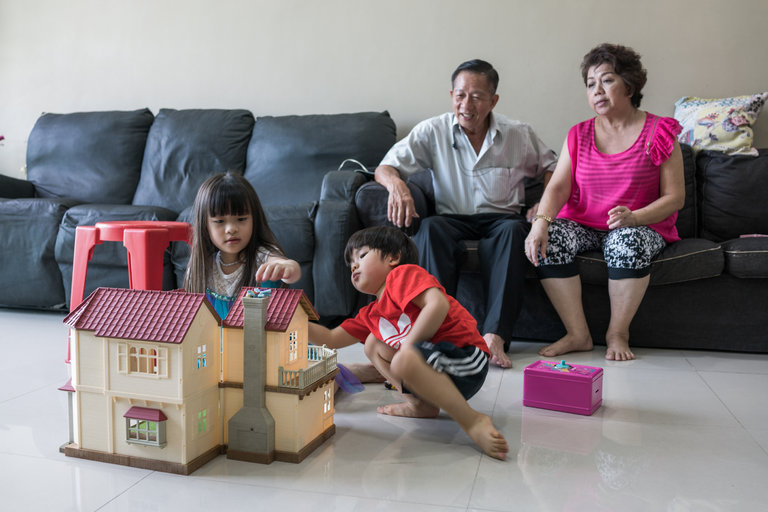 The Tok and Teo families are a model of traditional harmony, with three generations gathered under one roof, enjoying each other’s company over slices of fruit and cups of tea on a Saturday afternoon in Singapore. There is only one problem: The youngest and oldest generations can barely communicate with each other.

Lavell, 7, speaks fluent English and a smattering of Mandarin Chinese, while her grandmother, Law Ngoh Kiaw, prefers the Hokkien dialect of her ancestors’ home in southeastern China. That leaves grandmother and granddaughter looking together at a doll house on the floor, unable to exchange more than a few words. “She can’t speak our Hokkien,” Mrs. Law said with a sigh, “and doesn’t really want to speak Mandarin, either.”

This struggle to communicate within families is one of the painful effects of the Singapore government’s large-scale, decades-long effort at linguistic engineering.

Singapore's Ambassador to US rebuts NYT article on Chinese dialects

Singapore's Ambassador to the United States Ashok Kumar Mirpuri has taken issue with a New York Times (NYT) article on the Government's policy on the use of Chinese dialects in S'pore.

The article, titled "In Singapore, Chinese dialects revive after decades of restrictions", was published on Aug 26.

In it, author Ian Johnson wrote that "linguistic repression" by the Singapore Government has led to a "widespread sense of resentment", prompting "a softening" in the policy on dialects. 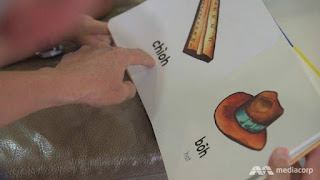 In the hallways of one of the science blocks, enthusiastic students like Ms Sarah Xing can be heard loudly chanting words like  “Yuht, ngee, sahm” – one, two, three in Cantonese – & bursting into laughter when someone gets the tones wrong. Which is frequently.

The 21-yr-old is one of 30 undergraduates from the Department of Pharmacy at the National University of Singapore (NUS) who signed up for a course in Cantonese. As a subject, it’s got nothing in common with their usual staple of cell biology, analytical chemistry and pharmaceutical analysis. It adds zero value to their grades.

But, these third-year students clearly think it important enough to make time in their hectic schedules for learning the Chinese dialect.

How about learning some dialect to bond with grandma?

When author & blogger Grace Tan first met her boyfriend’s grandmother, she found herself tongue-tied. It’s not because the 29-yr-old is shy; it’s because she couldn’t chat with the 85-yr-old as the latter speaks only Teochew. “It was ridiculously difficult to communicate with her as she doesn’t speak Mandarin. So while she understands while I’m trying to say in Mandarin, she can’t respond to me at all,” said Tan.

But these days, Tan is able to use some conversational Teochew greetings such as “How are you feeling?” & “What would you like to eat?” thanks to the Teochew classes she attended at a community centre. Her efforts have been reciprocated by the older lady who would laugh & correct her pronunciation. Naturally, they’ve gotten closer.

Tan’s Teochew class was organised by a student initiative My Father Tongue, set up by Fiona Seah, Melissa Goh & Cherie Lim from Nanyang Technological University’s Wee Kim Wee School of Communication and Information as part of their final year project. These free Hokkien, Teochew and Cantonese classes are held in community centres around Singapore in partnership with Viriya Community Services, which provides the teachers & learning materials. 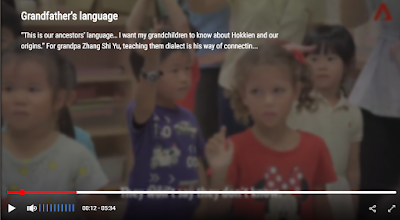 “This is our ancestors’ language… I want my grandchildren to know about Hokkien and our origins.” For grandpa Zhang Shi Yu, teaching them dialect is his way of connecting them with traditional Chinese culture and values.

Youth must learn dialects or risk losing part of their culture

Singapore has become more globalised over the years, & most younger Chinese Singaporeans are unable to speak their respective dialects — Teochew, Hokkien, Cantonese, Hakka, Hainanese & more — to their elders, such as their grandparents, who may speak primarily in dialect.

A gap between generations has thus formed. Though speaking one language as a society can help to build social cohesion and a more tightly knit community, it is important not to forget these dialects.

The new Hokkien drama Eat Already? was released on Sep 9, albeit aimed mainly at seniors, is an opportunity for the younger generation to get in touch with Hokkien.

In Singapore, Chinese languages other than Mandarin (pejoratively referred to as ‘dialects’ in official Singapore parlance) are banned on television under Part 12.4 of the Media Development Authority’s Free-to-Air Television Programme Code which states that “All Chinese programmes except operas or other programmes specifically approved by the Authority must be in Mandarin.”

Over the years, this policy has resulted several consequences: A declining interest and competency in Mandarin among young Chinese Singaporeans; erosion of the Singaporean Chinese identity and even the isolation of the pioneer generation. As such, we’ve called for the Media Development Authority to lift the ban on dialects on local television.

The main reason for marginalization of dialects was based on Former Prime Minister Lee Kuan Yew’s belief that the learning of dialects would interfere with one’s mastery of Mandarin, English and even “multiplication tables or formulas in mathematics, physics or chemistry”. Here are our arguments on why dialects should be reintroduced: 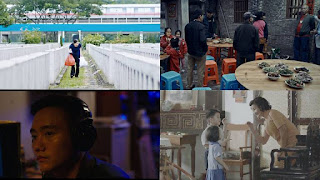 Singapore’s 1st ever dialect film anthology will be executive produced by local filmmaker Royston Tan, as part of the inaugural SCCC Cultural Extravaganza by the Singapore Chinese Cultural Centre which runs from May 20 to 27.

The main aim? To weave together the past and present as generations seek to understand, appreciate, preserve and pass on our heritage.

The Death of Dialects in Singapore

Singapore’s many Chinese dialects (Hokkien, Cantonese, Hakka etc.) came about as a result of early settlers arriving from various provinces in China.

In the 1950s & 60s, Singapore, like many de-colonised countries, began a search for an independent national identity. The Chinese in particular, turned to the cultural products of film and music from Hong Kong as a source of inspiration. The fascination with Hong Kong was also seen as a reactionary and feudal ‘Yellow Culture’ that was set out to oppose the ‘Red’ culture still apparent in Communist China.

Canto-pop in particular, boomed because of its apparent lack of censorship and ‘sexy songstress’, and made its way to the hearts of Singapore with popular Hong Kong singers taking centrestage at the Republic’s newly established culture centre, the National Theatre.

All ethnic Chinese Singaporeans are born to parents who belong to one of several dialect groups here. There isn’t any ‘formal’ schooling or training (as in formal lessons conducted in a classroom) wherein our children are taught to speak the dialect of his or her parents, grandparents, and elders. Rather, it is quite literally by word of mouth that from birth we are inducted, nurtured, taught and ‘immersed’ by our parents into the cultural mores, values and habits of our respective dialect groups. Meaning, this comes about very naturally especially and particularly between mother and child (hence, the real origin of the term ‘mother tongue’ to describe this intimate nurturing relationship. Regrettably the term has been quite brazenly hijacked by the MOE to describe the compulsory learning of Mandarin by all ethnic-Chinese Singaporeans).

In other words, dialects are the very essence of the conduit for the vital flow and direct transmission of our ancestors’ unique cultures, values, social and traditional mores, to descendants, in particular the younger generations. By extension and implication, the loss of the use of our dialects can therefore lead to an inexorable and irreversible dilution and eventual loss of our ethnic roots and cultural ballast over time. And on a timeline, after 30 years of govt sanctioned prohibition, I would say we are really almost on the precipice’s edge of dialects’ extinction – it is going the way of the dinosaurs.

So the corollary (i.e. consequence and conclusion) must be that without a living and functional use of dialects, it is almost impossible for our ancestors to ‘speak’ to us through our elders in the most intimate way possible.

Selling beauty of Teochew heritage with a pageant 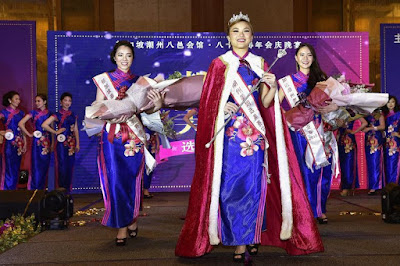 Last month, a group of beauty pageant finalists met their instructors for rehearsals.

But instead of learning to model swimwear, the 19 young women were drilled in Teochew phrases such as "leu hoh, wuo mia si..." (hello, my name is ... ), & the history and cuisine of the dialect group.

Singlish Reflects the Power of My People

Is the government’s war on Singlish finally over? Our wacky, singsong creole may seem like the poor cousin to the island’s four official languages, but years of state efforts to quash it have only made it flourish. Now even politicians and officials are using it.

Trending at the moment is “ownself check ownself,” which was popularized by Pritam Singh, a member of Parliament from the opposition Workers’ Party. He was mocking the ruling People’s Action Party (P.A.P.) for saying that the government was clean and honest enough to act as its own guardian.

Singlish is a patchwork patois of Singapore’s state languages — English, Malay, Mandarin and Tamil — as well as Hokkien, Cantonese, Bengali and a few other tongues. Its syntax is drawn partly from Chinese, partly from South Asian languages.

related: The Reality Behind Singlish

Kopi Siew Tai
Posted by Under The Angsana Tree at 00:18