Singapore Looks Below for More Room 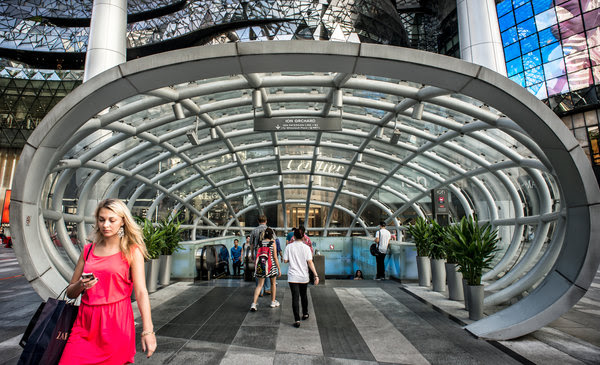 Much of ION Orchard, a mall in Singapore, is underground

Singapore, with a little less land mass than New York City, is running out of room for its 5.4 million people.

The city-state has built upward — with apartment buildings reaching as high as 70 stories — reclaimed underused properties for housing and pushed out coastlines for more usable land.

But as one of the world’s most crowded cities, and with projections for 1.5 million more people in the next 15 years, Singapore’s options are as limited as its space

related:
Singapore to Give Citizens Priority for Job Openings

Pedestrians crossing a road at Shenton Way on Aug 30 2013. Singapore's population grew at its slowest pace in nine years in the 12 months up to June 2013, even as the total fertility rate inched up, according to figures released by the National Population and Talent Division (NPTD) on Thursday. -- ST FILE PHOTO: ALPHONSUS CHERN

Singapore's population grew at its slowest pace in nine years in the 12 months up to June 2013, even as the total fertility rate inched up, according to figures released by the National Population and Talent Division (NPTD) on Thursday.

As of June, Singapore's population was 5.4 million, an increase of 1.6 per cent from a year ago. That is the slowest growth measured since 2004, which registered a growth of 1.3 per cent.

Prospective overseas Filipino workers eyeing work in Singapore were cautioned Tuesday against faking their credentials and qualifications, lest they face intensified prosecution by labor authorities there.

In a statement, Labor Secretary Rosalinda Baldoz said Singapore's Ministry of Manpower is cracking down on foreigners with forged qualifications or fake credentials.

"The Philippine Embassy (in Singapore) is reminding Filipinos applying for employment in Singapore to ensure that they submit proper academic credentials prior to employment," Baldoz said, citing the advisory from the Philippine Overseas Labor Office in Singapore under Labor Attache Vic Cabe.

Gold inched down this morning as the short term trend remains lower after the surprise and unusual price falls seen last Friday dampened renewed positivity after the ‘taper caper.’ Gold appears likely to test support at the $1,290/oz to $1,300/oz level again this week — possibly today or tomorrow when there is a COMEX futures option expiration.

Pavilion Energy Pte, the liquefied natural gas unit of Singapore’s state-owned investment company, wants to invest in Asian terminals and infrastructure to further its aim of supplying gas to the region.

Pavilion Energy, owned by Temasek Holdings Pte, will add more funds to its initial authorized capital of $1 billion to fulfill its ambitions, Chief Executive Officer Seah Moon Ming said at an LNG conference in Singapore today. He didn’t say how the company will raise the additional money.

“We will acquire assets across the full LNG value chain by building strong relationships with key partners, investing and co-investing in gas acreage, liquefaction plants and assets, shipping and regasification,” Seah said

Myanmar's Suu Kyi looks to Singapore as model - minus the materialism

Myanmar opposition leader Aung San Suu Kyi cemented Singapore's role as a major economic partner and model for her country on a five-day trip to the island, taking home what she said were valuable lessons on education policy and anti-graft measures.

But her endorsement of the wealthy city-state came with a caveat - Myanmar could do without the materialistic and high-pressure society that has accompanied Singapore's decades-long transformation from tropical backwater to economic powerhouse.

"I want to learn a lot from the standards that Singapore has been able to achieve, but I wonder whether we don't want something more for our country," the Nobel Peace laureate told reporters on Monday evening as she prepared to return home. 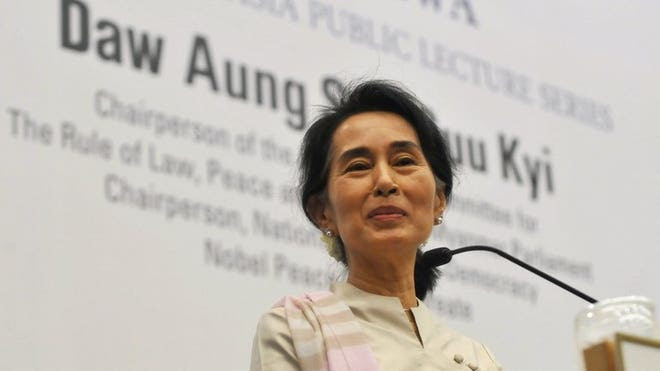 Nobel laureate Aung San Suu Kyi delivers a speech in Singapore, on September 22, 2013. Thousands of Myanmar nationals living in Singapore have given Suu Kyi an emotional welcome as the democracy icon urged them to consider coming home to help rebuild the impoverished nation. (AFP)

The two-hour event, held on the third day of opposition leader Suu Kyi's first visit to the city-state, saw Myanmar nationals working or studying in the wealthy city-state turn up in traditional attire and t-shirts emblazoned with her portrait to hear her speak and put questions.
The crowd, estimated at 5,800 by organisers Myanmar Club Singapore, gave Suu Kyi a prolonged standing ovation as she entered a convention hall

In a rare show of solidarity, six Singapore broadband players and a coalition of Asia-Pacific carriers have jointly opposed the proposed deal by SingTel-owned NetLink Trust to buy out the country's fiber network builder, OpenNet.

"If approved, the proposed consolidation would see SingTel becoming the 100 percent beneficial owner of the only other nationwide fixed telecommunications network in Singapore, apart from SingTel's own network," noted the joint media statement. The S$126 million acquisition of OpenNet was proposed last month promising "greater efficiencies" via integration with NetLink Trust, under the care of a trustee manager CityNet

Crackdown on illegal transport to Singapore

JOHOR BARU: Some factory and tour bus drivers here are allegedly making a quick buck by ferrying passengers into Singapore, despite not having the permit to do so.

It was understood that the driver would charge passengers between RM1 and RM2 each for bringing them to Woodlands in Singapore via the Customs, Immigration and Quarantine (CIQ) complex, here. The distance from the CIQ to Woodlands is about two kilometres.

It was also learned that this had been occurring daily, prompted by the fact that stage buses that start their service at 5am could not cater to the needs of some commuters who needed to get to Singapore to work as early as 3am

Does Singapore have what it takes to be Asia's Silicon Valley? And can it offer a conducive environment for local startups to thrive and drive innovation?

ZDNet asked these questions in an online dialogue featuring participants from the local startup and venture capital community:
Asked to describe the local startup scene, the participants said it was one that was still young and emerging. Lauria noted that it took generations to create an ecosystem like Silicon Valley in the U.S. and it would take time for Singapore's to reach a similar level of maturity. They also pointed to the oft-cited fear of failure among Asians and the preference to choose careers that were less risky.

Club One Seven Spa and Gym in Upper Circular Road, where Mr Yeo was found dead in a cubicle, is strictly for men only. -- ST PHOTO: KUA CHEE SIONG


A naked businessman found hanging at an all-male spa could have died as the result of a sex game that went wrong, a court heard yesterday.

Mr Yeo Hung Song may have been practising auto-erotic asphyxiation, which involves starving the brain of oxygen to increase sexual arousal.

But State Coroner Imran Abdul Hamid said that suicide was also a possibility. He added that the 48-year-old restaurant boss, who was not married, suffered from depression and was believed to have harboured suicidal tendencies.

read more
Posted by Under The Angsana Tree at 08:48