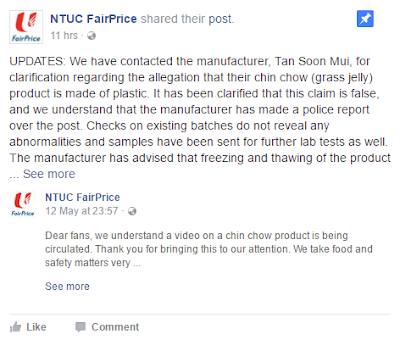 We have contacted the manufacturer, Tan Soon Mui, for clarification regarding the allegation that their chin chow (grass jelly) product is made of plastic. It has been clarified that this claim is false, and we understand that the manufacturer has made a police report over the post. Checks on existing batches do not reveal any abnormalities and samples have been sent for further lab tests as well. The manufacturer has advised that freezing and thawing of the product may affect the texture and consistency of the product.

Nonetheless, we had appealed for the creator of the video to contact us to aid in our investigations and to attain an actual sample of the product in question. We have yet to establish a connection with this customer. We advise the public not to circulate unfounded or unverified information which may cause unnecessary public alarm, and the manufacturer is currently working with the authorities on the matter.

We’d like to take the opportunity to also remind the public to be mindful of information spread on social media and messaging platforms, and encourage all to verify information directly with the source when in doubt. For clarifications, consumers may contact us directly at our Customer Relations Hotline at 6552 2722, through email at general.feedback@fairprice.com.sg or post a comment on our Facebook Page at www.facebook.com/thatsmyfairprice/. Thank you!

Grass jelly in viral video not made of plastic, manufacturer has made police report: NTUC FairPrice 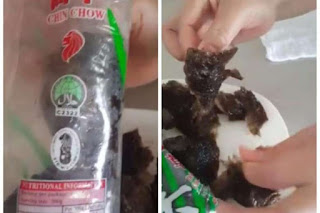 A claim that a locally manufactured grass jelly or chin chow product is made of plastic is false, supermarket chain NTUC FairPrice told The Straits Times on Monday (May 15).

A man identifying himself as Vincent Ng had said in a viral video circulating online that the Tan Soon Mui grass jelly he bought from FairPrice was "made of plastic".


The 1min 38sec video shows what appears to be dry, flaky grass jelly, instead of the usual smooth dark product.

Grass jelly in viral video not made of plastic, manufacturer made police report 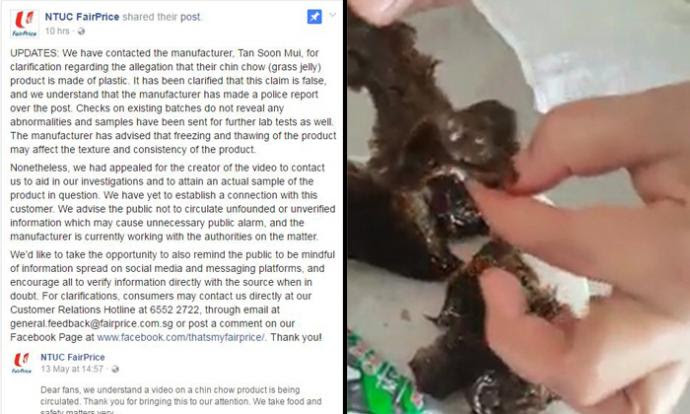 NTUC FairPrice has posted a response to a viral video on its Facebook page, stating that the manufacturer has clarified that grass jelly seen in the clip is not made of plastic.

The post is in response to a clip posted by Facebook user Sng Hock Huat, who said that the contents of a packet of Tan Soon Mui grass jelly he purchased at a Fairprice outlet felt sticky and plastic-like.

The clip was shared numerous times, with some netizens pointing out that YouTube user huppy huppy had uploaded a similar incident showing a packet of grass jelly that had contents that felt more like a sponge than chin chow.

Two netizens put up videos showing that the Chin Chow they bought from NTUC was inedible. One complained that there was plastic inside the Chin Chow.

Many netizens were angry and started whacking NTUC for selling sub standard food.

NTUC then released a statement on May 13 on their Facebook page, assuring customers that they are in contact with their supplier, and also appealing for the affected customer who created the video to get in touch.

A video was uploaded online of a woman claiming that the grass jelly from Tan Soon Mui Chin Chow is not edible.

In the video, she squeezes the grass jelly and it reacted just like a sponge.

While other netizens said ” If it was frozen in the freezer, this is absolutely normal. Duh”

The 1min 38sec video shows what appears to be dry, flaky grass jelly, instead of the usual smooth dark product. A spokesman for the NTUC Fairprice has stated that they had clarified with the local manufacturer, and found that the claim is false. Checks done by the manufacturer does not reveal any of the same product having had the same issue as the the one int he viral video. The spokesman also said that the manufacturer has made a police report. Fairprice has also tried to reach out to the man in the video to provide clarifications and to aid in investigation,s but thus far, it has failed to establish contact.

The AVA is also aware of the case and they are also currently investigating. They advised the public to refrain from speculating or sharing unverified claims as they may cause unnecessary alarm.

Chin Chow jelly, also known as Grass Jelly, is one of our favourite local desserts. It can be consumed in its original form or be made into a drink.

So it is not difficult to judge when the jelly has turned bad and become something resembling a soaked sponge that can be shredded into smaller pieces.

A Facebook user, Sng Hock Huat, uploaded a video on May 12 when he found a packet of Tan Soon Mui jelly bought from a NTUC supermarket to be in this state. A video which purportedly shows the packet of Tan Soon Mui grass jelly has been uploaded by a Sng Hock Huat on 12 May has since been shared numerous times.

“Dear fans, we understand a video on a chin chow product is being circulated,” the Fairprice Facebook page said on 13 May. “Thank you for bringing this to our attention,” it said. “We take food and safety matters very seriously and we have since been in contact with our supplier for the product in question.”


Fairprice then asked the creator of the video to contact it directly to aid in the investigation. 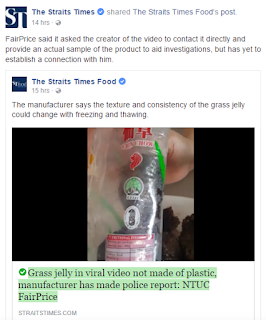 FairPrice said it asked the creator of the video to contact it directly and provide an actual sample of the product to aid investigations, but has yet to establish a connection with him.

The manufacturer says the texture and consistency of the grass jelly could change with freezing and thawing. 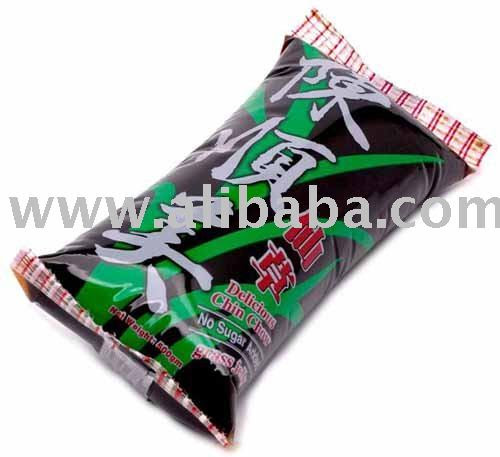 Grass Jelly, is also commonly know as Chin Chow or Xian Cao. It is made of aqueous Extract of Mesona Chinesis(chinese herbal). 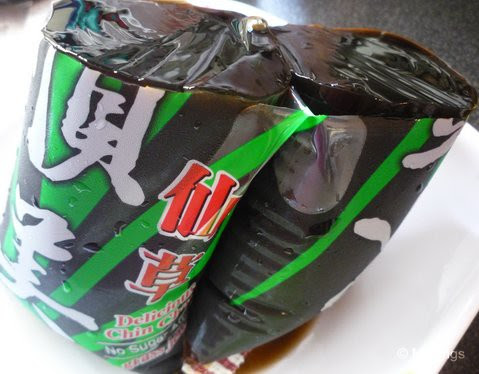 Commonly known as chin chow here, grass jelly made from the extracts of Mesona chinensis‘ stalks and leaves makes a great refreshing and cooling drink.

June is often the hottest month over here. Besides going for water, there are other cooling beverage options to bring the bodily heat down. 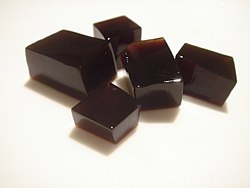 Grass jelly, or leaf jelly, is a jelly-like dessert eaten in Mainland China, Hong Kong, Macau, Southeast Asia, Myanmar and Taiwan. It is made using the Platostoma palustre plant (a member of the mint family) and has a mild, slightly bitter taste. It is served chilled, with other toppings such as fruit, or in bubble tea or other drinks. Outside of Asia, it is sold in Asian supermarkets.

Grass jelly is made by boiling the aged and slightly oxidized stalks and leaves of Platostoma palustre (Mesona chinensis)[1][2] with potassium carbonate for several hours with a little starch and then cooling the liquid to a jelly-like consistency.[1][3] This jelly can be cut into cubes or other forms, and then mixed with syrup to produce a drink or dessert thought to have cooling (yin) properties, which makes it typically consumed during hot weather.

The jelly itself is fragrant, with a smoky undertone,[4] and is a translucent dark brown, sometimes perceived to be black. Food coloring may sometimes be added to make it darker.