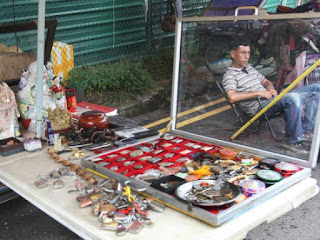 A vendor sits around on a slow weekday afternoon when foot traffic at the Thieves' Market is low. Foto: Ooi Boon Keong / TODAY

Bargain-hunters who enjoy shopping at the oldest & largest flea market here, popularly known as Thieves’ Market, will have until July 10 to do so.

Located between Jalan Besar & Rochor Canal Road, the flea market, which has been a venue where sellers have peddled 2nd-hand bric-a-brac since the 1930s, will shut for good on that day, with the site being needed for ground preparation works for future residential development use, a multi-agency statement said on Tuesday (Feb 14).

A unique hawking zone with a colourful, decades-long history, including a reputation as a spot for trading stolen, smuggled & illegal wares, Thieves’ Market had, in 2011, been shrunk in half to make way for the construction of the new Sungei Road MRT Station. 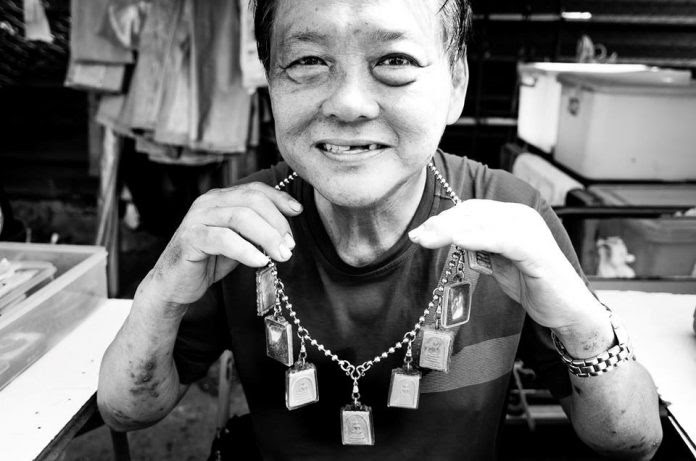 Many vendors have not given up their fight to carry on their business at the Sungei Road Flea Market (Thieves’ Market or Robinson Petang), scheduled to be closed permanently on 10 July 2017. While most will choose to live with the developmental decision under the Master Plan, announced in February, there is an ongoing campaign to preserve the livelihoods and “dignity” of the 200 vendors.

Ms. Biddy Low, part of the team behind the ‘Save Sungei Road Market Campaign’, shared her insights on the initiatives during an interview with The Independent.SG.

Last Friday (June 16), it was reported that the National Environment Agency (NEA) will allocate 40 hawker stalls for 27 vendors from the market. They will also enjoy a 50 per cent rental rebate in the first two years. 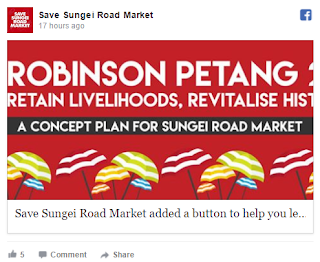 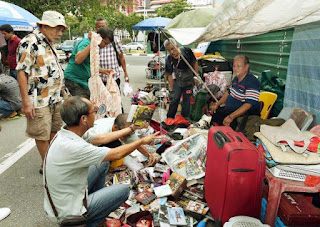 It's official - Singapore's oldest flea market in Sungei Road will close its final chapter on July 10, after eight decades of existence.

Once notoriously known as "Thieves Market" as stolen items were reportedly sold there, the open-air market will make way for residential and commercial developments.

Here are 7 things that you ought to know about this organically formed market before it disappears into the pages of history:

HELP, SUNGEI RD MARKET IS DISAPPEARING, SO MUCH FOR KAMPUNG SPIRIT!

Sungei Road market will soon be gone along with our identity and culture. So much for wanting to preserve our heritage when we end up letting developers steal the market anyway. Where has our kampung spirit gone?

"Seeing this piece of living history disappear is really sad. For all the talk about kampong spirt it seems like we are laying this one to rest, i urge all Singaporeans to go there and check the place out! It is as close to the kampong as you can get in Singapore, the vendors have their own stories of a side of Singapore we don't usually see, beyond the economic miracle and rising skyscrapers , this place reminds Singapore of its humble beginnings.

It's very existence is a great metaphor for Singapore, to the untrained eye all and the ignorant all you will see are a bunch of grumpy old people selling rubbish, but look deeper you will see the pioneers of Singapore and the treasures hidden within their shops. We want to preserve history the same was humanity preserved the dodo bird, in museums and textbooks instead of letting the place be a living breathing exhibition. The ironic thing is, the thieves market is getting stolen by hungry land developers and Singaporeans are being robbed of our identity and culture."

It was announced recently that Sungei Road’s well-known Thieves’ Market, which surely even tourists are aware of, must make way for development (Sungei Road Thieves’ Market to shut for good on July 10; Feb 15).

Yes, progress is a must, but we must try to maintain a balance with heritage. Let us consider what happened to the old National Theatre & Van Cleef Aquarium. They could have been converted into museums, et cetera. Those pieces of land are now just part of Fort Canning Park instead. Likewise, our old National Library was demolished to make way for a road.

Our planners should provide an alternative area for Thieves’ Market. Roadside stalls with minimal rental would be a draw to stallholders & many Singaporeans. 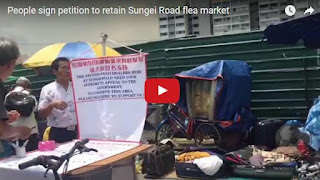 The Sungei Road flea market's last day of operation is on July 10 but the hawkers are hoping to be given an alternative or temporary site that will allow them to continue their business.

Yesterday, Mr Koh Ah Koon, 76, the president of the Association for the Recycling of Second Hand Goods, unfurled a banner at Sungei Road calling for the site to be conserved.

Speaking to The Straits Times later, Mr Koh said he was saddened but hopes an alternative site can be allocated for the hawkers.

The market vendors of Sungei Road Thieves Market have vowed to march from the site of the market to the Istana on 15 July if the government insists on closing the market on 11 July.

This is because the government is effectively cutting off their only source of income and denying them the ability to earn a livelihood in increasingly expensive Singapore.

Koh Ah Koon, who is the President of the Association for the Recycling of Second Hand Goods, declaredt hat if the government insists on disbanding the Thieves Market at Sungei Road, a number of the senior aged vendors would march from the market to the Istana to ask the government and president to give them a fair solution for the loss of their livelihood.

Sungei Road flea market to shut down on 10 July 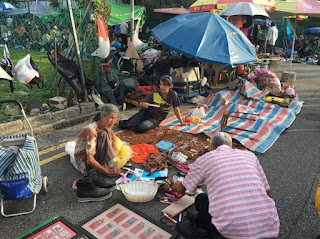 After being around for more than eight decades, the Sungei Road flea market, also known as the Thieves Market, will cease to exist on July 10 this year.

The site where the market is located currently will be “used for ground preparation works to facilitate future residential development use”, according to a joint statement issued by the National Environment Agency (NEA), Ministry of National Development, Ministry of Social and Family Development, Workforce Singapore, National Heritage Board (NHB) and Singapore Police Force.

The statement also noted that of the 31 rag-and-bone men who were issued permits to operate on the streets in the 1970s to 1980s, only 11 still operate at the flea market.

The Government will take back the site of the flea market, which is located between Jalan Besar and Rochor Canal Road, for ground preparation works for future residential development use.

The joint statement said, “The Government has assessed that such street trades should only be allowed to continue in designated venues like trade fairs and flea markets, rather than on a permanent basis, to minimise disamenities to the public.” 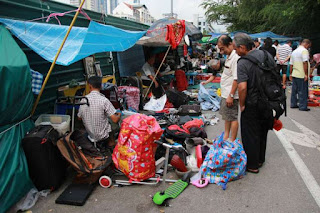 The authorities issued a multi-agency statement yesterday which gave July 10 as the last day of operations for the approximately 8-decade-old flea market.

Last day of Thieves' Market at Sungei Road on Jul 10

The last day of operation of the iconic Thieves' Market at Sungei Road will be on Jul 10 this year, marking the end of an era for many S'poreans.

The city-state's largest and oldest flea market has been operating since it emerged as a small trading spot along the river in the 1930s, & gained its nickname due to its reputation for stolen, smuggled and illegal goods after the Japanese Occupation.

On Tuesday (Feb 14), the National Environment Agency (NEA), Ministry of National Development (MND), Ministry of Social & Family Development (MSF), Workforce Singapore (WSG), National Heritage Board (NHB) and Singapore Police Force (SPF) said in a joint press release that the site of the market will be used for "ground preparation works to facilitate future residential development use".

6 things you ought to know about Sungei Road Thieves’ Market 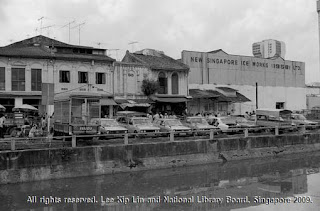 The Singapore Ice Works was built in the 1930s and situated near the road, which is why that area is also fondly known as Kek Sng Kio, which literally means Frosted Bridge, by the Hokkiens and Teochews

Sungei Road Thieves’ Market is the original flea market in Singapore established in the 1930s.

It will be no more come July 2017 to make way for the Sungei Road MRT station. That’s more than 80 years of history situated in Jalan Besar eradicated in one fell swoop. The market is currently open from 1pm to 7pm daily. Its ragtag group of peddlers sell everything from pre-loved to broken items with questionable resale value.

Here are six things you ought to know about Sungei Road Thieves’ Market:

Located between Jalan Besar and Rochor Canal Road, the flea market at Sungei Road is Singapore’s largest and oldest flea market. While the exact origin of the flea market remains unclear, historical records have shown that the flea market began as a small trading spot that sprouted along the river during the mid 1930s.

In the past, the flea market operated between 3.00pm to 6.00pm and its operating hours could have resulted in its nickname "Robinson Petang" or "Robinson in the afternoon". The nickname was probably a tongue-in-cheek reference to the Robinson Department Store which catered to the more well-to-do in Singapore.

During the Japanese Occupation (1942 – 1945), the flea market at Sungei Road was very popular as many locals (especially the poor) would flock to the market to purchase cheap household items and other merchandise which were often in short supply. 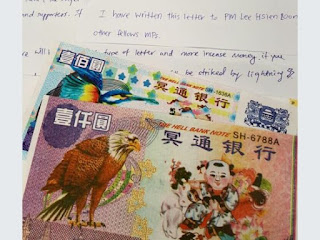 Responding to media queries, the police confirmed that reports have been lodged." We are unable to comment further as investigations are ongoing," a police spokesperson said on Sat (Apr 29).

A copy of the handwritten letter, addressed to "PM Lee Hsien Loong & the other MPs" was also sent to TODAY, expressing anger that the Sungei Road flea market - which will be shut to make way for development from July 11 - will not be relocated.